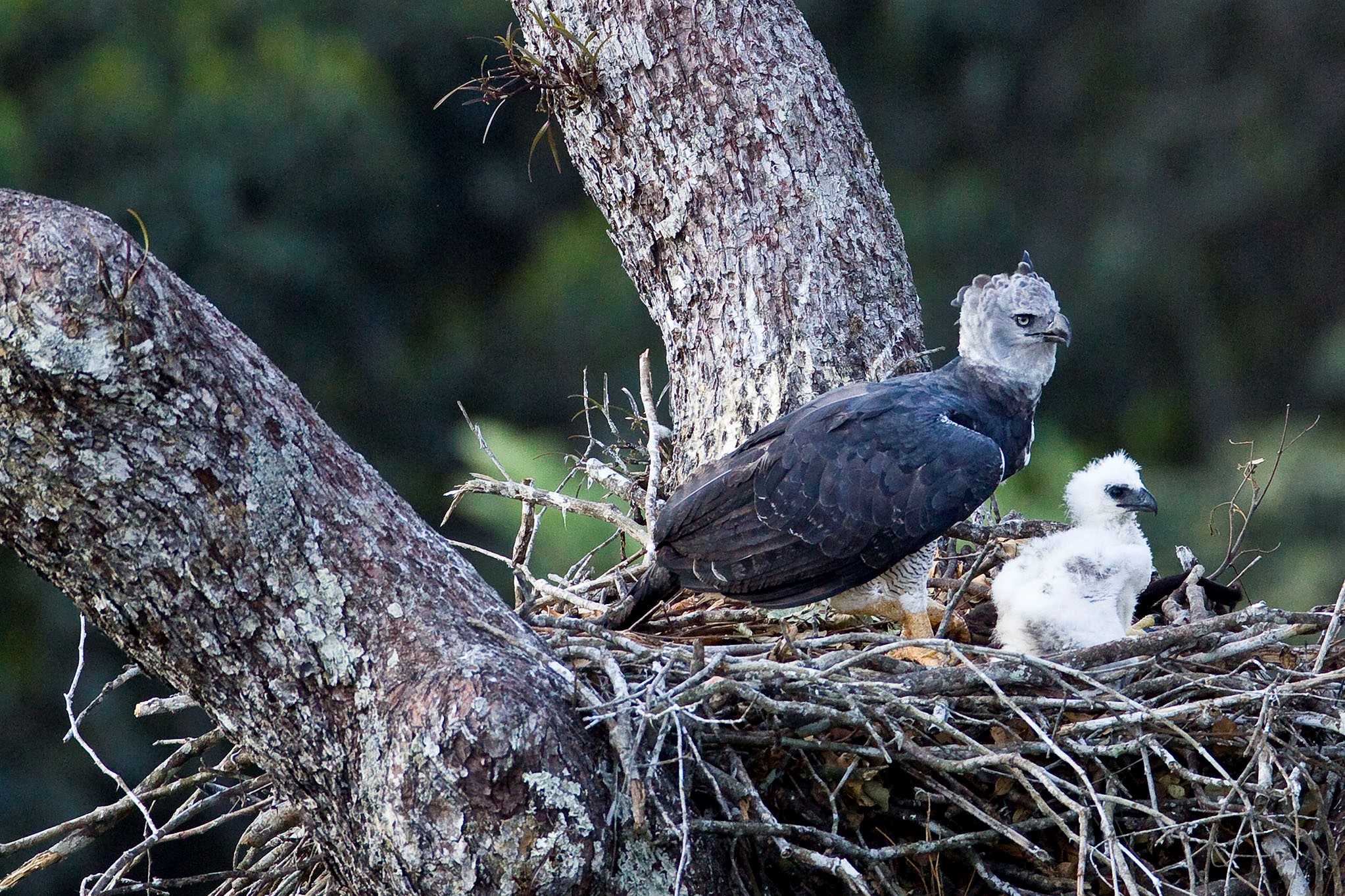 The harpy eagle (Harpia harpyja) lives in tropical forests stretching from the south of Mexico to the north of Argentina. But it’s in the Brazilian Amazon that a project has been working intensively for its conservation for more than 20 years.

Created in 1997, the Program for the Conservation of the Harpy Eagle by the National Institute for Amazonian Research (INPA) — also known as Projeto Harpia — surveys the nests of harpy eagles in the states of Pará, Amazonas and Rondônia, as well as areas of the Pantanal and the Atlantic Forest.

Thanks to the work of researchers, students and volunteers, 120 nests are now being monitored in Brazil. According to genetic studies, it is estimated that there may be still some 5,000 harpy eagles in the Amazon and 300 in the Atlantic Forest.

The work of surveying these nests is far from easy. Harpy eagles are very discreet animals. Despite being among the largest eagles, the birds are very well camouflaged inside the vastness of the forest. “There are, of course, many individuals of whom we are not aware. And it’s very difficult to find one of these nests in the middle of the preserved forest,” says Carlos Tuyama, the Projeto Harpia coordinator for the state of Rondônia.

The birds build their nests in emergent trees, those whose branches rise above the average canopy layer. “The nests are usually 2.5 meters [8 feet] in diameter and always perched in the tree’s main fork,” Tuyama says.

He says the female normally lays just one egg, or occasionally two, but typically only one eaglet will survive​. The mother eagle incubates her egg for 58 days and, after it hatches, stays by the eaglet’s side for another 80 to 90 days.

“Only after this period the mother eagle goes back to hunting, once the eaglet is of a more robust size, able to defend against threats that come to the nest,” Tuyama says. “Eaglets normally start flying at 5 months, but they still depend on food brought to them by their parents until the age of approximately 18 months.”

While the female cares for the eaglet, the male scours for food — medium-sized mammals like sloths and primates, as well as other birds — and brings back green branches for nest maintenance.

A new eaglet in the forests of Rondônia

Four years ago, the Projeto Harpia staff in Rondônia began monitoring a recently discovered harpy eagle couple that was rebuilding a nest at the time. Later, they accompanied the development of the couple’s eaglet, a male. But when the eaglet was around 15 months old, the tree in which the nest was located fell down. And yet the bird remained there for a number of months before dispersing. In general, young harpy eagles abandon their birth region for new territory.

“After that we kept going back there to this fragment of forest to try to find the tree that the parents had adopted for their new nest. We spent almost two years looking, but there was no sign of them,” Tuyama says.

Some time later, a resident of the region in the municipality of Rolim de Moura reported two harpy eagles in the area, around 4 kilometers (2.5 miles) from the fallen tree.

It was the same couple. In November and December last year, a new pairing occurred, and between Feb. 17 and 18 this year, an eaglet hatched. Since then, Projeto Harpia has been closely monitoring the development of the eaglet, which is growing healthily.

At around 45 days old now, it remains constantly protected by its mother. This is also the age at which it begins to practice using its claws, clutching the remains of a prey left in the nest by its father.

The essential work of conserving the species

The efforts made by Projeto Harpia over the past two decades are not limited to the surveying of nests. It has also carried out environmental education, raising awareness in surrounding communities and collecting scientific data.

Community engagement is important for the conservation efforts. Tuyama says many of the nests are discovered by Brazil nut harvesters, who scour the trees once a year to gather the fruit and end up coming across the birds and their possible eaglets.

“This is why partnerships with the harvesters who crack Brazil nut burrs and with the indigenous people is the best way to discover these nests,” Tuyama says. He emphasizes the importance of frequent visits and conversations with the local communities and attempts to dissuade farmers from deforesting.

In Rondônia, 50% of known nests are on indigenous lands or protected areas, and 50% are on private properties (legal reserves). Loss of habitat, in the form of deforestation, continues to be the main threat to the harpy eagle’s survival.

Like all predators at the top of the food chain, the species is vital to maintaining balance in its environment. “For example, without the harpy eagle, there would be a much higher number of primates, and, over time, this would lead to a different landscape in that microregion,” Tuyama says. “Many more primates, eating leaves and fruits, would change the consistency of the vegetation.”

But thanks to Projeto Harpia, its dedicated professionals and volunteers, new eaglets, like the one in the video below, are managing to prosper and flap their wings at the right time.