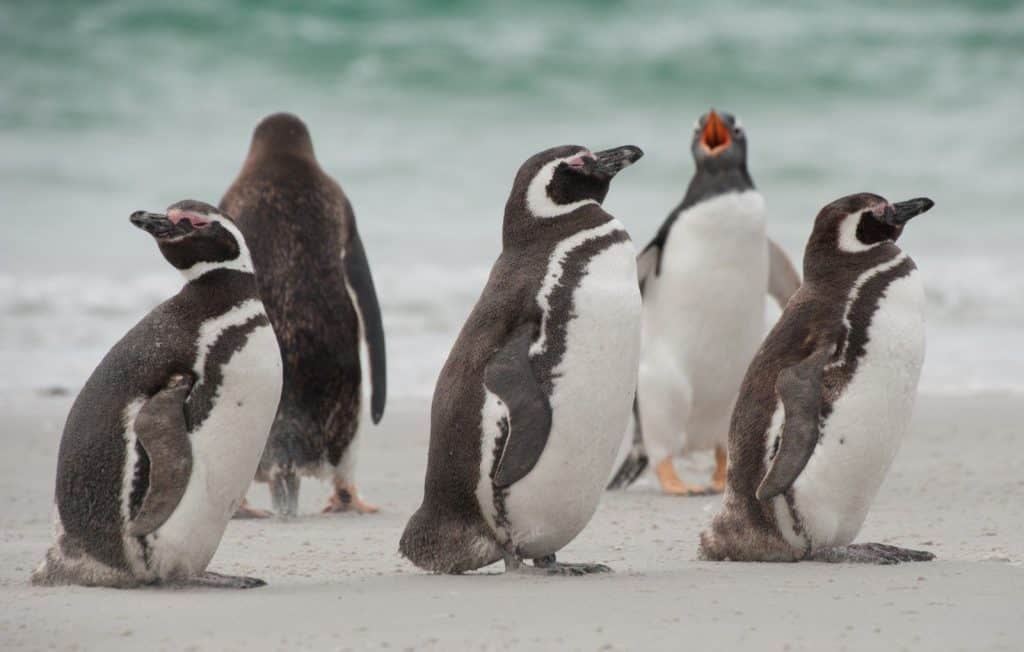 “It is with some consternation that seabird biologists return to colonies they haven’t visited for many years.

The hand of man has seen many colonies around the world dwindle or even vanish.” Fortunately, for some species a little conservation goes a long way.

Esteban Frere, South America Coordinator for BirdLife’s Marine Programme, started his career as a biologist by studying the Magellanic Penguin Spheniscus magellanicus. He recently returned to Patagonia to help survey some of the colonies there.

Magellanic penguins are probably not the penguins most people think of when they hear the word ‘penguin’. They may have the classic monochromatic colouration, but they have a splash of pink around the face.

Unlike the stereotypical picture, most nesting colonies are not surrounded by snow and ice – many are found in warmer climes, where the birds dig burrows for nests to protect themselves and their chicks from the direct sun. Like all penguins though, they have definite charm, and are masters of the ocean (if not the land).

Large-scale surveys of Patagonia’s penguins have not been conducted since the 1990s, when Fundación Patagonia Natural and the Wildlife Conservation Society (WCS) carried out comprehensive surveys of the seabirds and marine mammals of the Patagonian coast.

Over the last two years, a group of Argentinean researchers from the Universidad Nacional de la Patagonia Austral (supported by BirdLife International, WCS and Fundación Temaiken), have been surveying and assessing the population size of Magellanic penguin colonies along the southern coast of Argentine Patagonia in Santa Cruz province.

Most of these colonies have not been surveyed for almost 25 years, when some of the same researchers (once enthusiastic young seabird biologists….now enthusiastic, slightly older seabird biologists) participated in those early studies. That includes me…I’m sure you’ll agree from the pictures that I haven’t aged at all.

Left: Never-before-seen pic of Esteban Frere in the 90s. Right: Frere in his most recent visit.

It is with some consternation that seabird biologists return to colonies they haven’t visited for many years. The hand of man has seen many colonies around the world dwindle or even vanish – and this has happened within human lifetimes.

Indeed, in recent decades, many of the threats to penguins along the Patagonian coast have grown in importance – including fishery interactions (bycatch), climate change, habitat destruction – though others, like oil pollution, have declined. These changes are one of the reasons that it is so important to return to Patagonia and understand the trend of the penguin population.

Fortunately, my return to survey these colonies was a positive experience. Not only was great to spend time away from an office and among a bustling colony, but our preliminary results indicate that the Magellanic Penguin population in the extreme south of the Argentine Patagonia has remained stable, with numbers of breeding pairs very similar to those reported in the 90s.

This is a consequence of both luck and conservation action adopted by the government. Luck, because many penguin colonies are far from the big cities and access to them is difficult – so some of the issues of habitat destruction and disturbance facing colonies closer to human habitation are not so relevant here.

But at the same time, the national and provincial governments have created marine parks along the Argentinean coast and the community has lobbied for measures to reduce oil pollution at sea and human disturbance in the colonies. These conservation measures have surely helped to protect the Magellanic penguin colonies in the south of the country.

More work and effort is needed to minimize threats on the high seas, but the current situation looks like a good start. I hope my next trip to these colonies isn’t another 25 years in the waiting – and that the penguins there continue to benefit from conservation efforts.

This article was first published by BirdLife International on 12 Dec 2016.