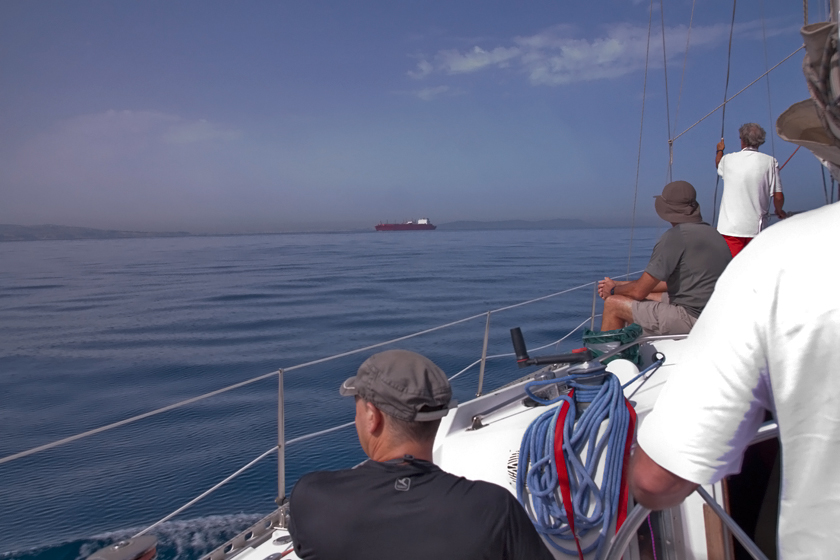 I had a lovely day out on Saturday with a group of friends in a charter yacht on The Strait. The outing had been organised by Alexandra Farrell and we all met up at Tarifa’s port and boarded our vessel the

for the day and met the skipper Pepe Fernandez.

Calm waters meant we motored all day as there wasn’t enough wind to set any of the sails on the 14m yacht. I suppose it gave greater visibility and we were able to get out quickly to where the whales and dolphin species could be found.

Most of the Cory’s Shearwaters were of the Mediterranean race

Birdlife International do not split these birds and offer this explanation:

‘Taxonomic noteCalonectris diomedea (Sibley and Monroe 1990, 1993) has been split into C. diomedea and C. edwardsii following Hazevoet (1995), contra Brooke (2004). Calonectris diomedea (Hazevoet 1995) was split by Sangster et al. (1998) into C. diomedea and C. borealis. However, this treatment is not followed by the BirdLife International Taxonomic Working Group because morphological and genetic differences between the two taxa are slight, similarly large divisions exist within diomedea as between diomedea and borealis and qualitative differences in voice do not necessarily amount to isolating mechanisms. ‘

We had a few good pairs of eyes on board

and also saw a few

which is a pretty distinct identification feature in separating ‘Stormys

The Sperm Whale is a toothed whale that lives in pods. It has a huge brain that weighs about 20 pounds (9 kg); it is the largest brain of any animal. The Sperm Whale has a single blowhole that is s-shaped and about 20 inches long. The blowhole is located on the left side of the front if its huge head. The whale has a 4-12 inch thick layer of blubber.

Sperm Whales are the largest toothed whales with teeth on the lower jaw only.

The four-chambered heart of the average sperm whale weighs about 277 pounds (126 kg) – about as much as two average adult human beings!

Our Cory’s Shearwaters breed on islands and cliffs in the Mediterranean. Atlantic birds in Europe have outposts in the Atlantic at the Canary Islands (Spain), Berlengas Islands and the Azores (Portugal).

After breeding, birds from the Atlantic colonies predominantly winter off the coast of South America and southern Africa, with some individuals from the Mediterranean wintering in the area of the Canary current (