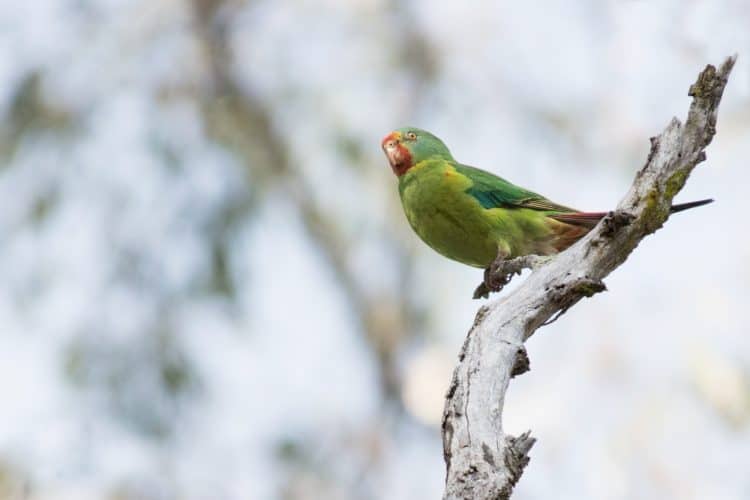 This year, the Critically Endangered Swift Parrots visited the Mt Annan Botanic Gardens in western Sydney. There estimated to be no more than 2000 of them left in the wild.

These attractive little parrots breed in Tasmania and fly north to the mainland in winter. While on the mainland, Swift parrots are nomadic, following the flowering eucalypt trees, which makes it very tough to predict where they may turn up.

So when the records of sightings at Mt Annan Botanic Gardens popped up on a local birding Facebook group, I jumped to the chance of spotting the rare visitors.

I found the parrots (4 of them) in the same patch where they have been sighted in the few days prior, which also happened to be occupied by a colony of the aggressively territorial Bell miners.

As they usually do, the parrots spent their time feeding in the upper canopy and each time they attempted to land on the lower branches the Bell miners swooped in and chased them away to my dismay. Yet of all the native vegetation in the 416-hectare gardens, the parrots insisted on staying in the Bell miner colony.

I spent a good amount of time watching them, but they never descended low enough for a decent photo opp.

Apart from the Swift parrots, there were plenty of Musk lorikeets, Red-rumped parrots, Galahs, Sulphur-crested cockatoos, Eastern rosellas, Rainbow lorikeets and even Little lorikeets in the gardens.

In fact, there have been so many different species of parrots around this winter, that I wrote a post dedicated entirely to finding parrots in Sydney. Some species, like the Yellow-tailed black cockatoos, can be found in Centennial Park, minutes away from the city center!