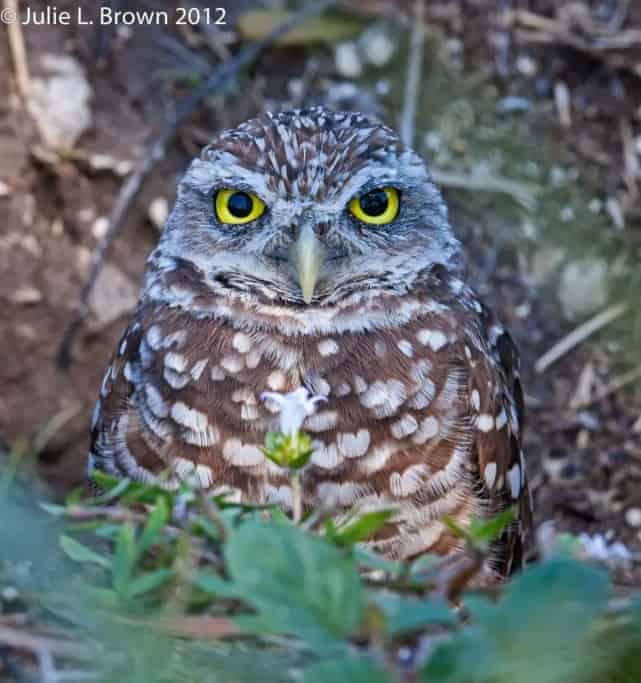 My first meeting with one of the Cape Coral Burrowing Owls was at a vacant lot on an early-spring afternoon. An adult owl stared up at me with lemon-yellow eyes just above the rim of a shallow depression in the dirt, which was decorated with the remains of a leather boot, a dirty white rag, and other bits of trash. After seeming to determine that there was no threat, the owl ambled out of the burrow to a “T” perch a few feet away to observe me from a higher perspective.

When the adult left the burrow, four youngsters crowded the entrance to get their own heavy-lidded looks at me.Eventually two of them must have felt safe enough to venture out on their own, although they did not stray far from the burrow.

Trying not toencroach upon their territory as I photographed them, I made sure to stay on the sidewalk to minimize the stress of my presence on the owls.I realized later when I processed the images, that the initial behavior of at least one of the juveniles was defensive (vocalizing and wing displays). Eventually the owlet took a comfortable seat in the weeds, yawned, closed its eyes and appeared to nap.

It was not by accident that I had found Burrowing Owls in Cape Coral. Prior to my visit, I had discovered my tour guide, theOwl Lady, through her website.This friendly and knowledgeable womanactively monitors burrows, gives tours, and has a burrow in her own suburban yard, complete with custom perch and a web cam.

In North America, the overall conservation status of the Burrowing Owl is “Bird of Conservation Concern” with the majority of threatened or endangered populations residing in thewestern states.Historically a bird of the prairiethe Florida subspecies ofBurrowing Owl (Athene cunicularia floridana)has been pushed out of its native habitat by development, but these diminutive owls have become well-adapted to human-environments. They prefer to nest in open areas with very short vegetation. However, if the vegetation is not kept short, the owls cannot see predators and will abandon the site.

TheCity of Cape Coralis committed to a managed development plan that makes the welfare of the Burrowing Owl a high priority. Statistics show that nesting success rates are higher in areas of the city that are between 50 and 75% developed. With more than 1000 nesting pairs here, community leaders and volunteers have made a concerted effort to protect them. Residents interested in helping to maintain burrows in their neighborhood may participate in the “Adopt a Burrow” program.

Visitors to Cape Coral are encouraged to schedule a guided tour to see the owls. Cape Coral Friends of Wildlife will also be having their 11th annual Burrowing Owl Festival on February 23, 2013.

The time spent with these adorable little owls was a special experience for me. I feel fortunate that they allowed me to photograph them. To view the entire gallery of images from my visit with the Cape Coral Burrowing Owls, click here.