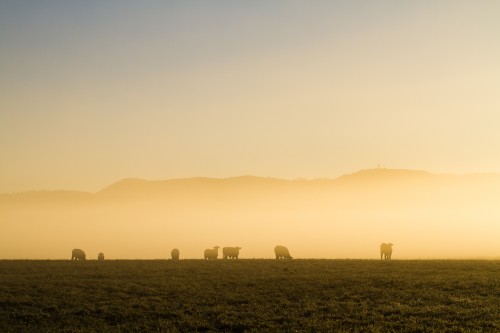 While in the Killarney area, I had the privilege of being allowed access to a property called “the Lakes”.

This property is on the outskirts of town (actually in Loch Lomond rather than Killarney) and has the distinction of having one of the few permanent naturally occurring water sources in the region.

The shallow lake usually has water even in the worst droughts, and at the moment it is larger than ever due to the regular rains Killarney has been experiencing for the past few years.

The Lakes mainly runs cattle, but the owner also keeps various other livestock such as pigs, sheep and ducks.

The lake itself is fenced off with barbed wire, so that cattle do not get bogged around the edges.

Not surprisingly, the lake attracts a wide variety of birdlife. Swans, ducks, spoonbills, egrets and waders are present in the lake itself, while small passerines feed and breed along the fringes. This density of species attracts eagles, falcons, goshawks, and harriers.

The few gum trees away from the water have corellas, cockatoos, lorikeets, rosellas, and other parrots. In winter, however, the variety of species is less than in other times of the year. I visited the lake twice – once at the end of July and once late in August.

The first time I visited at dawn, which was extremely cold and frosty, although the temperature soon got warmer once the sun had burned away the mist. The second visit was late afternoon. Both times the weather was fine with no wind, and the light was very beautiful during the “magic hours”.

On the first morning, I was mainly concentrating on photographing the Black Swans with their cygnets, trying to capture them in the mist but also as the first rays of light penetrated to set off the reds and whites of their plumage.

But I soon became aware of the other birdlife and photographed Black-winged Stilt, Royal Spoonbill, Yellow-billed Spoonbill and Straw-necked Ibis. But perhaps the highlight of the first morning was the visiting flock of about 60 Plum-headed Finch, quite an uncommon bird across its range.

The second visit was much different. I had mainly returned to try to get better images of the Plum-headed Finch, but they were not at the lake. Disappointed, I just set up in one location and observed the activity for a few hours, during which time several raptors hunted the lake fringes. The first was a dark-morph Brown Falcon, which harassed a pair of Masked Lapwing.

Next came a Spotted Harrier, which flushed out a Latham’s Snipe and then attempted to catch Golden-headed Cisticola. A commotion alerted me to the next raptor – a Brown Goshawk flying fast and low across the lake and causing most of the birds to fly, although they were pre-warned by the Little Corella flock perched high in a gum tree so the goshawk’s ambush was unsuccessful.

All the while, Australian Hobby, Nankeen Kestrel and Black-shouldered Kite were constantly active. All in all, there was plenty of action and I just wish I had had a longer lens than my 70-300/4-5.6!