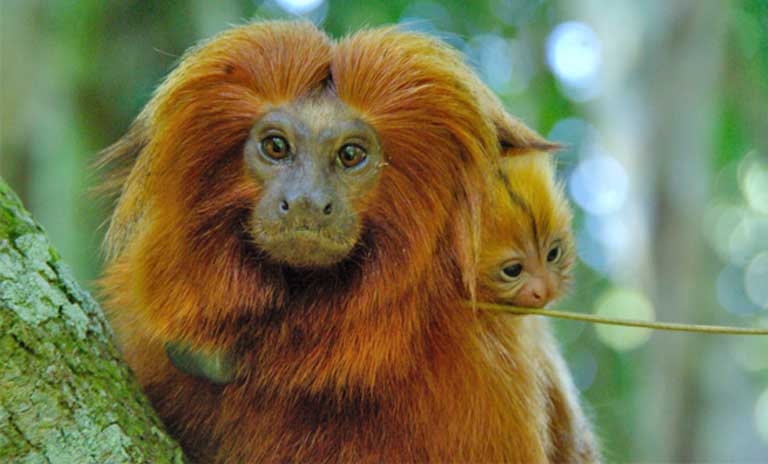 In April 2018, workers with the Associação Mico-Leão-Dourado, a Brazilian NGO dedicated to the protection of the golden lion tamarin, found one of the endangered primates, apparently sick and unable to climb trees, lying on the forest floor in Aldeia, some 80 kilometers (50 miles) northeast of Rio de Janeiro city.

The following day, field staff searched for the animal but could not find it within the sprawling tropical forest. But later that month, the dead bodies of two others were discovered in nearby forest in Cambucaes and Imbaú.

By 17 May 2018, their worst fears were realized, as the first confirmed death of a golden lion tamarin due to yellow fever was announced by the Brazilian Ministry of Health and Ministry of the Environment.

“Until this report we didn’t know if the [animals] were susceptible to the disease, even after four decades of working with the tamarins, but we now understand that they are even more susceptible to it than humans,” explains Dr. Carlos Ruiz, president of the Associação Mico-Leão-Dourado (the Golden Lion Tamarin Association).

Known for their distinctive, lion-like manes and gold-orange pelage, the golden lion tamarin, or Leontopithecus rosalia, is a primate endemic to the Atlantic Forest biome that once stretched uninterrupted for hundreds of miles along Brazil’s eastern coast, but which has since been reduced to only patches. By the 1980s, L. rosalia was critically endangered due to habitat loss and extremely high levels of poaching.

By then, the population was down to just a few hundred individuals in isolated forest fragments scattered around the São João river basin in Rio de Janeiro state. However, a hugely successful campaign of intensively focused conservation action, including the introduction of zoo-born tamarins to wild populations, raised that number to3,700 by 2014.

Then came the outbreak of yellow fever, in late 2017-18, Brazil’s largest human epidemic since mass vaccinations began in the 1940s. The mosquito-borne disease, normally found in remote reaches of the Amazon, spread to the populous southern states of Minas Gerais, Rio de Janeiro and São Paulo, killing hundreds of people and infecting thousands more.

Scientists, alerted by the first yellow fever casualties in 2018 among the golden lion tamarin, were astonished to see the species decline by 32% due to the disease, a terrible setback for an animal already classified as Endangered by the International Union for Conservation and Nature (IUCN).

Compounding the crisis was a misinformed reaction to the yellow fever outbreak by local people who made a spurt of attacks on all monkeys, apparently based on the false belief that tamarins, rather than mosquitoes, were capable of directly transmitting the disease to humans. Some primates were illegally killed by poisoning and others shot dead with rifles.

“The impact of yellow fever has been absolutely devastating” on these primates, especially the tamarins, says Dr. Ruiz. “It could set us back 30 years of conservation efforts.” He does report some good news: Charity service volunteers are now continuously monitoring the surviving tamarin populations, aiding local health officials to ensure near 100% vaccination of people in stricken areas, and the regular exchange of information with government bodies to help prevent further significant outbreaks.

One time epidemic or ongoing scourge?

Yellow fever is believed to have originated in Africa and spread to Brazil as a result of the transatlantic slave trade. The disease first appeared in Recife, northeast Brazil, in 1685, according to historical records. However, yellow fever is not endemic to the majority of the country, and therefore most monkeys have not developed resistance to it, leaving them particularly vulnerable, according to the Brazilian Society of Primatology.

How, or whether, tamarin populations will bounce back after such significant losses remains unknown.

“The biggest problem is how these species then recover from crashes,” says Karen Strier, an anthropologist at the University of Wisconsin who has studied Atlantic Forest monkeys since the 1980s. “Either they must reproduce within the surviving group… or they must look to recruit from other populations. But the more fragmented the landscape the more difficult [recruiting] is.” The trouble with reproducing within just one group is that “if the population is small that may not work, and it also produces low genetic diversity.”

Ominously, primate experts now fear that yellow fever outbreaks could become a regular occurrence in the Atlantic Forest biome, and that disease could be a looming new threat to the golden lion tamarin, even as illegal trafficking remains a serious concern.

“From time to time, [yellow fever] reemerges… and may affect regions beyond the Amazon, if it has viability of transmission,” says a spokesperson for the Brazilian Society of Primatology. “But it could become an endemic disease also of the Atlantic Forest.”

A combination of climate change and deforestation in areas that serve as buffer zones between tropical forest and urban areas has allowed yellow fever to spread, the society representative added. Logging and charcoal production, agriculture and urbanization have devastated the tamarin’s habitat, reducing it to only 2% of its original area in the Atlantic Forest, home to 22 of Brazil’s 77 primate species.

The promise of a vaccine

Hope is now focused on a newly developed vaccine for non-human primates that could immunize species like the golden lion tamarin and perhaps save them from disease and help them evade extinction.

Marcos Freire, a researcher at the Oswaldo Cruz Foundation in Rio de Janeiro, who previously worked on a team producing a human yellow fever vaccine, has been seeking an alternative for primates since 2017, and thinks he now has one that could work.

“We would like to vaccinate some of these animals and then transport them back to areas where there have been mortalities,” he says. “But nobody has ever vaccinated a species of monkey before and so there are a lot of challenges.”

Freire says that he is currently applying to the nation’s Ministry of Health and Ministry of Agriculture for permission to capture and immunize wild populations of tamarins. “In Brazil, there have not yet been any licenses to administer vaccines for non-human primates,” he says. “Dogs, cats and cows, yes — but not primates.”

The vaccine, which he initially hopes to use on 500 primates, is based on a dilution of the yellow fever vaccine administered to humans, and uses a similar process and formula. “We applied different quantities of dosage to species in our primate center in Rio de Janeiro and the results have been effective,” he reveals.

But practical challenges remain: How, for example, “would you test it on animals that are critically endangered?” asks Strier, who supports the vaccine’s development. “And how do you administer it to animals in the wild in a cost-effective way? And what about the fact that there are humans that still haven’t been vaccinated?”

Even if these hurdles are overcome, vaccination won’t entirely eliminate the disease because some female mosquitoes pass the virus directly to their eggs. Meanwhile, other solutions offer promise, such as neutralizing mosquitoes by means of genetic modification, as explored in the case of the Zika virus; or using mathematical models to anticipate the arrival of the virus in various locales in order to immediately combat it.

The vaccine, should it prove efficacious, could offer important relief to these endangered primates, even as other human disruptions put heightened pressure on ecosystems in southeastern Brazil.

No matter what the results, ongoing vaccine research will offer “a good opportunity to learn what happens,” concludes Freire. “Do the [tamarins] survive because they are immune, or not infected? Any kind of [observed] result will be important. Because if every year we get another episode [of yellow fever and lack an effective response], then we’ll have to go back to captive reproduction.”

This article by Peter Yeung was first published on Mongabay.com on 26 March 2020.