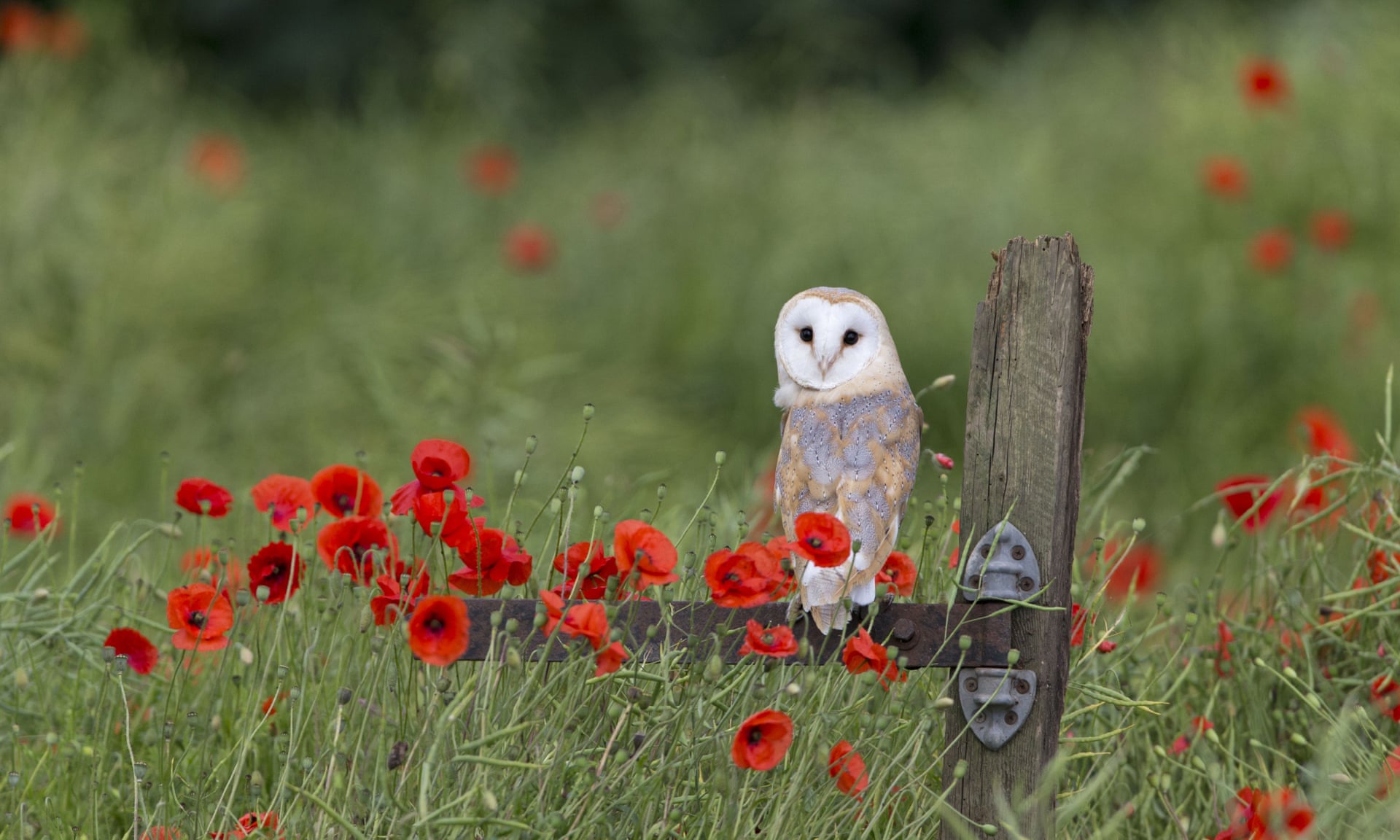 My mum fist-pumped when I told her I had seen a barn owl using a nest box on our farm. She has been trying to coax them in since she moved here 35 years ago.

There were signs the owls might be thinking of settling down – we found a pellet (regurgitated fur and bones from rodents) at the base of a nest box in February and splatters of poo below another box. Then last week the eureka moment came when one flew out of a box.

My brother built the first boxes (along with a few dozen broody chicken coops) 17 years ago as a punishment for getting suspended from school.

Dad built a few more during a brief attempt at retirement and now we have eight of these bulky boxes nestled in the boughs of oak trees around our Kent farm.

Lynne and Peter Flower – who volunteer for Kent Wildlife Trust and are licensed with the British Trust for Ornithology (BTO) to monitor boxes in the local area – came to look inside ours and found various bit of avian paraphernalia, including sticks brought in by a jackdaw, an egg (probably from a stock dove) and pellets (which barn owls shred to make nests). A kestrel had claimed one of the other boxes as its own.

Monitoring nests is crucial because it provides the BTO with information about where the species is doing well.

Before climbing the ladder to peer into the nest, the Flowers scraped a stick around the bottom of the tree to let the barn owl know it had visitors.

Barn owls are generally gentle, unlike tawny owls which can be aggressive.

Our owls are not yet nesting and were not at home when the Flowers visited. They might not have decided about their partners, but the presence of pellets in a number of boxes suggests they are thinking about it. “They’re as fussy as we are, they won’t take just anybody,” says Lynne.

Our mini success is one that has been repeated all over the country. In 1987 barn owls were at their lowest ebb with around 4,500 breeding pairs, havingdeclined by 70% since 1932. Now there are up to an estimated 12,000 breeding pairs in the UK.

Historically, these distinctive birds with their heart-shaped faces, demonic shriek and silent flight, would have been a farmer’s friend because they gobble up rodents. Special “owl windows” were even created in barns to encourage them to nestle in between beams and loft spaces. But from the mid 1800s, agriculture was intensified and tussocky grasses full of mice and shrews were ironed out.

In 1988 their fortunes started to change again thanks to the work of Colin Sawyer, who set up the Barn Owl Conservation Network with the aim of doubling the population by 2020. For the first decade his team focused on recreating habitats but by the mid-1990s he realised it was nesting sites barn owls needed the most – old barns had been demolished or renovated, and councils had chopped down cavernous old trees where the birds might have lived.

More than 20,000 boxes have been put up nationally, with Sawyer installing 4,000 personally. “It’s still a great privilege to get up to a box and see it’s being used, with five chicks looking out at you. We are fortunate, as it is a species that has big charisma and appeal,” he says.

Every county in the UK has someone putting up barn owl boxes. In 2013, Kent Wildlife Trust decided the barn owl would be its flagship species– the logic was that promoting habitats for barn owls was good for lots of other wildlife too – and built about 40 boxes around the Sevenoaks area, during which time the population has increased.

Lots of barn owls are nesting late this year. Historically, owl numbers rose and fell with field vole populations. Sawyer says: “Once upon a time I could predict from one year to the next when they’d start breeding and how successful they’d be. In the past six years it’s been all over the show.”

He’s not sure why these changes are happening, but says it could be down to climatic extremes.

Lockdown may be good for barn owls – reduced noise from traffic may allow them to hunt more efficiently and there will probably have been fewer road deaths. “Lots of barn owls are killed on the road because they’re not looking – they’re listening and looking at the ground,” says Lynne.

Owls look quite angelic but they live a savage existence, never far from hunger. They incubate eggs as soon as they lay them so the birth of their chicks is staggered; in tough years only the oldest will survive and the rest will starve. In times of plenty the whole brood flourishes. They feed their chicks for 50 days, by which time they need space to stretch their legs and gain strength, which is why some of the more elaborate nest boxes have little balconies attached.

Barn owls are modern families. “We’ve found that a pair might become quite loyal to a box and while they’re pairing up and mating, they’ll be in the box. If a female starts laying, the male will often roost somewhere else,” says Lynne. “Once they’ve got young he will definitely move somewhere else and he will bring in food. When the young get really big she will also roost somewhere else possibly, so all these roost sites are really important to them.”

Like much of the country, Kent has got its barn owls back, and their boxes are an eccentric addition to the countryside. Andrew Lewis, who lives in Sevenoaks, got in touch with the Guardian to share his lockdown picture of a local barn owl hunting on the fields next to his residential street. The fields have been left fallow and barn owls are now regular visitors.

He says: “We do sometimes feel like frauds when watching wildlife diaries at the end of David Attenborough, as they explain the trials and tribulations of capturing footage. We sit down with a cup of tea until the owl appears and then I change out of my dressing gown, nip down to the back fence and get some photos while it spends up to an hour hunting.”

Through an army of dedicated local volunteers, Sawyer’s ambitious targets have been smashed: barn owl numbers have nearly tripled and he doubts they will be able to climb much higher. Up to 80% of barn owls now nest in man-made boxes.“If all those boxes fell down we’d probably see extinction. I don’t know of any other species that is so reliant on one component of their habitat – a nest box – for their survival, and that’s all done by people,” says Sawyer.

This article was first published by The Guardian on 11 June 2020. Lead Image: Barn owls are usually gentle, unlike tawny owls which can be aggressive. Photograph: FLPA/Rex/Shutterstock.