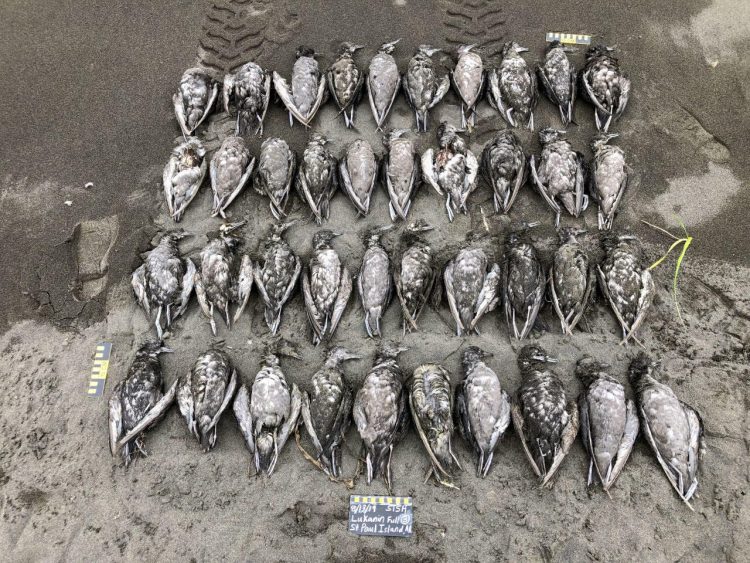 The first reports came in May. They were sparse, but enough to put seabird-monitoring coordinator Hillary Burgess on edge. “Here we go again,” she thought. By late June, almost every time she checked her inbox, yet more news of washed-up seabirds on the Alaskan coast greeted her.

Volunteers had collected nearly 9,200 seabird carcasses by early September—and those are just the bodies found washed ashore. Kathy Kuletz, a U.S. Fish and Wildlife Service wildlife biologist, estimates the total number of deaths may reach in the hundreds of thousands.

Historically, mass seabird die-offs have been occasional events in Alaska, but for the past five years, they have occurred annually.

This year, as the carcasses continued to pile up, a few new trends became clear: The die-offs were more geographically widespread and lasted for a longer period compared to previous years, and they largely targeted Short-tailed Shearwaters, although dead puffins, murres, and auklets—the main victims in recent years— have also been found.

“There’s a lot of concern out there,” says Burgess, who works for theCoastal Observation and Seabird Survey Team(COASST), a community-science project that tracks populations and deaths.

“People aren’t used to encountering hundreds of dead birds on a beach that they walk on regularly.”

Scientists say the most obvious explanation for the consistent die-offs since 2015 is warmer ocean temperatures. However, despite years of tracking efforts and study by numerous organizations, much remains unclear, including what exactly has triggered each year’s deaths and why different species are affected in different years.

What scientists do know is that seabirds, as well as other marine wildlife, have been starving.“Basically, the birds are not eating anything,” says Bob Dusek, a wildlife biologist at the National Wildlife Health Center. Necropsies from previous years show more than 80 percent of examined seabirds died of emaciation or starvation, and initial results this summer point to the same in most locations.

NOAA Fisheries also declared “unusual mortality events” for both gray whales and sea lions this year after more than 120 gray whales washed up along the west coast of North America, including Alaskan shores. Though necropsies have not yet been finalized, many displayed signs of emaciation.And from June 2018 to September this year, there have been 282 dead seals recorded, nearly five times the average reported strandings.

The goal, now, is figuring out the cause of these widespread starvations. “The fact that all these birds are washing up starved basically tells us that something is off-kilter,” Burgess says. “There are a lot of researchers looking at other pieces of the ecosystem, and the goal is to get these people together to look at how it all fits together.”

Dusek, for example, has been investigating seabird carcasses for disease and toxic exposure. In June, a localized die-off of breeding Arctic Terns in southeast Alaska was linked to saxitoxin exposure, which can cause paralysis and usually occurs through consuming contaminated shellfish.But so far his results from years of analysis point away from sickness being an overarching cause.

Warmer ocean temperatures off the Alaskan coast seem to be the smoking gun. In 2014, a marine heat wave nicknamed “the blob” formed in the Gulf of Alaska and lasted through 2016, and its sustained presence aligned with the first die-off years.After it dissipated, however, the die-offs did not stop, and waters in the Bering Sea, north of the Gulf of Alaska, did not cool. Then, this year, NOAA reported another marine heatwave has formed in the same region as of June.

According to a recent United Nations ocean and climate report, marine heat waves have doubled in frequency since the 1980s and are increasing in intensity. These short-term spikes in temperature can disrupt the base of the ocean’s food web. Warmer water holds less dissolved oxygen, and the plankton and tiny crustaceans that grow there are less nutritious than those in colder water. This means migrating species like seabirds, for example, may arrive in places they usually forage and find their fish prey missing. “Species come to the Bering Sea from all over the world because of the high productivity in its waters, but now the fridge is empty,” says Max Goldman, a conservation biologist at Audubon Alaska.

Even without the heat waves, long-term climate change has already disrupted the marine food web, as oceans absorb nearly all of the excess heat from the atmosphere. Arctic sea ice has also melted by nearly 13 percent per decade since the late 1970s, limiting the growth of ice-clinging algae, another important food source at the base of the marine food web.

The current marine heat wave does not extend as deep as the blob of years past, so it may not last as long, says Andrew Leising, a research scientist at NOAA’s Southwest Fisheries Science Center.But both events “really, really stick out,” he says, compared to the historical record. “They are huge in terms of space they cover and super intense in how much warmer they are.”

Although this year’s die-offs align with the timing of the latest marine heat wave, it’s too early to tell how they’re connected, says COASST director Julia Parrish. The widespread deaths tallied this year could also be a side effect of the growing awareness and participation in the seabird die-off tracking effort, she says.

Another question is why so many Short-tailed Shearwaters have recently been affected, when previously the victims were mostly birds in the alcid family, including Common Murres, Tufted Puffins, and Cassin’s Auklets.

Short-tailed Shearwaters exclusively breed on islands off Australia, and by late April migrate north to the Bering Sea or even the Arctic Ocean. During this 11,000-mile-long journey, the birds need plenty of food to survive and can dive to depths of 230 feetin pursuit of small fish and crustaceans.The species’ carcasses were first reported in Bristol Bay in late June, and then in the Bering and Chukchi Seas by mid-August, Kuletz says, suggesting that birds struggled to find food as they entered the northern Pacific Ocean; the situation didn’t improve as they pushed northward. The washed-up carcasses on the coasts are merely a hint of the entire magnitude of deaths. As seabirds struggled on in the open ocean with empty stomachs, it is likely that 10 times the amount of collected bodies died at sea as a result of the lack of energy and nutrition.

Kuletz also received surprising reports in August of live shearwaters observed in large numbers close to the Gulf of Alaska shore, including Kodiak Island, when usually the species stays offshore and farther to the north. “These are birds that should not even be there,” she says. “They didn’t make it into the Bering Sea, and are hanging out in the bays of the Kodiak and dying there.”

Alaska’s rural communities, also part of the region’s food web, are feeling the effects of the ecosystem shifts.The Aleut Community of St. Paul Island, in the Bering Sea, depends on the eggs of Common and Thick-billed Murres as a source of protein, but in recent years they have virtually disappeared. Red-legged Kittiwakes, which the Aleuts prepare as stew, have also been declining for years as the birds struggle to nest and find food. “Folks are so worried about that population,”says Lauren Divine, the community’s director of ecosystem conservation.”They are not nesting, they’re not finding food, we’re seeing them nest in fewer numbers and later in the year.” Additionally, halibut and fur seals are other sources of protein that have become harder to access, she says.

As temperatures rise and sea ice melts at unprecedented rates, along with added stress of marine heat waves, the ecosystems impacts are becoming more erratic. “When you have these animals traveling thousands and thousands of miles every year, it’s because they’ve developed a faithfulness to this area,” Goldman says. “Now those resources are not as predictable anymore, so you see these anomalous events become the norm.”

Although mass die-offs are becoming anticipated events, it’s harder to say what the next victims will be or when and where the next wave will hit. “Every year becomes a little more unpredictable for us,” Divine says. “Every year you just hold your breath and wait for something bad to happen in Alaska.”

This article was first published by Audubon 11 October 2019.