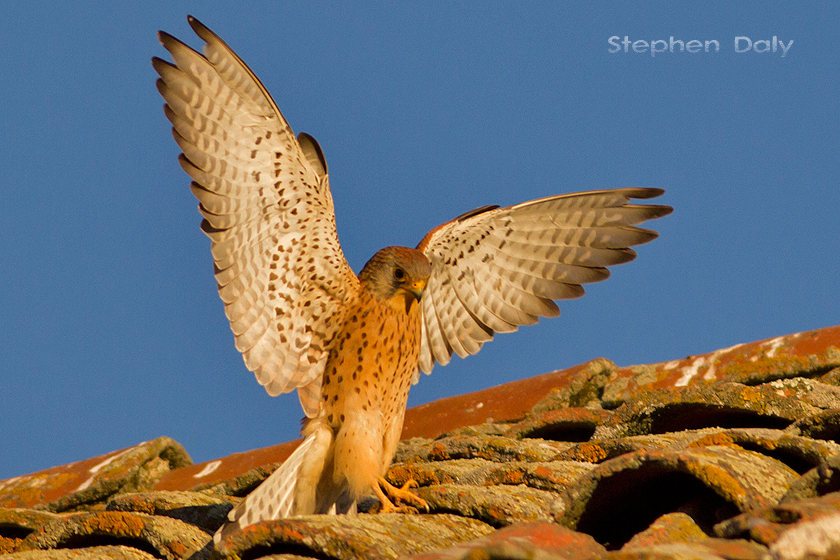 It’s been a busy week for early breeding birds both in the countryside and up in the white villages that dot the Andalucian countryside and are perched on ancient defensive sites. Our Lesser Kestrels have been back for a few weeks and the brighter weather obviously helped them to get into the mood once again for their breeding season. The old town of Vejer is one of my local sites for these striking colonial falcons that nest in crevices and pantile spaces as well as in drainage pipes on the steep sided walls close to the top of this white village.

Males have been displaying as well as guarding old nest sites should any younger bird take a look at a potential nest site. Males often clean out old moss and germinating plants around the entrance to nest sites and carry clumps high into the air calling to their mates that they are spring cleaning – take note men!

Most of the displaying takes place in the mornings and late afternoon. During the breeding period when hungry chicks are in need of a plentiful supply of food the kestrels are in and out of their nests flying from the town down to the surrounding countryside gathering crickets and grasshoppers for their hungry broods and of course photo opportunities are excellent during this time.

Lesser Kestrels are migrant birds but we do have some that stay with us during the winter months rather than cross to Morocco and beyond. These falcons are essentially southern European or Mediterranean species and the bulk of them spend winter in Africa. During our tour to Senegal in march we saw hundreds of wintering Lesser Kestrels that came in to roost close to masses of Scissor-tailed Kites. These kestrels would be breeding birds from the western side of the Med as well as birds that breed in central Spain and Portugal. There are also colonies in southern France and of course all along the north African coast from Morocco to Tunisia.

Just a note: If you are thinking of taking photos during the breeding season please try not to get too close to any birds nest sites and even watch for signs that your presence isn’t causing any stress to the birds. Most of these shots were taken from a high vantage point where displaying birds were coming in close.