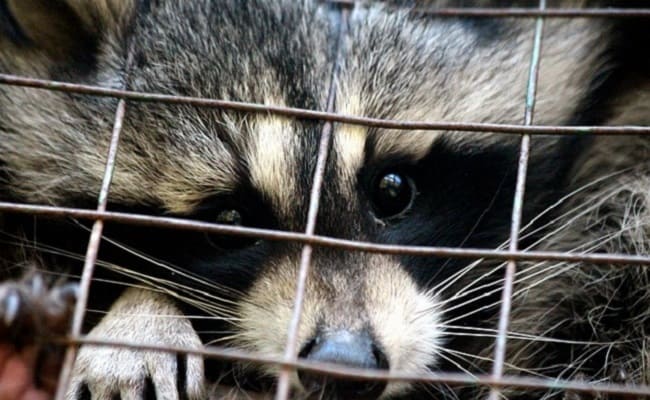 After two raccoons killed the chickens Dewie Brewton’s agricultural science class had been raising at Forest High School in Ocala, Florida, the teacher trapped them in wire cages.

Instead of releasing the creatures into the wild or even turning them over to animal control to be humanely euthanized, Brewton filled a trash can with water and forced his students to drown each raccoon during class.

When the raccoons frantically tried to come up for air, the students held them down with metal rods and sprayed their faces with water hoses, the mother of a student who took a disturbing video of the killings told WKMG.

The students also killed an opossum Brewton had caught “just for sport” according to the mother, who didn’t want to be identified. She said her son came home in tears.

As news spread about this horrifying incident, Brewton was suspended with pay. Marion County Public Schools Superintendent Heidi Maier said the school district was appalled and she intended to fire him. “Marion County’s education standards – in fact, Florida’s education standards — do not include activities for the destruction of live animals, nuisance or not,” the school district said in a statement.

But before he could be fired, Brewton turned in his resignation. And because he resigned, the Marion County School District is no longer investigating the drownings. Fortunately, the Florida Fish and Wildlife Conservation Commission (FWC) is continuing to do so.

According to FWC regulations, nuisance wildlife can be caught using live traps, but the animals “must be released legally or euthanized humanely within 24 hours of capture.”

There is absolutely nothing humane about having students drown trapped wildlife. The FWC will turn over the findings of its investigation to the state attorney’s office, which will determine whether animal cruelty charges are appropriate. This decision should be a no-brainer.

This is the second case of terrible animal cruelty involving a teacher this year. In March, a junior high school teacher in Idaho fed a puppy to a snapping turtle after school as several students watched. That teacher, Robert Crosland, was placed on administrative leave. The Idaho Attorney General’s Office has taken over the case and will decide whether Crosland should be charged with criminal animal cruelty.

It’s pretty shocking that many students and parents continue to support Crosland, arguing that the heinous thing he did taught students the “circle of life.” Yet there is nothing natural about a snapping turtle eating a puppy. Not only did the puppy die, but the snapping turtle had to be euthanized. What kind of lesson is that?

Similarly, former students of Brewton are supporting him. “We would like to say that we are 100% behind our advisor and everything he does for our children/students,” the Forest High School FFA Alumni group stated on Facebook. “The media is going to make this situation escalate to lengths that are unnecessary and we must stand together and focus on the facts.”

The facts are that three animals were cruelly killed– and it’s also a disturbing fact that the students didn’t refuse to drown them. If not for one caring student who recorded the drownings, the incident might never have even been reported.

Hopefully the agricultural science teacher who replaces Brewton will teach these students the importance of treating animals humanely.