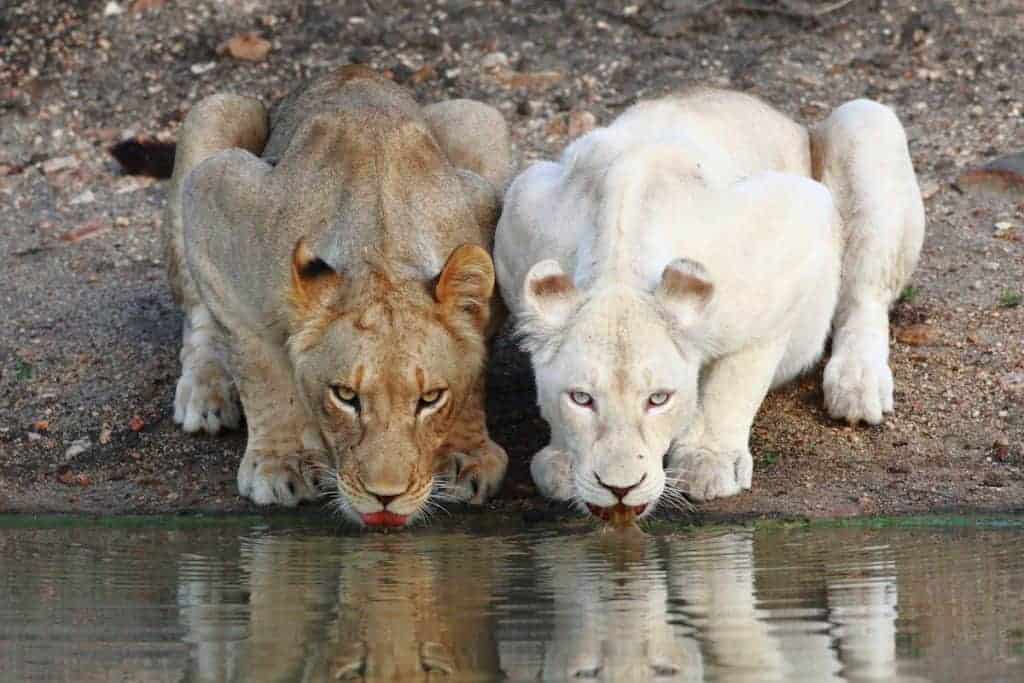 The news about African lions is usually dire these days, as the species dwindles across its range. But Thiessen K. Musaah from Nakuru, Kenya, gave us a welcome break with his question about coat color.

A known genetic mutation can create what’s known as a “white lion,” which is technically lighter brown, not truly white, says Leslie Lyons, a feline geneticist at the University of Missouri.

Though some might think these lions are albino, they’re not—true albinos are unable to produce any kind of pigment, hence their white coloration and pink eyes: Blood vessels normally masked by eye color show through.

The gene is “like blue eyes in a population of Caucasians. A few people have them, but most don’t,” adds Craig Packer, director of the Lion Research Center at the University of Minnesota and a National Geographic Society grantee.

But this white gene may put lions at a disadvantage—for instance, the predators may look more conspicuous as they sneak up on prey, says Boone Smith, an independent big cat researcher based in Idaho.

So over time, if these white lions are not able to successfully hunt, “the white genome simply fades out,” he says.

But that doesn’t mean they’ll never turn up again.

“Just because a trait is not visible does not mean it is not in the genes,” Smith says. If a male and female carrying the same recessive gene mate, that unusual coloration may show up in a cub—though it’s quite rare.

Lyons notes that recessive traits can become more prevalent in areas where inbreeding occurs, such as Tanzania’s Ngorongoro Crater.

Big cats in the crater, which is nearly 2,000 feet deep and about 116 square miles wide, are isolated from most other lions and have some health issues, such as abnormal sperm, Packer says.

While we’re on the subject of lion colors, manes can also vary in hue from light brown to black.

Though mane color can also be genetic, environmental factors also play a role.

A Riveting Encounter with a Rare Black-Maned Lion

who led a 2002 study on mane coloration.

Those dark manes make the males hotter in more ways than one: Females show a strong preference for longer, darker manes, possibly because it’s a sign of higher testosterone and better health.

But don’t think manes are only for males: Though uncommon, maned lionesses have been regularly sighted in the Mombo area of Botswana’s Okavango Delta.