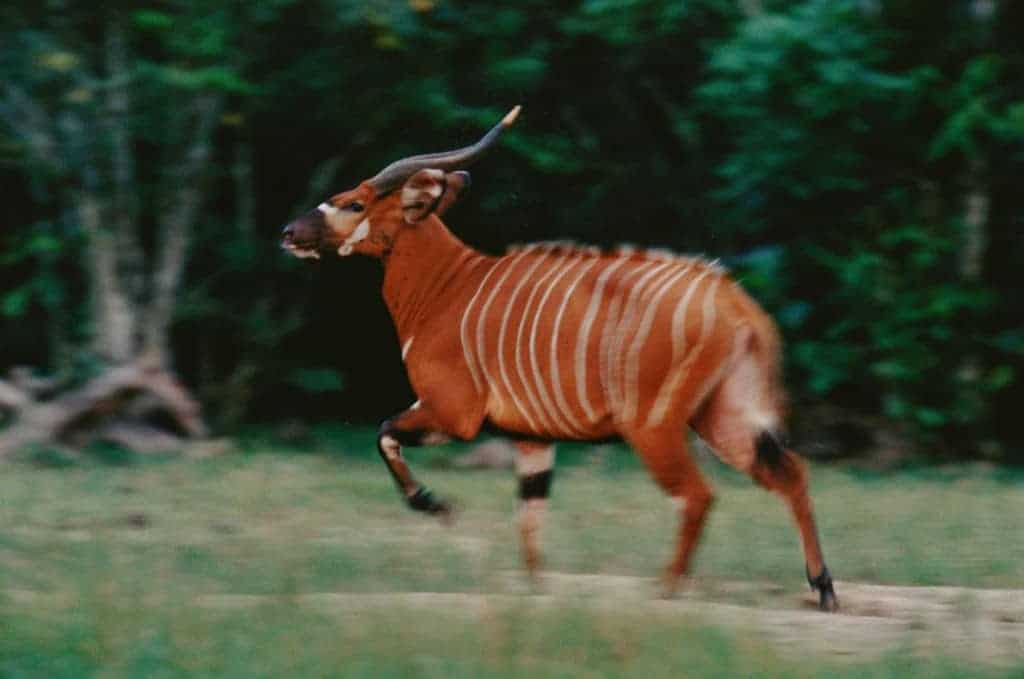 On a cold morning in late February, Chip Wagner stalked an African bongo, an endangered antelope with a striking striped coat. Only Wagner wasn’t in Africa; he was on a hilly game ranch in South Texas. And he wasn’t using his usual bow, but a dart gun, which he had never shot before.

“It’s like trying to hit an animal with a blow gun—that’s how slow that dart goes out,” says Wagner, a Fort Worth businessman who bid $23,000 in an online auction for the opportunity to take part in the world’s first “catch-and-release” hunt of a bongo.

All proceeds from the hunt are earmarked for research and for conservation efforts in Africa, says the hunt’s organizer, Bisbee’s Fish and Wildlife Conservation Fund of Frisco, Texas.

The hunt took place at an exotic game park in the Hill Country called Morani River Ranch, which is home to about twenty bongos, as well as about 70 other types of exotic animals that can be hunted for fees ranging from $5,000 for a zebra to $12,000 for a wildebeest. If supporters have their way, such dart hunts will spread to other areas.

Dressed in full camouflage gear, Wagner, a guide, and a photo team stalked bongos for hours. The first time Wagner got his sights on the male bongo previously selected for the hunt, he shot too high. But by the afternoon, he found it again and hit it from 48 yards (44 meters).

“He ran for about five minutes, then got wobbly legs and went down,” says Wagner.

“There was nothing canned about this. This was a difficult hunt,” Wagner adds. “They’re wild animals and you don’t know what they’re going to do.” (Learn more about the controversy around “canned hunting.”)

As soon as the bongo was unconscious, Wagner posed for photos. Then, a local vet took a blood sample and administered worm-prevention treatment and vaccinations.

“I got a bigger thrill out of it [than traditional hunting] because the animal got up and lived for another day,” says Wagner.

Bisbee conservation fund staff came up with the idea for the hunt to raise money in a way “that was outside of the box,” says founder Wayne Bisbee, who launched the fund in 2012 as a nonprofit offshoot of his sportfishing business.

“It worked out great, and now we are getting a lot of calls from people asking when we are doing the next one,” says Bisbee, who hopes the practice spreads across the state and beyond.

Rhino Green Hunt – In South Africa, big game hunters once paid big bucks to shoot rhinos. The rhinos weren’t killed—the hunts were part of a conservation effort. These hunts have now fallen out of favor in Africa.

Since a catch-and-release hunt doesn’t kill an animal, it could help serve as an alternative to traditional trophy hunts, which are increasingly coming under fire from critics, Bisbee acknowledged. It also may attract non-hunters to get involved in conservation, says Bisbee, because “people like to try new things.”

But not everyone agrees that’s a good idea. Kati Loeffler, a Massachusetts-based veterinarian and advisor to the International Fund for Animal Welfare, says Bisbee’s plan for catch-and-release hunting “is not legitimate” for conservation. Such hunts “continue the mindset that wild animals are here just for human entertainment,” says Loeffler.

Green hunters argue that they can also help scientists, by darting animals that can then be studied or given medical treatments. The bongo selected for the Texas hunt needed routine medical testing, for instance, so it would have been sedated anyway. Bisbee says his team worked closely with the local vet, who specializes in exotic animals, to minimize risks.

But using anesthesia in darts can lead to injury or even death in animals, Loeffler says, especially in bush settings without easy access to emergency equipment like oxygen tanks.

What’s more, she argues that introducing the paying public to the process of administering veterinary care could add unnecessary risk and complexity, possibly violates industry protocols, and puts undue stress on animals by turning it into a game at their expense.

Wagner says the bongo he hunted “didn’t suffer” and adds, “we saw him later that afternoon walking on the ranch as if nothing had happened.”

“Green hunts” or “darting safaris” were briefly popular in South Africa and Namibia, but fell out of favor around 2011, says Cathy Dean, director of the London-based charity Save the Rhino International. Authorities were concerned that darted rhinos could injure themselves by falling off cliffs or drowning in ponds, “or simply by overheating when running on a hot day.” Some vets were also caught selling tranquilizers intended for the hunts on the black market.

“There needs to be a better reason for darting a rhino than that a rich tourist wants a thrill,” says Dean.

Learn about another endangered antelope species.

Wagner says he is proud to help support conservation of an endangered species. Bisbee calls hunters “necessary for conservation,” thanks to the funds they raise and their political influence.

But a rising tide of anti-hunting sentiment has been building online. In that camp, Loeffler says, “We don’t have to hurt animals to raise money for conservation.”

For his part, Bisbee says he’s already working on setting up additional catch-and-release hunts of animals that need veterinary care, and he hopes the trend will spread.

Perhaps a hint of what is to come, Wagner says he would take part in another one “in a sec.” He’s even considering catch-and-release for his own game ranch in western Texas.

This article was first published by National Geographic on 17 May 2015.