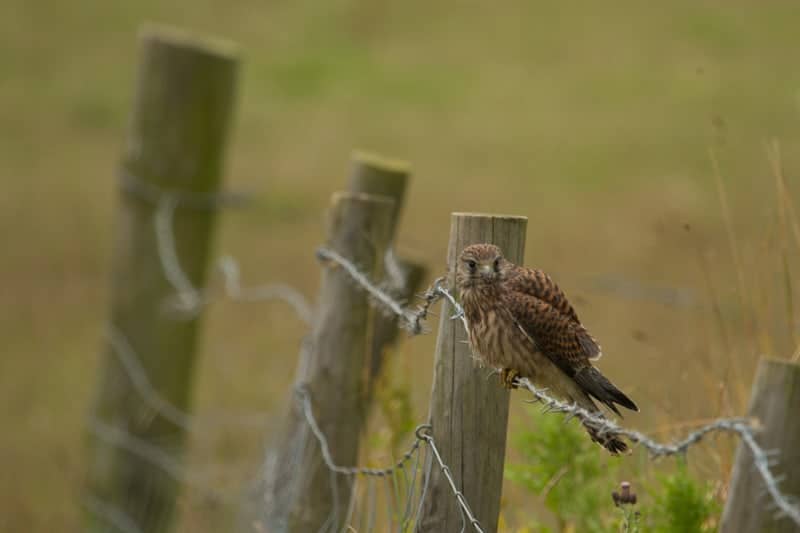 “I caught this morning morning’s minion, kingdom of daylight’s dauphin, dapple-dawn-drawn Falcon, in his riding of the rolling level underneath him steady air, and striding high there, how he rung upon the rein of a wimpling wing. “

The year of 1877 saw the placing of pen to paper and the creation of “the Windhover” by Gerard Manley Hopkins. This highly commended poem relates to the common kestrel (Falco tinnunculus); a bird with which we are all familiar. Persecution was rife in those times; one estate in Scotland listed all “vermin” killed in a period of three years; 462 Kestrels were recorded! That was just one estate! But even then, during times of relentless persecution and killing of raptors, fox, badger, even otter and wildcat, there were some who could appreciate the charm of the kestrel, enough to write the species into literature and history.

Thankfully in more recent times the kestrel is one raptor species that is relatively safe from the merciless poisoning and shooting that to this day continues, but how safe is it in general? In the UK numbers of this small falcon recovered following the years of pesticide poisoning by DDT and others like Dieldrin and they were our most common bird of prey. Recently however they have been ousted from this position by both the Sparrowhawk (Accipiter nisus) and the Common Buzzard (Buteo Buteo). Estimates vary for the breeding pairs of Kestrels in the UK, some papers quoting up to 50,000 pairs but the more generally accepted figure is closer to 35,000. The species is now Amber listed for the UK, reflecting 25-50% declines, although recent breeding bird surveys show a much more rapid decline across Scotland; 67%. Across Europe the species is also demonstrating declines.

So why are we losing the bird that makes long motorway drives that little bit better as it hovers effortlessly, all the while endless lorries and cars thunder on by? Good question. Most people who are aware of the problem seem inclined to blame a certain species, like the crow or the magpie. Some feel the rejuvenation of the buzzard population is having a negative impact. But what about us as humans and all that comes with us; our regimental fields of crops, cutting and mowing of roadside verges, and of course our love for pesticides and insecticides. Our continuous intensification of agriculture must play a part as it does with other iconic rural species like the Skylark (Alauda arvensis), Lapwing (Vanellus vanellus) and the Brown Hare (Lepus europae). We’re now hearing more on the subject of neonicotinoids that are being used across the world in farming without understanding the possible repercussions. These chemicals are likely to be impacting upon our honey bees, but also may be leaching out into the ground soils and into the waterways; we do not yet know the impacts upon terrestrial mammals and birds. Reminiscent of Silent Spring and the lessons taught by Rachel Carson? It was obviously not a lesson learnt.

Most people I have spoken to about the Kestrel are seemingly unaware of its disappearance, but then they take a minute, maybe to think; how long ago did I see that little male hovering? Or maybe to remember a local pair that aren’t around anymore. After a minute most people are shocked it had never occurred to them, and agree wholeheartedly that they don’t see the windhover much anymore. I myself with my home in Northumberland have seen changes over a period of two or three years.

Luckily I am one of a few conservationists who have a real affinity for the Kestrel, with Chris Packham standing at the forefront of Kestrel conservation. The well known wildlife TV presenter is also the face of The Hawk Conservancy Trust, a charity running a Raptor Nest Box Scheme – the Kestrel is one of four species this scheme targets and Kestrels readily take up nest boxes if one is offered. Nest sites are often one main factor in a bird species declining, so this may really help and simultaneously offer a means of research. Again, if you have spotted a Kestrel you can log your sighting online to help build up an image of where the species is doing well and those areas it is missing from. We’re still a long way off from making a real difference though.

This little, iconic falcon has to be up there as one of my favourite birds with its amazing ability to see ultraviolet light and use this to hunt so effectively. The males with their slate grey cap and tail certainly look the part to ride along with a crowned prince as the windhover does in the immortal words of Manley Hopkins. Hopefully we can begin to completely understand the reasons behind the dwindling Kestrel and work to reverse them before it becomes a rare sight in our UK countryside.

Thank you for reading 🙂