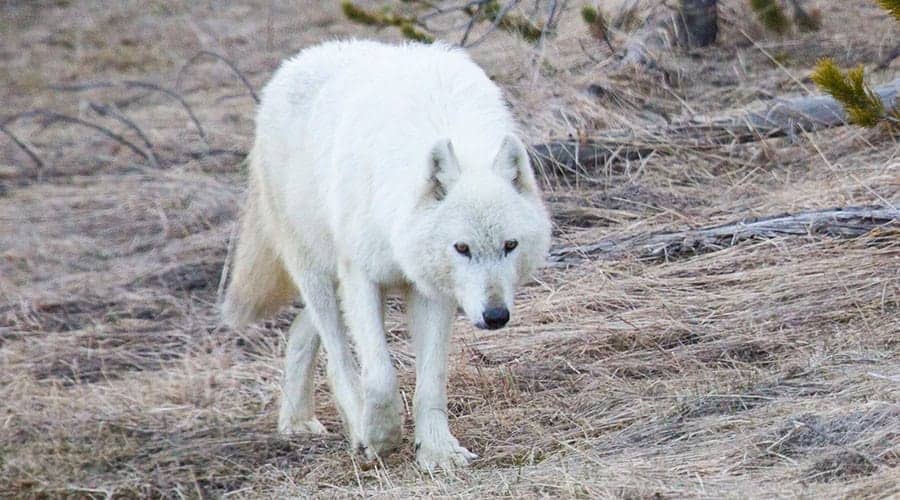 For years, the wolf known as “White Lady” delighted visitors who were lucky enough to catch a glimpse of her when they visited Yellowstone National Park.

At 12 years old, the alpha female of the Canyon Pack had lived twice as long as other wolves in the park. Within nine years, with the same alpha male, White Lady gave birth to over 20 pups, 14 of which lived to adulthood. She would roam a wide area of the park, from Hayden Valley to the Firehole River area to the northern portion of the park.

White Lady was one of only three white wolves in Yellowstone. “She was one of the most coveted wolves to see,” Douglas Smith, the park’s wolf biologist, told the New York Times.

But White Lady’s charmed life came to an end last month. On April 11, hikers found her, mortally wounded, on the north side of Yellowstone near Gardiner, Mont.

White Lady had to be euthanized due to the severity of her wound, which a necropsy by the U.S. Fish and Wildlife Service later discovered was from a rifle bullet. Hunting wolves in Yellowstone is illegal — at least for now — so park officials are treating her death as a criminal act.

Yellowstone National Park offered a reward of $5,000 for information leading to the conviction of White Lady’s killer. The reward money was matched by the Montana-based nonprofit Wolves of the Rockies. Thanks to donations, as of May 16, the reward is over $10,800.

Wolf hunting was already legal in two states that border Yellowstone– Idaho and, to a limited extent, Montana — and in March it also became legal in Wyoming when a federal appeals court ruling stripped wolves of their protections in the state, allowing them to be considered as vermin and shot on sight.

After being hunted to near extinction in the continental United States, wolves now live on just 10 percent of their previous range. From 1995 to 1997, 41 wolves from Canada and Montana were released in Yellowstone National Park, according to the park’s website, which notes, “As expected, wolves from the growing population dispersed to establish territories outside the park where they are less protected from human-caused mortalities.”

As of January 2016, at least 98 wolves in 10 packs lived primarily inside the park, while 528 wolves lived within the Greater Yellowstone Ecosystem.

Who Would Kill White Lady?

Park officials don’t know what motivated someone to kill White Lady, but Marc Cooke, president of Wolves of the Rockies, “suspects opponents of wolves in Yellowstone were responsible,” the Associated Press reports.

“Many hunting outfitters and ranchers have been unhappy about wolves since their reintroduction to the park more than 20 years ago,” according to the AP. “The wolves prey on big-game animals and sometimes cattle.”

This wasn’t the first time a well-known and beloved Yellowstone wolf has been killed by a hunter. The park’s most famous grey wolf, known as 832F, was shot and killed in December 2012 just outside the Montana boundary. Because it happened outside the park, her murder was not considered a criminal act.

Anyone with information about White Lady’s killer(s) is asked to either call the National Park Service Investigative Services Branch (ISB) tip line at 888-653-0009, send a text to 202-379-4761, submit a tip online, send an email to [email protected], or leave a message on Facebook or Twitter.

Tweeted. This senseless destruction happens when hunting is legal – there is NO controls!

The offerers know the reward will never be paid bc will never be a conviction. First defense, the SOB didn’t even kill (have the mercy to finish off) & only wounded. If F&W has the rifle bullet from necropsy, are they going to do the investigative forensics to prove came from suspected shooters gun, are they that interested?

These animals had no say in if they wanted to be kidnaped (brutally trapped & transported in freezing holds of small planes ) by U.S. F&W to be dumped in Yellowstone in winter. It was known then that as they dispersed, expanded their range, they’d be killed by sport hunters & livestock ranchers who’d objected from beginning. But everybody makes money now, states w/ their license & permit fees off the blood of wolves & the self-serving wildlife defender orgs. who supported F&W & now get to solicit donations to ‘save the wolves.’

how terribly tragic and so hope they find the person responsible. I do not understand why wolves are hunted or any animal for that matter and hunters/cattle owners and more have way too much control……I wish this hunting could be stopped here and around the world, as man is destroying so much.

God should have stopped when he was done creating animals.

the howl
There was a time the world was ours
No big tall buildings, no noisy cars
No people with guns, shooting at
Everything they see
When we could howl
As a family
When we could roam our world
At will
Not worrying about if we would
Be killed
The moon our beacon, the sun our friend
We did not think this would ever end…
the wolves

I am ready,willing and able to help enact the required payback permanent payback to any POS animal murderer.I am a firm believer in an eye for an eye!

What tragic news! How appalling is man’s ignorant cruelty and need to kill such beautiful creatures as the wolf! How totally low and what a total tragedy for the pack, the breeding male and for her lines. The fact that she was pregnant as well is a further blow. How can we ever apologise to animals on what we inflict upon them?

Why are some humans so evil. hate any cruelty to animals wild or not.

Once again humans have crossed the line of good and evil.