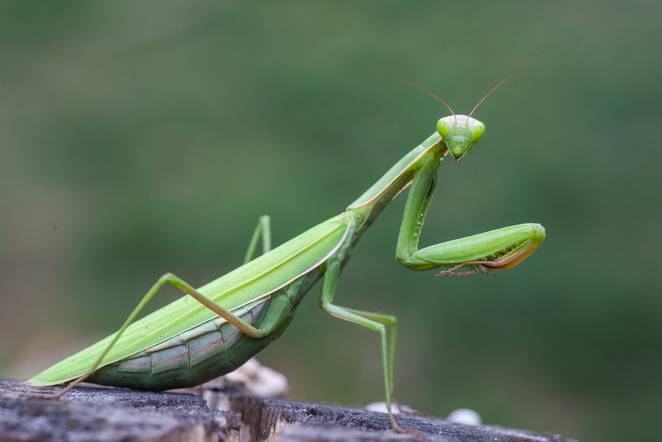 From extreme camouflage to sexual cannibalism, these pious-looking carnivores are as exquisite as they are fearsome.

Named for their prominent front legs that fold together in a supine gesture suggesting an act of devotion, the praying mantis comes off as supine and soulful.

You might think of them as docile things, moving about slowly, nibbling on orchids … but oh how looks deceive.

The truth is, Mantis religiosa, is an ambush predator; a carnivore with martial arts moves and a taste for live flesh.

As one scientists said in reference to mantises learning to stalk hummingbird feeders for meals, ““We’re lucky praying mantises aren’t our size.”

But more than that, they are fascinating creatures that have mastered their place in the natural world. Case in point? Consider the following.

1. They have great vision

Given the look of those peepers, is it any surprise that they have stereo vision? They can see in 3-D and their eyes each have a fovea – a concentrated area that allows them to focus and track with acuity.

Aside from those two large compound eyes, they also have three spare simple eyes located in between.

To the surprise of scientists filming them, mantises have been found to jump with extreme precision, contorting their body midair to land on a precarious and specific target. Watch the video below; so athletic, right?

3. They make swift work of their prey

Praying mantis wait to ambush or patiently stalk their prey; but once they’re ready to strike, they do so with lightning speed, attacking with those big front legs so quickly that it’s hard to see with naked eye.

In addition, they have spikes on their legs to skewer and pin the victims into place.

4. They are masters of disguise

Praying mantises are supremely gifted when it comes to camouflage. They come in the form of leaves and sticks and branches, like many insects, but also take it a bit further.

Some mantises molt at the end of a dry season to become black, conveniently aligning themselves with the brush fires that leave a blackened landscape.

The flower mantises are crazy; some wildly ornate, others looking so convincing that unsuspecting insects come to collect nectar from them … and become dinner in the meantime.

5. The only eat live food

Which makes them helpful in pest control as they sup on all kinds of insects, including crickets and grasshoppers.

6. They disrupt the food chain

But they don’t stop at eating insects. As mentioned above, they commonly target hummingbirds!

Not to mention warblers, sunbirds, honeyeaters, flycatchers, vireos and European robins, in addition to frogs and lizards.

And then there’s this nugget from the New York Times on the topic: “In two reported cases, females feasted on birds while copulating with males.”

Well, in their taste in body parts, that is; when they capture birds, they go straight for the brains.

8. They do have predators

Even though they stalk hummingbirds and are masterful hunters, they are also the hunted.

Their predators include frogs, lizards, and birds, and spiders.

9. They do battle with bats

Praying mantises are also preyed upon by bats, but they are no easy victim.

They can detect the bats’ echolocation sounds and when they are approached, they dive to the ground, often executing spirals and loops on their way; if caught, they try to slash their way to freedom by use of their big spiky front legs.

10. They were thought to have special powers

Well, obviously they have special powers, but early civilizations, including Ancient Greece, Ancient Egypt, and Assyria considered them to have supernatural powers.

(The mantis part of the name comes from the Greek for prophet.)

Is it any wonder? They are often characterized as a femme fatale as well; see next point.

11. They engage in risky sex

Black widows shouldn’t get all fun, praying mantises dabble in the femme fatale arts as well.

Mama mantises lay an especially large bunch of eggs, which means they need a lot of food.

Which means, unfortunately for their partners, they may literally bite off their head and devour them.

And they may even do this during the course of their three-hour mating session.

A little bit of coital cannibalism may also add to the success of the copulation.

how cool is this critter!

It was created and programed.How wonderful