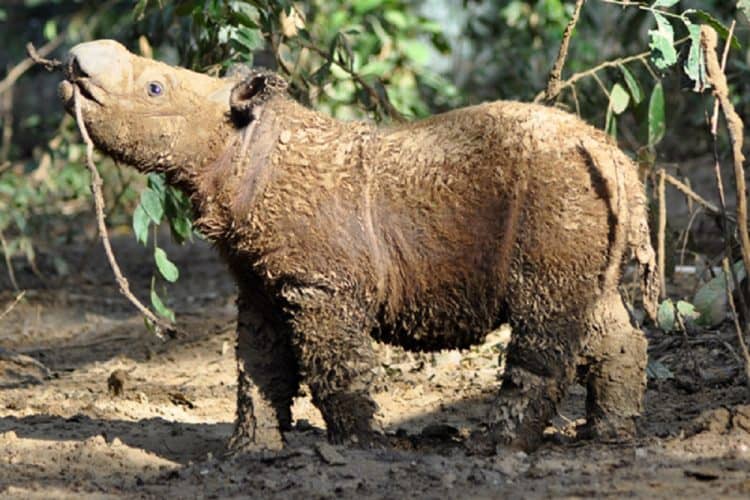 Indonesia’s environment and forestry ministry will convert a former gold mining site into a sanctuary for the Sumatran rhinoceros in East Kalimantan province, after conservationists identified 15 of the critically endangered creatures in the area.

The Sumatran rhino (Dicerorhinus sumatrensis) was until recently believed to be extinct in Kalimantan. Then in 2013, scientists on an orangutan search discovered rhino footprints in the Kelian Protected Forest in West Kutai district.

Since then, a team of government officials, academics and NGO workers have used video cameras installed in the trees to confirm the existence of 15 Sumatran rhinos in at least two habitat pockets.The findings are backed by villagers’ testimonies that their ancestors used to hunt for rhinos in the area and mentioned the species in their rituals.

“This is good news because we suspected [Sumatran rhinos] were already extinct in Kalimantan but we found 15 rhinos,” said Tachrir Fathoni, the ministry’s head of ecosystem conservation. “If we find 10 more, the species can be saved. We need to move fast because their existence is under constant threat.”

The ministry estimates that less than 100 of the small, hairy creatures remain in the wild. Last year, the rhino was declared extinct in Malaysia’s Sabah state, also on the island of Borneo. It still roams in parts of Sumatra.

The sanctuary will be built on 200 hectares of land that used to be managed by PT Kelian Equatorial Mining (KEM), a subsidiary of the British-Australian mining giant Rio Tinto. In 2004, KEM closed the Kelian mine after exhausting gold supplies there. The area was turned into the 4,561-hectare Kelian Protected Forest in 2013.

Widodo Ramono, executive director of the Indonesia Rhino Foundation (YABI), said KEM had “done a good job complying with regulations” requiring it to rehabilitate the former mine site. (Many companies ignore the rules.)

YABI has asked the forestry ministry to designate the area a wildlife reserve, similar to the Sumatran Rhino Sanctuary in Lampung province on the island of Sumatra, which is home to six captive rhinos.

The ministry hopes to start building the Kelian sanctuary this year; it will cost at least 30 billion rupiah ($2.3 million) according to Fathoni.

In the meantime, Ramono said, the rhinos in one of the habitat pockets must be immediately translocated to one of the others because of the proximity of agribusiness and mining operations, which are near-ubiquitous in West Kutai.

Conservationists hope to trap the rhinos in pits. “If we drug them, we fear they might instead fall in swamps or rivers and drown,” Ramono explained. “It would be dangerous for them.

The Sumatran rhino is a solitary, shy species. It tends to take a long time to breed. Conservationists believe most of the Kelian population is female, said Nyoman Iswarayoga, WWF-Indonesia’s communication director.

“We identified at least one young Sumatran rhino, so there’s a potential of male existence [in the habitat pockets] and that they were able to breed [in the wild],” he said adding that the numbers were not finalized as they were hoping to locate more rhinos in the areas.

This article was first published by Mongabay.com on 14 Mar 2016.