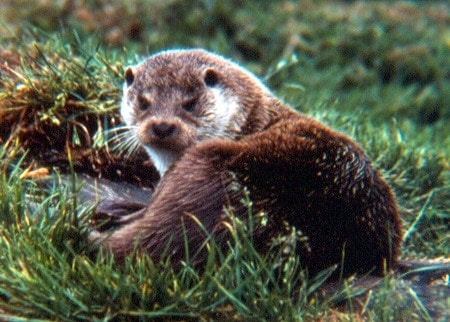 Otters are special animals – not only are they wonderful to watch but they are great indicators to a healthy environment. And yet all over the world they are being exploited for commercial gain and in some places hunted almost to extinction.

Did you know that for every tiger skin found there are at least 10 otter skins and one haul in Lhasa, Tibet, found 778 otter skins.

There are 13 species of otter and they are all listed in the IUCN Red List – 12 of them are declining drastically in number. Only the North American river otter is described as “stable” and even this is questionable. Their habitat is being destroyed and fish stocks depleted. And they are being killed on our roads.

The International Otter Survival Fund (IOSF) is launching 2016 as the Year of the Otter to draw attention to the plight of the world’s otters and to raise funds for their conservation. The special appeal aims to raise £65,000 in 2016 – that is £5,000 for each species.

IOSF was set up in 1993 to protect and help the 13 species of otter worldwide, through a combination of compassion and science and IOSF is now at the frontier of otter conservation, particularly in Africa and Asia.

The situation is particularly serious in Asia, where otter populations are in sharp decline, along with their wetland habitats, and one of the main reasons is lack of awareness. This then leads to a lack of available funding for research, education and conservation.

Trafficking in otters for furs, body parts and pets is rarely discussed in Asia, and yet the scale is most alarming and is having a serious effect on populations and local ecosystems. Otters are one of Asia’s most overlooked medium-sized mammals and yet they are at the forefront of the illegal wildlife trade together with tigers and leopards. In some parts of Asia, otters (particularly Asian small-clawed otters) are taken from the wild for the pet trade and many of these are kept in terrible conditions and die. This trade is seriously threatening the survival of otters and in some areas they have become locally extinct.

The trade is closely linked to poverty. In addition to global threats to wildlife (habitat loss, pollution, climate change, etc) otters also face conflict with fishermen as they can take fish and damage nets – expensive losses to a poor family dependent on fishing. If people can earn a substantial amount by selling the animal it is a great incentive, especially as it also removes this competition. It is therefore important for trained people to help resolve conflicts and if necessary encourage other otter-friendly livelihoods.

For any conservation programme to be successful it must be founded on recent sound scientific data obtained by trained professional researchers. Conservation programmes are also far more effective when organised by local people but in Asia and Africa there are very few scientists working on otters and their habitats.

Research alone is not conservation and, apart from finding out where there are populations and what problems otters have, this will do very little to benefit them. Where there are a lot of researchers, there are often not enough conservationists on the ground to help otters.

IOSF has held training workshops across Asia in Cambodia, Bangladesh and Indonesia, which are aimed to train locals in the conservation of otters. By training local people to be able to conserve otters it will help not only the continued existence of the otter but other wildlife as these conservation techniques can benefit all biodiversity. These workshops train students and park rangers from the region in otter field techniques, education, public awareness programmes, law enforcement and general conservation issues. Local government personnel are also invited to attend to encourage better law enforcement and otter protection.

Changes in attitude are hard to “verify” but can be recognised by trained field workers who liaise with local communities. Following the first workshop in Cambodia in 2009, a local fisherman found a hairy-nosed otter in fishing hooks and contacted one of the community workers, instead of selling the pelt for up to US$200 – this clearly demonstrates the start of a change in attitude. Co-operation between local communities and project workers is essential but there have to be trained workers on the ground to facilitate this.

Otter Networks have been formed in Bangladesh, Indonesia, Cambodia, Vietnam, India and Pakistan and these are linked to form the Asian Otter Conservation Network. Each country network co-ordinates research and is able to act quickly should any otter cubs be in need of care. By linking together with other Asian workers they can share experience and education materials and seek help and advice from co-workers.

In China, apart from in more arid provinces, otters used to be widespread but now they are found in only 15 of the 35 divisions and they are rare in 9 of these. In the Changbaishan Mountain Nature Reserve they have declined by 99%. So next year IOSF will venture into China for a training workshop – a first for China. A similar Chinese Otter Network will be formed to create a launchpad of collaboration throughout the country and encourage work within communities and co-operation in conservation and law enforcement.

Prof Padma de Silva, from Sri Lanka is Chair of the Asian Otter Conservation Network, and she said “This is a really exciting project for us and will draw a lot of awareness to the precarious state of otters in China. The Board at Chimelong have been very supportive and are keen to develop a long-lasting education programme on otters in their park. This will lead to more active conservation of otters and their wetland habitats.”

IOSF is also working in Africa. In July 2015 a training workshop was held at the Mweka College of Wildlife Management in Tanzania with participants from ten sub-Saharan countries. Dr Paul Yoxon, IOSF’s Head of Operations, said “So little is known about otters in Africa that a lecturer at the College told us ‘We don’t have otters in Africa’, even though they have four species! The workshop was a great success and we now have an African Otter Network and new information is already coming in.”

IOSF wants everyone to get involved spreading the word about the importance of otters and help to raise funds to support projects.

Contact [email protected] for more information and to say how you will be supporting the Year of the Otter – this will go on to the IOSF website and into the monthly e-update.

TOGETHER WE CAN BECOME A VERY LOUD VOICE TO MAKE PEOPLE TAKE NOTICE AND LISTEN.