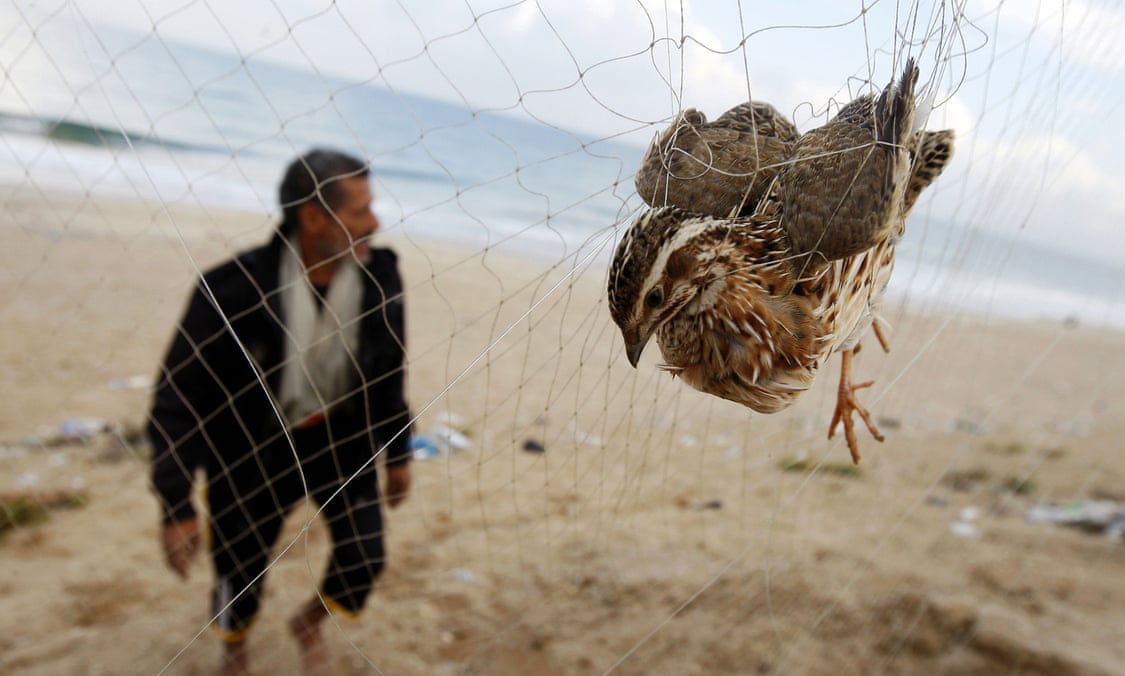 The Egyptians line their beaches with fine two-metre high nets that can stretch for miles across the Nile delta and will catch any bird coming close; the Maltese will cover whole trees in nylon; the Cypriots smear branches in glue to stop birds flying; the Italians will kill nearly anything that flies and the French like to set metal traps for small birds.

But the sheer scale of the cruelty of the illegal wild bird killings around the Mediterranean which was revealed last week has shocked conservationists and bird lovers across Europe.

According to the first study of its kind, which has attempted to put a realistic number on how many birds are killed illegally each year, possibly 25 million chaffinches, thrushes, robins, quails and many other species are being shot, trapped or poisoned as they migrate to and from mainland Europe.

A man walks towards his net where a quail is snared on the beach of Khan Yunis in the southern Gaza, Palestine. Hunters erect hundreds of meters of yellow silk nets along the coastline to hunt migratory birds, mainly quails, which start arriving to the coasts of the Mediterranean in September. Photograph: Said Khatib/AFP/Getty Images

But what has shocked most is that strong laws have been shown not to be working and are being openly flaunted by hunters. Nearly half the 25m killings occur in EU states where the birds directive applies, and many other Mediterranean countries also ban the hunting of songbirds.

British ornithologist and conservationist Bill Oddie this week blamed hunting groups and complicit bureaucrats for what he says is a massive failure of governments and the authorities to act.

“Around half the birds being killed are in countries where strong laws theoretically protect birds,” said Oddie. “The figures are shocking and it’s getting worse. Hunting groups in many countries are stopping the laws being enforced. Many people in the EU probably know or actually are shooters. People in power like killing things.”

According to Oddie, hunters are now going to extreme lengths to trap birds on a much greater scale than just 20 years ago. “In Egypt a 70km stretch of coast was found with continuous 6-7ft high mist nets to catch quails,” he said. “In some countries, like Cyprus, the bird killing is on an industrial scale. We did not know how dangerous it is for birds in Egypt. What is new is that we know now that it’s not just some countries. Even ‘unsafe countries” like Syria and Libya are killing them on a huge scale.”

Lobbying by hunting groups, reluctance by the EU to act and national justifications of tradition and culture have encouraged illegal bird hunting to flourish despite strong laws, says Ann-Laure Brochet, the author of the study.

“These are best estimates, a baseline figure. Figures cannot be entirely accurate because there is no monitoring or checks in some countries. In some places we don’t know what is going on, so we can only estimate the range of killings,” said Brochet who took evidence from hunting organisations, governments and conservation groups to arrive at the estimated number.

The research, which has been accepted for publication later this year in Bird Conservation International journal, suggests that Italy and Egypt are the the most dangerous countries for migratory birds, followed by Syria, Lebanon and Cyprus. In Italy, where about 5.6m birds are killed each year, over 150 species are killed in significant numbers.

According to a report (pdf) which draws on the scientific study, the most dangerous place in the Mediterranean was found to be the Famagusta area of Cyprus where nearly 700,000 birds are killed every year. Many hundreds of thousands are are targeted on or close to the British Dhekelia military base where the Ministry of Defence has agreed to uproot illegally planted trees and shrubs which trappers use for cover and to lure birds.

The chaffinch tops the Mediterranean ‘kill list’ with an estimated 2.9m killed every year, closely followed by blackcap (1.8m), quail (1.6m) and song thrush (1.2m). Numbers of many of the species tgargeted, like the European turtle dove and the song thrush, are already in steep decline, while others like the pallid harrier and the Egyptian vulture, are on the European red list, meaning that any killings can seriously affect numbers.

“We know that there are far fewer birds in Europe than there were 20 years ago, so what is happening now is more serious,” said Brochet.

The paper exposes some of the methods that hunters use to kill birds. These include shooting and catching in nets, the use of birdsong recordings to lure species to traps, and putting glue on branches to prevent birds flying.

“This review shows the gruesome extent to which birds are being killed illegally in the Mediterranean. Populations of some species that were once abundant in Europe are declining, and disappearing altogether,” said BirdLife International chief executive, Patricia Zurita.

The most affected species

The report is published as the European commission seeks to “modernise” Europe’s birds and habitats directives which form the base of nature protection in all 28 member states. The official assessment to decide whether the laws, which were largely drawn up by British bureaucrats, are “fit for purpose” is widely seen by conservation groups as an attempt to weaken them in the face of pressure by governments, hunting groups and developers.

This has sparked outrage. In May, over 100 leading nature organisations wrote in a briefing to the European commission that as a result of this review, British species and landscapes could face the “biggest threat in a generation.” Over 500,000 people, including 100,000 in Britain, have now urged the commission “to maintain and enforce EU nature legislation.”

A recent assessment of European birds showed that nearly one-fifth are considered to be at risk of extinction across the European Union with habitat loss, climate change and increasingly intensive farming being key causes of threat.