Magpies are often maligned as pests, but they’re actually quite interesting birds that are usually overlooked for both their beauty and their intelligence.

1. Magpies Don’t Like Shiny Things — They’re Scared of Them

Magpies have a reputation as thieves out to steal your shiny jewelry or take ornaments from your garden, but new research shows that flashy objects probably repel magpies.

The myth seems to have built up without much science to back it up, but the truth could actually be useful.

Magpies are capable of wrecking crops by digging for grain, berries and other food, so along with other bird-scaring measures, placing shiny materials in fields might deter magpies and keep crops safe from being upturned and trampled.

2. Magpies Will Eat Almost Anything, Including Bird Eggs and Chicks

While their natural diet is quite broad — including insects, small rodents, grain and berries –magpies have been known to steal other birds’ eggs, and even young chicks.

In addition, magpies have adapted rather well to suburban living, so they’ll often eat leftover food scraps. But it’s better to provide them with proper bird food to ensure they don’t eat anything poisonous.

3. Magpies Are Closely Related to Crows, Jays and Ravens

Though they may look quite a bit different at first glance, magpies belong to the bird family Corvidae, a group that includes crows, ravens, rooks, jackdaws and jays, as well as lesser recognized members like treepies, choughs and nutcrackers.

As such, magpies are among the most intelligent family of birds recognized by modern science. Which leads us to our next fact:

4. Magpies Recognize Themselves in Mirrors 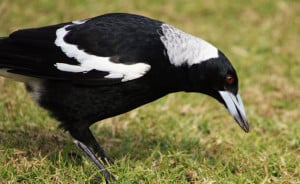 European magpies have demonstrated the remarkable ability to recognize their own reflections in mirrors, something that was once thought to be a defining characteristic belonging only to humans. This might not sound that amazing, but out of countless species tested, only four ape species, bottlenose dolphins and Asian elephants have demonstrated this ability.

Scientists tested the magpies by placing a colored mark on their necks — which did not hurt or cause skin irritation. Then when placed in a cage with several mirrors, the birds were filmed scratching at their necks after looking at their reflections. With all other controls in place, this could only mean that magpies had recognized themselves in the mirrors. And not just that, the birds had differentiated between their normal physical state and their now-marked plumage.

5. What is a Group of Magpies Called?

There are several names given to a group of magpies, but perhaps the most descriptive is “a parliament.” The birds have earned this title from often appearing in large groups in the spring, looking stately and cawing at each other.

A final fascinating fact relates to one of the defining features of a magpie. While they share some similarities with their corvid family, the magpies possess an extremely long tail. In fact, a magpie’s tail is often roughly the same length as its entire body.

Why magpies have such long tails remains up for debate, but it may provide magpies with the ability to make swift turns while in the air. This would allow the birds to evade larger predators and make up for rather average flying abilities.

If you are a magpie lover, why not choose custom magpie pins to decorate your clothes, and bags and show your hobby. At GSJJ, you can find not only custom pins but also many other custom products, such as patches, challenge coins, etc. No matter what animal you like, they can be crafted into corresponding merchandise. Take the animal pins home with you!