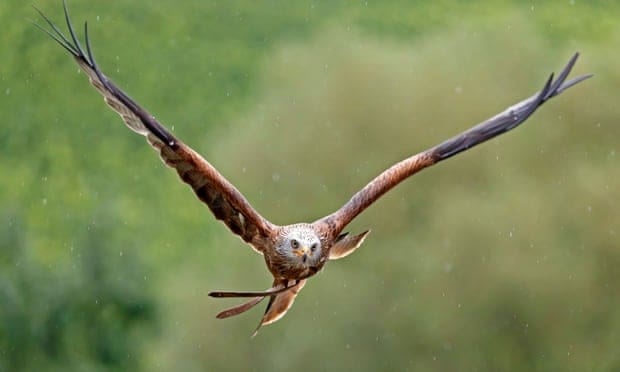 Birds of prey were shot, poisoned, trapped or illegally killed in 87 confirmed incidents in 2018 that led to just one successful conviction, according to the RSPB’s annual Birdcrime report.

This persecution of raptors including peregrines, buzzards, red kites and owls is the tip of the iceberg, with many more birds vanishing in mysterious circumstances, according to data from satellite-tagged birds and other intelligence.

According to the report, 77% of the confirmed incidents took place in England. There were particular hotspots of illegal persecution in the Peak District, North Yorkshire and southern Scotland. Incidents were mostly recorded in upland areas where land is managed for driven grouse shooting.

The RSPB is calling for an independent review of driven grouse shooting in England, alongside the licensing of all grouse moors across the UK, with a mechanism to withdraw licences if the illegal persecution of birds of prey is proved.

Martin Harper, a conservation director at the RSPB, said: “Any industry which includes criminal and environmentally damaging practices needs reform. The driven grouse shooting industry has, despite decades of warnings, failed to put its house in order, most shockingly turning a blind eye to the ongoing illegal persecution of birds of prey. Given we face a climate and ecological emergency, we believe it is time for governments to intervene.”

A petition by the wildlife campaigners Chris Packham, Mark Avery and Ruth Tingay calling for a ban on driven grouse shooting – in which large numbers of wild red grouse are driven towards waiting guns – has received 79,000 signatures.

Hen harriers, a bird of prey almost extinct as a breeding bird in England because of its persecution on grouse moors, have this year enjoyed their best breeding season since monitoring began, with 15 nests in England producing 47 chicks.

A 10-year study using Natural England data recently revealed that 72% of satellite-tagged hen harriers were confirmed or considered very likely to have been illegally killed. It found that hen harriers were 10 times more likely to disappear over grouse moors, where they are considered a threat to red grouse.

Eleven of the English hen harrier nests this year are on land managed for grouse shooting. A new “brood management” scheme allows some chicks to be reared in captivity and released elsewhere to prevent concentrations of the bird on grouse moors.

This article was first published by The Guardian on 29 August 2019.