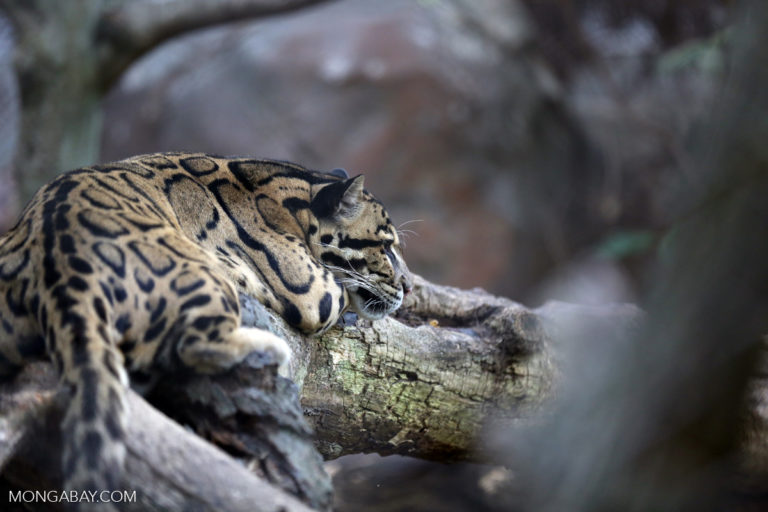 It might sound nihilistic and harsh to describe Vietnam, Laos, and Cambodia (Indochina) as forming a kind of buffer zone against the onslaught of snaring and the defaunation of forests that have engulfed the region, but that may be exactly what these countries represent, and even Thailand is not safe.

The Indochinese tiger is extinct in Cambodia, Laos, and Vietnam. Today its stronghold is in Thailand, with perhaps two dozen more individuals hanging on in neighboring Myanmar. That is the end of the story for the species. If the Indochinese tiger is to be saved from extinction and, through some miracle, allowed to disperse back throughout the rest of its range, Thailand is its only hope.

Same for the Indochinese leopard which was hunted out of Vietnam and Laos over a decade ago, but a few hung on in the Eastern Plains Landscape (EPL) of Mondulkiri province in Cambodia until somewhat recently. They are now gone, victims of an unprecedented snaring campaign that has blanketed the Indochinese peninsula with millions of high-grade industrial snares that even the poorest villagers know how to construct cheaply.

But most villagers—at least those in the sprawling EPL—aren’t looking to snare tigers and leopards; they’re going for wild pigs, hearty animals that can survive a week in a wire trap. When found, they are finished off with a rifle or club, and the meat is sold to wild game restaurants of the provincial capital of Senmonorom, as well as to the north in Ban Lung, capital of Ratanakiri province. Snares for them are laid far and wide, yet they’re taking everything else down with them. The result of this blanket snaring is that golden jackals and dholes have now become rare, the Indochinese leopard went locally extinct recently, and clouded leopards are ‘finished’ in the EPL.

The last place that offers any refuge or hope in Mondulkiri is a place that Mongabay recently reported on: Ko Seima Wildlife Sanctuary, a place which is already getting hammered and, as one of my contacts put it, is “next in line” for the devastation wrought across Mondulkiri. Bokor National Park in Kampot province is essentially being leveled to make way for a luxury home development.

Clouded leopards are now considered the last “king of the jungle” in Cambodia, and even they are in serious trouble in the Kingdom. Clouded leopards also remain in Nam Et-Phou Louey in Laos, but this is probably one of the last places. The only other feasible place where clouded leopards could remain in Laos is at the very foot of the country in an utterly neglected and unexplored patch of hilly jungle called Nam Ghong Provincial Protected Area (NGPPA). NGPPA is contiguous with Cambodia’s Virachey National Park, a spectacular ecosystem covered by Mongabay a few years go.

My team has camera trapped clouded leopards walking atop the high mountains which serve as the wild and unguarded international border between Laos and Cambodia, so it is feasible that they—as well as Asian elephants—which we rediscovered in Virachey after an absence of 10 years, make excursions into NGPPA, much of which still retains healthy forest cover. The only other place in Cambodia that has a viable population of clouded leopards would be the massive Cardamom Rainforest Landscape, which receives protection from the Wildlife Alliance, which coordinates with the Royal Cambodian Forestry Department. 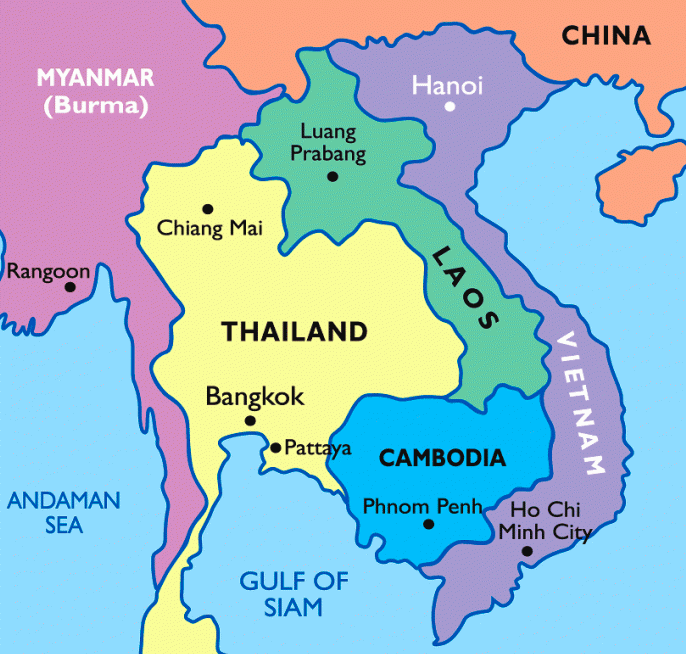 Virachey Park has been a lucky holdout, as its steep topography provides a natural deterrent to poachers and road-building, which is much unlike Mondulkiri’s flat EPL, which was essentially steamrolled by the snaring campaign carried out by both Vietnamese and local Cambodians—again, all so that city folk from Phnom Penh can drive up to the cool highlands of Senmonorom and dine on wild boar.

That is the simple sad story of the situation of what happened to the great cats, and much of the wildlife, in this region. Yet Virachey is still home to – in addition to clouded leopards and elephants – gaur, sambar, serow, Asiatic golden cats, marbled cats, otters, binturongs, black bears, sun bears, gibbons, red-shanked douc langurs, dholes, pangolins, and much more. And yet it remains an underprioritized area, though FFI and Oxford University’s WildCru have recently become active in the park.

The situation is starkly different in Thailand. In 2013 I received an email from Freeland’s Tim Redford inviting me to join his team on a “camera trap check” in a certain national park (I’m sworn to secrecy) because he had heard that I would soon begin a wildlife survey project in Virachey, and remarked: “You can’t just go throwing up cameras willy-nilly; there’s a way to do it.”

We heard a tiger roaring in the park the first night in that glorious park, and found its footprints the next morning, along with those of elephant and sun bear. Freeland has been so effective in protecting this cluster of protected areas (PAs), that they’ve now documented three generations of tigers, and this group of PAs is now literally bursting at the seams and the great cats are heading towards Cambodia and Laos.

Another fabulous Thai success story, and one that I can name is the Western Forest Complex (WFC), which is comprised of 19 PAs west of Bangkok bordering Myanmar. It is a place where tigers swarm and mix with Indochinese leopards (including their interesting all-black melanistic siblings), Malayan tapir, elephants, gaur, dholes, clouded leopards, gibbons, sambar, and much, much more. Big cats are even dispersing outside of the northern range of the WFC, and tigers have been found deep in the south of the Kingdom. WFC is abutted by several PAs on the Myanmar side of the border, and taken together, they form what is known as the Dawna-Tenasserim Landscape, one of the last great natural paradises remaining in Southeast Asia.

How did Thailand achieve this? Firstly, it’s not neighbors with Vietnam, so it wasn’t bombed during the Indochinese war, and tenacious Vietnamese poachers have much easier pickings by walking over the porous border into Laos and Cambodia, where few will challenge them, and many abet them for a fee.

Secondly, Thailand is wealthier than its Indochinese neighbors, and student groups rose up in protests during the early 1990s to fight for the preservation of Huai Kha Kaeng Wildlife sanctuary—centerpiece of the WFC and home to dozens of tigers—after the sanctuary’s legendary superintendent, Sueb Nakhasathien, took his own life out of exasperation from the pressures mounting against the place.

Finally, Thailand’s Department of National Parks (DNP) arms its staff and conducts patrols, and groups like Freeland work closely with them to conduct sting operations and SMART patrols. In the end, Thailand is the only real hope for mainland Southeast Asia’s rapidly dwindling wildlife, and conservation funds and efforts need to go, first and foremost, into patrolling and law enforcement to ensure that the Kingdom does not end up like its biologically depauperate neighbors. Studies and papers will do very little to stop the killing. Boots are needed on the ground.

But Thailand has its problems too. A group of Vietnamese poachers were found in the WFC a few years back and a firefight broke out between them and the DNP. Later, villagers informed the Thai police of their whereabouts and half were arrested, while the other half hoofed it back to Vietnam, but not before killing eight tigers.

Long-time Thai resident and renowned wildlife photographer L. Bruce Kekule related a story of how Karen people simply walk into the WFC with a few pineapples, some rat poison, and machetes. They find where the elephants are hanging out, impregnate the pineapples with rat poison, then hide in a nearby tree. Elephants come along, eat the pineapples and die. The poison is still active inside the carcass, and a tiger strolls by, munches on the dead pachyderm, and soon drops dead. They get tusks and a tiger without even firing a shot!

Furthermore, the Dawei Port in Myanmar envisions a multi-lane highway blazed through the center of WFC all the way to Bangkok, and it has been proven time and again that opening up virgin forests with roads leads to more deforestation, and more poaching, not to mention hunting dogs, some of whom carry canine distemper disease, which can transfer to tigers and other animals. Despite these challenges–and more could be listed–Thailand is far and away mainland Southeast Asia’s last best hope for preserving the region’s natural heritage.

Before concluding, it should be mentioned there are still some people and organizations fighting hard for what remains in Indochina, and they deserve respect and support. Ben and Sharyn Davis in Preah Vihear, Cambodia, are fighting tooth and nail to protect the last bantengs of the Phnom Tnout Forest, from their headquarters in the middle of the field at Betreed Adventures. Wildlife Alliance’s Rescue and Release program, run by veteran conservationist Nick Marx, has been instrumental in saving thousands of wild animals from markets and private zoos every month.

Many of these animals end up temporarily in the Phnom Tamao Wildlfe Rescue Center, but in a spellbinding move, otters, binturongs, hornbills, leopard cats, silvered langurs, and many others have been successfully rewilded into Angkor Archaeological Park, not far from the temples of Angkor. The idea of listening to pileated gibbons whoop away while contemplating the majestic temples blows my mind. Veteran conservationist Jonathan Eames, who heads up Cambodia’s Birdlife International program, fights hard for Stung Treng’s Western Siem Pang Wildlife Sanctuary, protecting 150,000 hectares of jungle, grasslands, and rivers. Over the border in Vietnam, PRCF strives to preserve the critically endangered Francois’ langur in a unique limestone karst landscape that is quickly being pulverized for construction material. Others could be mentioned.

Support what draws your interest and tickles your curiosity, wherever it is, and the groups listed above are excellent choices. Help is desperately needed across Southeast Asia. But in this author’s opinion, the big donors especially should set their sights on Thailand. If there is ever to be a regional recovery, Thailand is where it will start.

This commentary by Gregory McCann was first published on Mongabay.com on 7 June 2021. Lead Image: Clouded leopard. Photo by Rhett A. Butler for Mongabay. Gregory McCann has written for The Diplomat, Asia Sentinel, Taipei Times, Mongabay, and The China Post, and is the author of the book Called Away by a Mountain Spirit: Journeys to the Green Corridor. He is an Assistant Professor at Chang Gung University in Taiwan.