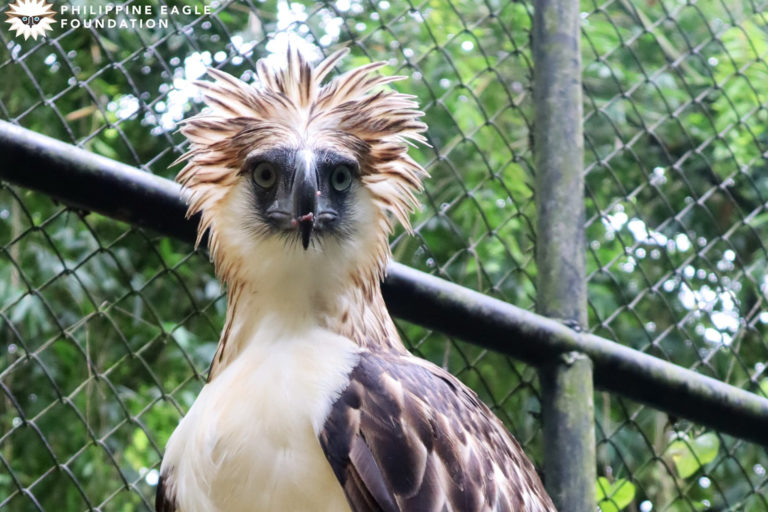 MINDANAO, Philippines — Efforts to conserve the critically endangered Philippine eagle, one of the rarest raptors in the world, soared high even amid the COVID-19 pandemic.

Despite the global havoc wreaked by the health crisis, the year 2020 ended on a high note for eagle conservationists, with at least two eagle families sighted in the Davao region of the southern Philippine island of Mindanao.

The Philippine eagle (Pithecopaga jefferyi) enjoys a special status as the national bird of the Southeast Asian nation, but faces extinction due to hunting and loss of habitat. Growing the population is difficult, as the birds are slow to reproduce. It takes them five to seven years to mature sexually, after which the female lays a single egg every two years.

There are only an estimated 400 nesting pairs of Philippine eagles left in the wild, so the sighting of new eagle families is always a milestone to celebrate for the Philippine Eagle Foundation (PEF), a nonprofit that has worked for more than 30 years in conserving the species.

Dennis Joseph Salvador, executive director of the PEF, said he’s optimistic the protection of the Philippine eagle is off to a good start for 2021, given the achievements of 2020, which came despite the debilitating impacts of the COVID-19 pandemic and the threats the birds face daily from human activities such as hunting and illegal logging.

“We have demonstrated over the past 30 years our commitment to conserve the mighty Philippine eagle and by hook or by crook, we will sustain that next year and in the years to come,” he told Mongabay.

In addition to the sighting of new families, in the seven months that followed the March 2020 start of lockdown in the Philippines, the foundation rescued seven birds with the help of mobile technology and social media.

PEF credited this record number of rescues to heightened public awareness and involvement of local governments in eagle conservation, rather than to an uptick in the number of captured or injured birds.

Most of the rescued birds had been captured by trappers, with one sold for 8,000 pesos (around $170) by the trapper to an outdoors enthusiast.

In some instances, rescuers had to work in the dead of night and traverse rugged terrain to fetch the distressed eagles hundreds of kilometers away in remote mountain villages.

Of the seven Philippine eagles rescued since the start of the lockdown, one died due to malnutrition, three were released back to the wild, and three remained at the PEF’s rehabilitation center.

“We are very glad that despite the pandemic’s travel and movement restrictions, we were able to save six of these seven precious birds, with three of them healed and successfully released back to their respective forest homes,” Salvador said.

The PEF says successful rescues involve collaborating with a wide variety of actors, including concerned citizens reporting eagles in distress; officials from the Department of Environment and Natural Resources (DENR) and local governments; as well as organizations that support the PEF. After each bird’s release, it continues to be monitored with the aid of community volunteers and their respective village and Indigenous community organizations.

One such release came on July 28, as the world celebrated World Nature Conservation Day. The rescued eagle, named Makilala Hiraya, was released back into the wild, tagged with a GPS/GSM tracker on her back, in the first such event ever livestreamed on Facebook.

But what astonished Philippine eagle conservationists last year were the sightings, a few weeks apart, of two families of the raptors: mated pairs and their offspring. The first family was spotted within Mount Apo Key Biodiversity Area (KBA) in November and the other in December within Mount Kampalili-Putting Bato KBA. Both KBAs are on the island of Mindanao.

Jayson Ibañez, research and conservation director at the PEF, said the organization has for years been searching for eagle nesting sites, particularly in Mindanao, where half of the estimated 400 nesting pairs of Philippine eagles are believed to live.

“The recent sightings of two families of Philippine eagles indicate that the forests where they’re seen are still pristine and rich in prey items for the raptors such as macaques, flying lemurs, hornbills, palm civets and snakes, among others,” he told Mongabay.

Unless disturbed or destroyed by human activities, Philippine eagle nest sites are considered ancient breeding grounds, since generations of eagle pairs will occupy the nest over and over again.

“Conserving these core areas of reproduction and keeping the nesting pair and their young safe is pivotal to the success of saving the species from being lost forever,” Ibañez said.

In November, the PEF team, in collaboration with state-run Energy Development Corporation, which runs a geothermal power plant within Mount Apo, launched the “Search for the King of Birds” campaign in the area.

The team spent 192 observation hours deep in the forest and emerged victorious after at least eight sightings of nesting pairs of Philippine eagles and their offspring.

Ron Taraya, senior biologist and expedition leader at the PEF, told of how he and the team got within 200-300 meters (660-980 feet) of a juvenile Philippine eagle in the wild. The bird exhibited characteristics typical of a 2-year-old of the species: awkward hunting moves, lower flight confidence, and limited flight duration.

“It amused us watching the bird take on a group of long-tailed macaques foraging on an escarpment just in front of the waterfalls,” Taraya said.

The young raptor failed to kill the target macaque, as the group faced off with the bird and grunted threateningly, prompting the eagle to back off and fly into a tree above the ledge.

A few days prior to the close encounter with the juvenile, the team saw a pair of eagles feeding their young one with freshly killed prey following the latter’s “food begging calls.” During the expedition, the team also documented the juvenile’s parents’ aerial rituals that appeared to be a courtship routine.

“The two eagles mutually presented their talons in mid-air, called ‘talon presentation,’” Taraya said. “They also did several bouts of flying together in spirals, or ‘mutual soaring.’ Then they flew to different directions; one disappearing inside the deep gorge, while the other landed on an emergent tree. There, the eagle stayed on its perch cleaning its feathers with its beak, called preening. It was also seen scratching, stretching and moving its head. After performing these general maintenance behaviors, the eagle finally flew off and glided beyond the waterfalls until it disappeared behind the tree line.”

In Mindanao, September to January is typically nesting season for Philippine eagles, and courtship displays precede each egg-laying event. Eagle pairs at several nest sites across Mindanao start their courtship rituals as early as July, and the routine can persist even after the pair has started rearing a chick.

The second sighting of a family of Philippine eagles, in early December, was in the town of Lupon, in the province of Davao Oriental, within Mount Kampalili-Puting Bato KBA. A team from the provincial government was assessing the area’s potential tourism sites when it spotted the birds.

Images of the juvenile perched on a tree and two bigger eagles were captured by a government photographer, Eden Jhan Licayan, which the PEF’s Ibañez later confirmed as being Philippine eagles.

While roughly 200 eagle pairs are believed to survive in Mindanao, Ibañez said only 39 pairs have actually been documented. This means more expeditions are needed to get the real numbers, he said.

“We are very happy every time we discover new pairs,” Ibañez said. “It is important to locate the nesting sites so that we can put in place protective measures to ensure they will be out of harm’s way so that the species can reproduce and will not become extinct.”

The oldest nesting site within Mount Apo was discovered in the 1970s, near its foot. An eagle pair continues to frequent the area today, according to Ibañez. The birds can live up to 40 years.

The wider Mount Apo range spans at least 90,000 hectares (222,000 acres), of which only two-thirds are classified as a protected area, adding extra complexity to the task of protecting eagle habitat and nesting sites.

To help with the conservation of the forest and the Philippine eagles in Mount Apo KBA, the Davao City government engages Indigenous communities through its “Bantay Bukid” (Forest Guard) initiative. Under the scheme, some 200 Indigenous men have been recruited as volunteer forest guards, for which they get a monthly allowance of 2,000 pesos (about $40), to patrol four identified nesting sites. Together, they keep watch over some 25,000 hectares (62,000 acres) of forest.

“With many pairs of eyes watching over the forests, it helped deter timber and wildlife poaching activities,” Ibañez said, noting that the Indigenous women also benefit through livelihood projects.

Despite the successes in the field last year, the PEF has taken a financial beating from the COVID-19 pandemic, according to Ibañez and Salvador. The foundation has had to appeal to the public for donations to keep its work going amid the health crisis.

Salvador said the PEF’s rehabilitation center, which usually welcomes about 200,000 visitors annually, lost its main income stream as the pandemic forced it to shut to the public from March.

“We lost about a third of our revenues … The large chunk of conservation money came from the gate receipts of the center,” he said, adding that the PEF has received the bulk of its funding from corporate and private contributors rather than from the government.

Ibañez said the center had lost some 2 million pesos (about $40,000) per month due to the lockdown.

But despite the debilitating impact of COVID-19 on the PEF, Salvador said the foundation will try its best to respond to the needs of the Philippine eagles in captivity and in the wild. The foundation hasn’t had to lay off any of its nearly 50 workers, thanks to the continuing support of its corporate sponsors, including some of the biggest companies in the Philippines.

To help get through the COVID-19 crisis, Salvador said they have launched crowdfunding initiatives through social media, appealing to the public for help in conserving the Philippine eagles.

The rehabilitation center reopened to the public in October, operating at a limited capacity and requiring visitors to book at least 24 hours in advance. To help recover the months of losses, the center raised its entrance fee to 300 pesos ($6) and added extra activities, including a viewing of the short film Kalayaan, about a juvenile Philippine eagle’s journey in the wild. Visitors need to wear face masks and face shields and observe physical distancing while in the facility, in line with wider efforts to fight the spread of COVID-19.

“Since we reopened our gates to the public, we have been receiving very few visitors but in some days, there’s no one visiting at all,” Ibañez said.

This article by Bong S. Sarmiento was first published on Mongabay.com on 8 January 2021. Lead Image: Philippine eagle Balikatan (shoulder-to-shoulder) was turned over by residents in the province of Surigao last September. Balikatan has an impaired eye and could no longer be released back into the wild, making him a permanent resident of the Philippine Eagle Center in Davao City. Image courtesy of the Philippine Eagle Foundation (PEF).