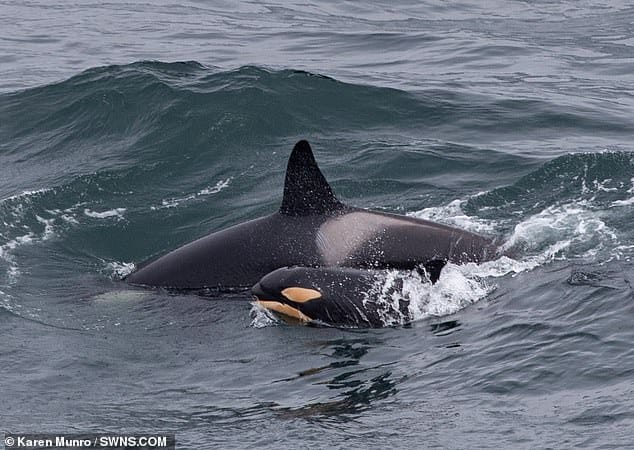 A lucky orca enthusiast has captured some incredible photos of a newborn calf swimming with its mother off the coast of Scotland.

The orange-tinted baby was accompanied by four older killer whales as it played in the Moray Firth, near Duncansbayhead, Caithness.

Wildlife enthusiast Karen Munro, 44, travels around Scotland from her home in Thurso, Highlands, hoping to catch sight of the astonishing creatures.

She couldn’t believe her eyes on Sunday (May 9) when they came between 10 and 20 metres of where she was standing.

Mother-of-one Karen said: ‘I’m part of a Facebook group full of orca enthusiasts like myself, where we recommend vantage points to each other.

‘I got alerted to a sighting of a pod in the Duncansbay area on Sunday, so I went up to see if I could spot them.

‘I went to two areas, but the orcas were about a mile away, so it was too far to get a decent sight of them.

‘When I went to the third spot, on a bit of a cliff, I couldn’t believe my luck when the pod came between 10 and 20 metres away.

‘They were swimming and using the tide to glide on the water.

‘I was thrilled to get such a close-up, it was a pod we don’t know a lot about.

‘It was extra special to see a young wee baby amongst it.

‘There’s a wee calf with a slightly orange tint, I would guess it’s only a couple of months old.

‘Five of us have worked together to put a catalogue together off all the orcas we spot and their markings, so it was great to get this new group added..’

Karen, who is a health surveyor, added: ‘People get a kick out of seeing the orcas.

‘They are magnificent animals, and especially to see them in the wild and not stuck in a swimming pool.

‘I’m an orca enthusiast, it’s my hobby. I’ve been to Norway, and to Iceland to see them. It’s also brilliant to see the orcas are reproducing.’

The sighting comes days after a pair of killer whales named John Coe and Aquarius were spotted off the coast of Cornwall for the first time in over a decade by a group of wildlife experts.

This was the first sighting of members of the UK’s only resident population of orcas, usually based off the west coast of Scotland, travelling this far south, said the Cornwall Wildlife Trust team that spotted the pair.

The pod they belong to, known as the West Coast Community, is made up of four males, including John Coe and Aquarius, as well as four females.

The two males were spotted on Wednesday swimming off the west coast of Cornwall, near the Minack Theatre, an open air venue on the cliffs of Penzance.

The orcas were identified as part of the UK group by the shape and notches of their dorsal fins, and patches of colouration near their eyes and on their backs.

This article was first published by The Daily Mail on 13 May 2021. Lead Image: A lucky orca enthusiast has captured some incredible photos of a newborn calf swimming with its mother off the coast of Scotland.