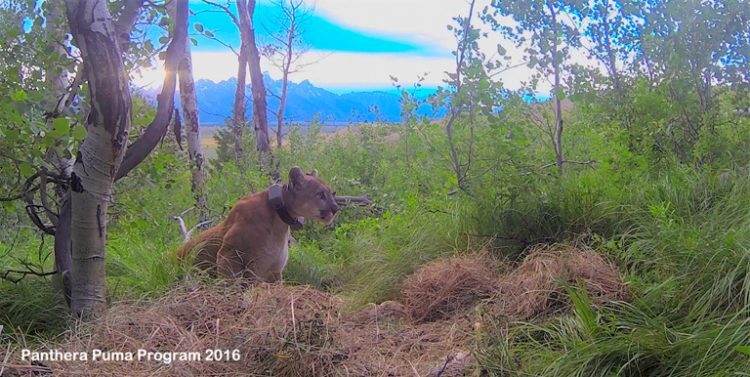 Like many places in the American West, the region is a patchwork of land that’s under the control of different government agencies with differing opinions and management goals.

“It makes that part of our country really unique,” Mark Elbroch, a biologist with the wild cat conservation group Panthera and one of the study’s lead authors, said in an interview.

But the decisions taken by those groups can sometimes result in unintended consequences.

In the case of this study, the combination of the reintroduction of wolves in nearby Yellowstone National Park in 1995, a decision to reduce the population of elk (a favorite prey species of the puma) through hunting, and increased hunting of pumas themselves formed what Elbroch called a “perfect storm” that nearly halved the mountain lion population in the study area.

Each of those factors hit different segments of the population. By 1999, a pair of wolves had moved outside the boundaries of Yellowstone National Park and taken up residence in the study area; over the next decade and a half, their numbers exploded to nearly 70 animals by 2015.

To have such a formidable competitor return to the pumas’ hunting grounds no doubt forced some of the mountain lions to retreat to more rugged terrain, Elbroch said; he and his colleagues are currently working on an analysis of the data to come up with more concrete answers on that front. Wolves will also steal pumas’ prey if they can, he said, and they can block adults from physically reaching the deer and elk they need to survive. But the most noticeable impact the wolves had was on the lions’ kittens, killing 18 percent or more of the ones the researchers tracked in the study.

The team also looked at a decision in 2000 to reduce the elk population in the Jackson area by about one-third. Over the course of the study, relaxed hunting restrictions saw elk numbers drop from 16,000 to 11,000. Elbroch said he initially didn’t think that would have played a role in the decline of pumas that they witnessed.

It turned out not to be.

“It’s not just 11,000 elk sprinkled on the landscape evenly,” he said. The elk instead gathered together in clumps throughout the area. A large group of elk started spending winters in broad valleys — not a great spot for pumas to hunt because of the likelihood that they would come across humans or wolves there. On the elk’s native range outside the National Elk Refuge, where lions would have access to them, the researchers found that elk numbers had tumbled by around 70 percent.

“That’s huge,” Elbroch said, “and I had never considered it.”

This irregular distribution of such a vital puma prey species took even the elk managers by surprise, and it led to higher starvation rates for the cougars across all age classes, the researchers concluded.

Elbroch said the impact puma hunting had on numbers of adults was also not surprising.

“It is the greatest cause of mortality for mountain lions throughout the West,” Elbroch said.

Now, with the Jackson puma population around 20 animals, his recommendation is to stop hunting them for three years, not just in the study areas, but in the adjoining slices of habitat as well, to allow the numbers to recover.

Perhaps also unsurprisingly, that’s a controversial opinion, as the state’s human residents worry about their safety and that of their livestock. (Elbroch said the threats are often a question of perception, as there’s never been a recorded case in which a puma has killed a human in Wyoming, and grizzly bears and wolves pose a greater danger to cattle and sheep.)

Many hunters, on the other hand, have joined the call to limit mountain lion hunting in Wyoming, which state agencies have done by about 70 percent in recent years. Elbroch and his colleagues often partner with local hunters, who, along with their hounds, help the researchers track down and catch the cats for tagging. While on the surface they might seem to be unlikely allies, Elbroch said the dip in lion numbers had concerned hunters as well.

He said the science now pointed toward the need to let the population recover. And it’s difficult to know whether the decline this research has tracked has stopped and the population is now stable.

What’s worrying beyond the current challenges that cougars in the Jackson area face is the potential for catastrophic hits to their numbers, such as a disease outbreak, a wildfire or a rash of collisions with vehicles on the region’s highways. A population with fewer pumas will be less likely to bounce back after these shocks, Elbroch said.

For those same reasons, Panthera has come out against a proposed 20 percent increase in mountain lion hunting in Nebraska, one of Wyoming’s neighbors to the east. This relatively new population has about 60 animals, Elbroch said in a blog post. Just as with the Jackson mountain lions, he advises proceeding with “extreme caution.”

“Based on science, you’ve got this tiny, little population. Why would you hunt it?” Elbroch said. “It just makes no sense.”

This article was written by John Cannon, a Mongabay staff writer based in the Middle East, and first published by Mongabay.com on 01 Aug 2018.