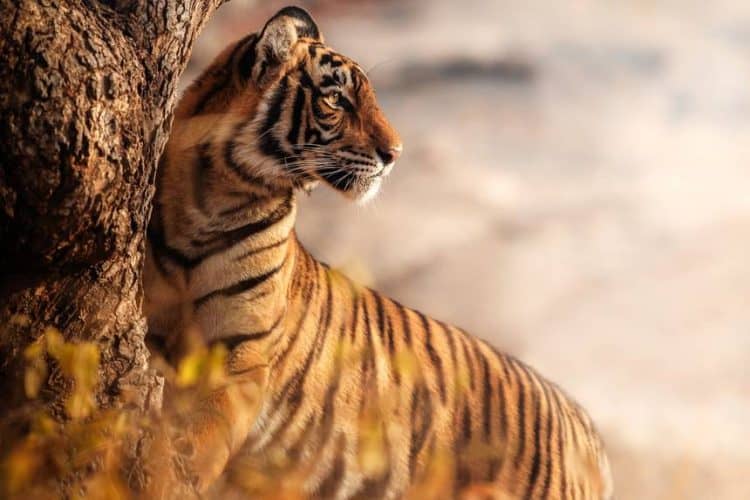 Deep in the Indian jungle, elders in an indigenous tribe called the Chenchu gather to write a letter to the outside world.

The Chenchu are going through this trouble to talk to you because they are afraid. Lately, the government has been trying to get them to leave the jungle. They live on what has been declared a tiger reserve.

The government says tigers need a human-free environment to flourish. It’s true that tigers have faced a lot of trouble from humans over the past few decades. In the 70s, there were only 2,000 tigers left in India.

But the link between tribal people and declining tigers is fuzzy at best. Poaching, logging and agriculture have been eating into tiger territory lately, while tribal people have been living in harmony with tigers for thousands of years.

“If a tiger or a leopard kills our cattle, we don’t feel disappointed or angry,” the Chenchu continue. “Instead, we feel as if our brothers have visited our homes and they have eaten what they wanted.”

YOU can make sure tribal peoples are listened to! Please RT @drharshvardhan, India’s Minister of Environment: Dr Vardhan, please listen to the Chenchu people and let them stay in their forest! #WorldTigerDay #conservation Full letter at: https://t.co/CiUgCqYBOi pic.twitter.com/jpXEAmsp18

In fact, the Chenchu may keep tigers and other forest plants and animals alive. When indigenous people are in an area, poachers steer clear and companies can’t just come in and use it for resources.

The Chenchu “consider themselves to be the eyes and ears of the forest,” explained Sophie Grig, a senior researcher at Survival International, an organization that campaigns for indigenous people’s rights. Grig is currently working with the Chenchu.

“All the tribal people we’ve talked to in India say, ‘If you remove us, the forest will be destroyed’,” Grig told me. “And actually, if you look around at where there is still forest in India, it’s pretty much where the tribal people are. Once they go, that’s when the companies come in, and it gets sold off for timber.”

In fact, Grig says the Indian government is currently looking into harvesting uranium in the area that the Chenchu people currently live. So, you know … Coincidence? I reached out to the Indian Ministry of the Environment, but they declined to comment.

The Chenchu are just one group among many facing this kind of thing. Hundreds of thousands of indigenous people are being evicted from dozens of regions around the country. It’s part of a pattern that’s been going on around the world for hundreds of years. Governments and businesses “encourage,” trick or force out indigenous people and ransack their lands for resources.

Legally, modern indigenous peoples in India are supposed to be able to choose whether they want to leave, but that choice can look a lot like extortion. For instance, when the government decided to evict the indigenous Munda people of India, they took Telenga Hassa, a Munda man, to see the resettlement villages. There, he saw people living under rows of black sheets propped up by sticks.

“It made my heart cry,” Hassa said, according to Grig.

So he and the other Munda were in good spirits as a forest service employee gathered them together one day to give them their forest rights, a piece of paper saying they had the right to live in the forest. The employee had them sign a paper. Many were illiterate, so they signed their names without reading.

Of the 750 families that used to live in Pecheru village, survivors say, only 160 families survived. Smt Bangataia of the Chenchu tribe shares her experience pic.twitter.com/wRAUxwtxVq

Once they signed it, the employee explained they just signed away their rights and agreed to be relocated in exchange for new homes and land. The government moved them out of their village and sent elephants to trample the village so they wouldn’t come back.

“They spent months in absolute squalor having to build their own houses,” Grig told me. “They didn’t get any land.”

While many tribes are removed, some manage to stay put. Grig says that the government is less likely to pull these tricks when they know people are keeping an eye on them. When the government tried to evict Soliga, another tribe, the Soliga fought back with a media campaign. The tribe got people around the world to write to the forest service, and the government backed off. According to Survival International, the local tiger population may have doubled after the Soliga were permitted to stay.

“We know that does really work, and we’ve seen it work again and again,” Grig said. “You don’t need huge numbers. You just need people to be aware they’re being watched.”

This article was first published by Treehugger.com on 08 Aug 2018.

Tigers and the Chenchu are the heart and soul of this special ecosystem. Leave them alone and together they can remain and maintain the magic.

All over this world, the indigenous people have been removed – slaughtered – “assimilated” into the so-called “modern” way of life! What was done to US native Americans is no different. Allowing this tribe of people to be removed from their land & their lives is unacceptable! Of course, there is profit to be made. IF the Indian government is so very concerned about the tigers – what happens when they mine uranium in that area? Think the tigers will be allowed to live there anymore than the people are? Shameful