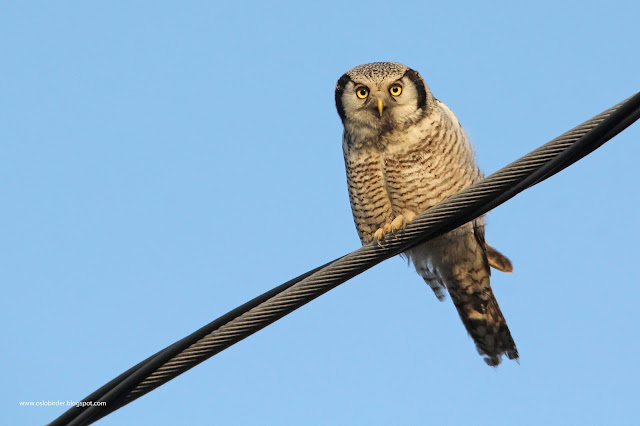 Today was warm – a whole 7 plus degrees! I’m not quite sure where this warm weather is coming from but it is forecast to continue over the weekend. There was also no wind and rather expectedly Oslo was covered in mist in the morning. I had a late start when I thought the mist would have burnt off away from Oslo and chose to look for the closest Hawkie to Oslo (other than the Sørkedalen bird which seems to have moved on). The bird is close to Drøbak, has been present for a month and I had previously paid my homages to it on 23 November.

When I got there it was glorious sunshine but it took quite a bit of searching before I eventually spied out where Hawkie was selling his wares. He was on a wire by a farm and I took a chance and drove up the track to farm. I got very close to him and the sun was on the right side but as I prepared to take a photo he flew down onto a low conifer in the hedgerow around the farm house. He had clearly seen a rodent there (seemingly in the garden) but didn’t pounce.

The light was a bit pants now and when he then flew even closer onto the top of a spruce right next to the car he had the sun right behind him – close but no real cigar. He then flew off into a nearby field and sat up on a wire above some rough grass. I drove away from the farm and found somewhere to park and then approached the owl. At some distance he dropped down into the grass and then flew up again with a mouse!

I was still some way away but tried to come closer to document meal time. However, he proceeded to fly into a small copse where I saw that he stashed the mouse and then flew back out onto the wire. Clearly times are good if he has enough food to have a larder!

I then waited for him to catch another mouse and although he was looking hard he never pounced again before eventually flying back to the farm and perching up on the barn. Although he was on a wire in the middle of a field and it was sunny, the sun was so low that it was only once that the bird was actually in the direct sun but it gave a nice golden glow to the bird and I’m quite happy with my photos.

Despite the obvious presence of rodents, I had only one Great Grey Shrike in the area which last winter held at least 4 birds.

A quick visit to Maridalen revealed the shrike right in the south of the valley where I have never recorded him before and this suggests that he is having to work hard for a meal. The Scaup is still present and may make it into 2017 if the lake doesn’t freeze over (the current ice that has formed should melt now). The last two days there have also been an adult and two juvenile Whooper Swans on the lake.

From their behaviour it is not clear to me whether they are a family group and it could be that the two youngsters arrived on their own and joined up with the lone adult I saw on Monday. I think it is unusual for juvenile Whooper Swans to leave there parents so early and if they have then it would be the result of an accident I think. If they are present with the adult though then this also suggest that something has happened to the other parent. 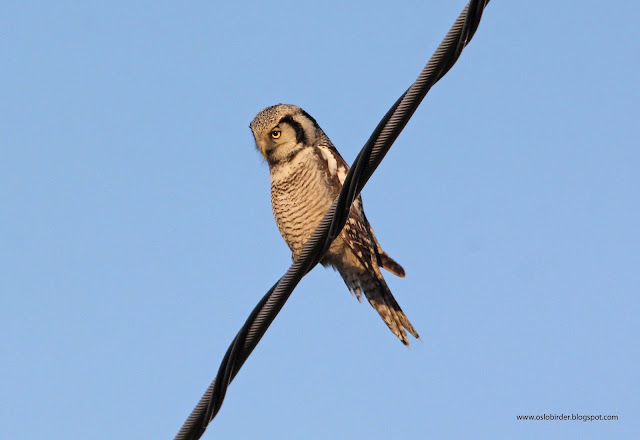 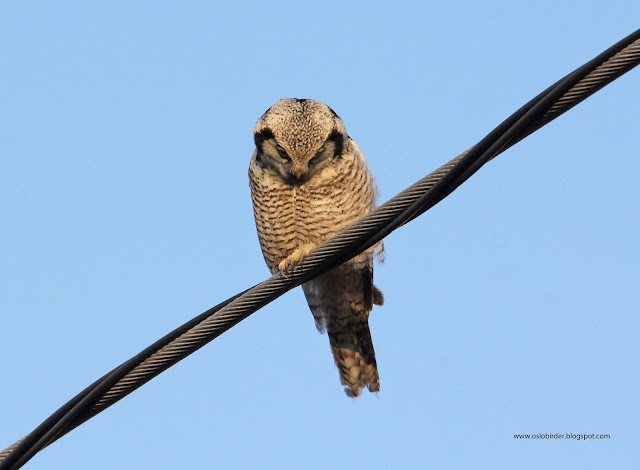 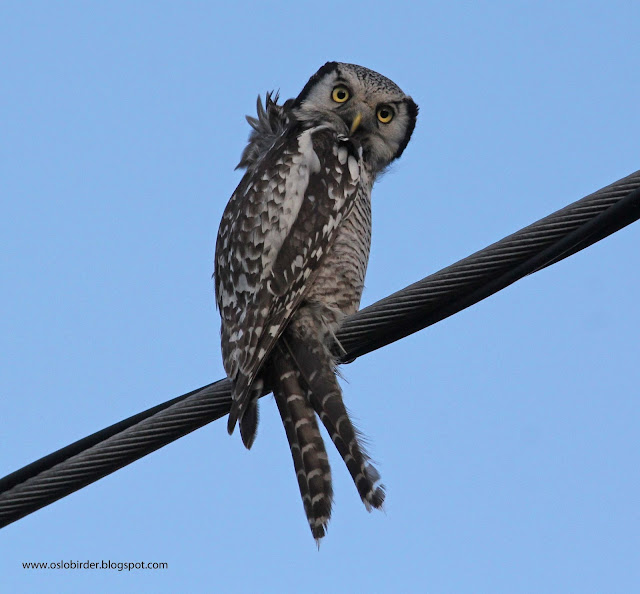 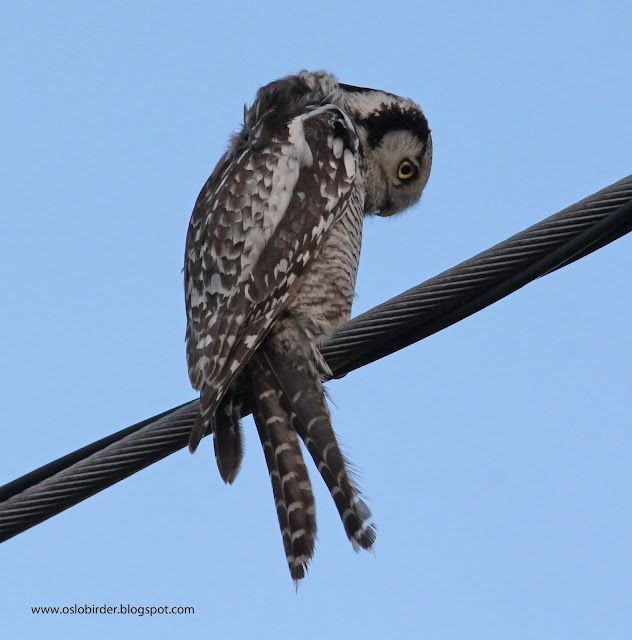 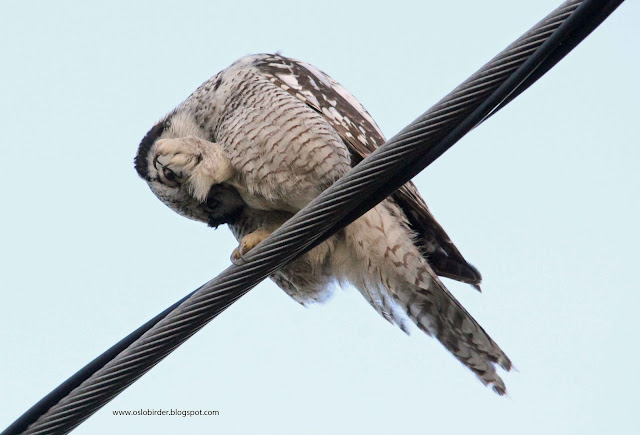 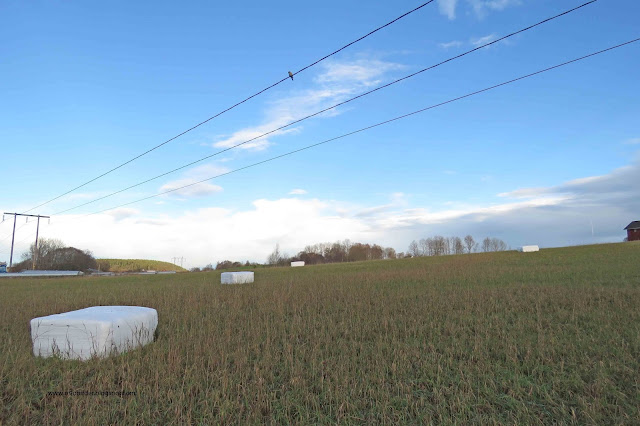 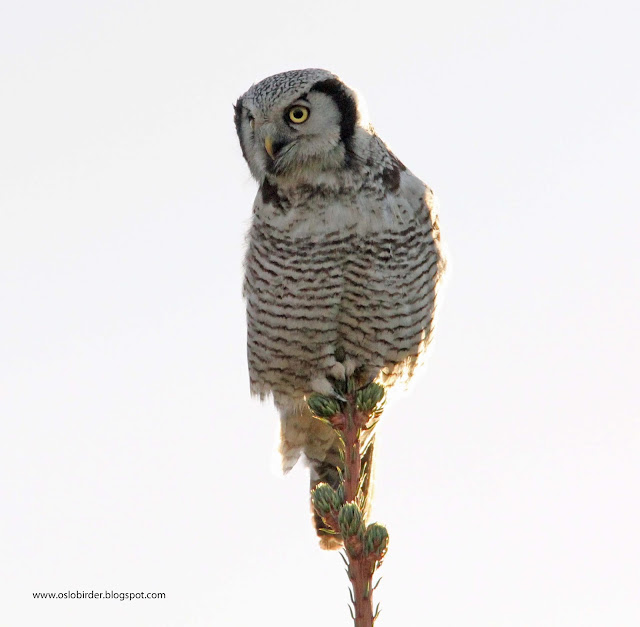