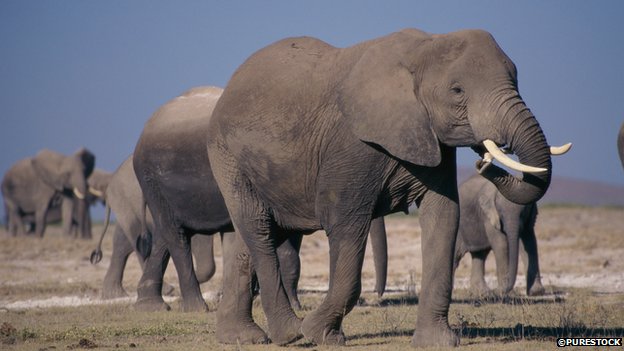 More elephants also choose to live inside the park, suggesting they “know” which areas are safer to live in, and actively avoid humans. Details are published in the African Journal of Ecology.

Serengeti National Park helps protect animals from threats such as illegal hunting and habitat disturbance. With no fences around protected areas in the Serengeti, animals and people may come and go, and elephants can enter into areas where they are at greater risk.

The study aimed to determine African elephants’ (Loxodonta africana) welfare inside Serengeti National Park and in the partially-protected adjoining areas of Grumeti Game Reserve and Ikoma Open Area, where human disturbance is greater. By testing elephant dung, the research team found animals outside the national park had significantly higher levels of the stress hormone, gluccorticoid.

Also, more elephants lived inside the park, while no single males were seen outside, suggesting the elephants preferred residing in potentially safer areas. “The reason is most probably that elephants try to avoid human-elephant interactions,” said research team member Dr Eivin Roskaft from the Norwegian University of Science and Technology in Trondheim.
Elephants never forget?

The elephants may have learned to associate humans and vehicles with the hunting activity that occurs outside Serengeti National Park. “Elephants probably remember where they are, and that bad experiences stress them,” Dr Roskaft told BBC Nature. “I think elephants know where they are safe or not. However, sometimes they also are tempted by nice food outside the park which attracts them to such areas.”

The study is the latest research to show that animals avoid areas with human disturbances. A previous study, for example, showed African elephants became stressed even before raiding farmers’ fields for crops. The research team hope their latest study demonstrates how protected areas such as Serengeti National Park can improve elephants’ welfare.

Law enforcement within the park aims to reduce illegal meat and ivory poaching. Despite this, hunters still frequent the edges of the park and surrounding areas. “The biggest threat to African elephants and other wildlife is the human population increase outside all such parks,” said Dr Roskaft.

“Humans need food, and wildlife is cheap and easy. Therefore the pressure on such animals increases.” According to Dr Roskaft, elephant poaching is once more increasing. “The elephant population in Africa is presently declining at an alarming rate,” he said. “The world must find interest in it, if not there will be very few or no elephants in Africa in about five to six years.”

This article was written by Michelle Warwicker and published by BBC Nature News.