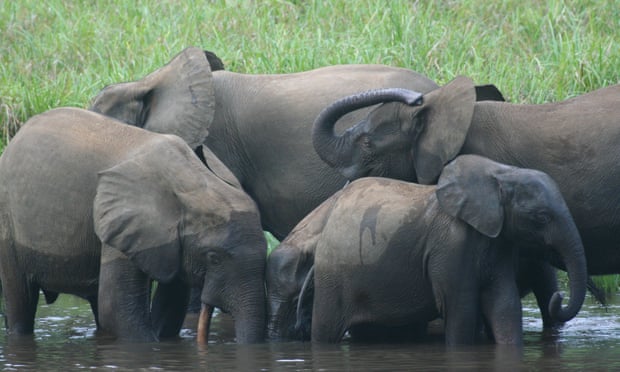 Science and conservation politics have finally agreed that Africa is home to two elephant species: the savanna and forest elephant. The debate lasted about two decades, with the politics of elephant conservation and the ivory trade delaying the decision, but the International Union for Conservation of Nature (IUCN) has finally concluded its evaluation.

Africa’s most recognisable pachyderm is the savanna elephant, Loxodonta africana, the largest land mammal, reaching up to 4 metres at the shoulder. Their huge ears are the shape of the African continent. Their majesty, combined with the open habitat they roam, means that virtually every elephant photo we see is of the savanna species. One of my first memories is of a big savanna bull in the water above Murchison Falls in Uganda where I grew up. No African safari is complete without an elephant encounter.

But when I arrived in Gabon from England in 1989 to study for my doctorate, I got to know the forest elephant, Loxodonta cyclotis – a very different beast. There were an estimated 70,000 forest elephants in Gabon at that time living in the shadows of Africa’s rainforests. They are smaller than their savanna relatives – males rarely exceed 2.5 metres at the shoulder – but are essential to the survival of the rainforest (and its carbon storage) through their dispersal of seeds, delivery of compost and mineral-rich dung, and thinning of saplings. The forest elephant is a constant gardener.

But in 2021, forest elephants are fighting for survival. Although the ivory trade was banned in the 1980s in response to the intense poaching of savanna elephants, the Convention on International Trade in Endangered Species (CITES) held a one-off sale of ivory from southern Africa in 2008. Ivory poaching exploded again. The first ivory wars, described in Iain Douglas-Hamilton’s classic book, Battle for the Elephants, which inspired me to become a conservationist, targeted principally the savanna elephants. But in 2006, the poachers went into the forests in search of the preferred pink ivory of the forest elephant, which is denser and more easily carved into intricate statues.

We lost 75% of all forest elephants in the following 15 years – more than 95% of the Democratic Republic of the Congo population and 90% of those in Cameroon. Gabon lost 25,000 elephants to transnational organised crime, with some of the ivory ultimately funding terrorist groups. My team and I found ourselves in a war, biologists turned warriors.

Personally, I cannot imagine a world without elephants, but we will have to fight for that future

The biggest threat to forest elephants today, however, may not be the poachers’ guns, but the climate emergency. More than 30 years ago I joined a study of rainforest ecology in Lopé, Gabon. Today, through ongoing research with colleagues from the Gabon national parks agency and the University of Stirling, we have a unique record showing that the rainforests of the Congo basin are starting to feel the impacts of changes in the climate. Due to climate stress we have lost 80% of the fruit production of the rainforest trees and lianas, and the elephants are thinner than they were two decades ago.

In Gabon, despite heavy losses to poaching, reports of elephants crop raiding seem to increase every year. The recent research on fruit declines may provide the answer – are elephants leaving their rainforest home because they can no longer find enough food? Despite the country’s position as an elephant sanctuary during the past century, public support in Gabon for elephant conservation is becoming fragile. Rural people, victims of crop losses, accuse the government of “protecting elephants more than people”.

Yet in the developed world, elephants are considered almost unanimously positive. My guess is that there are more toy and souvenir elephants in London than there are living elephants in Africa. We need urgently to harness this great love of elephants to the task of finding socially equitable solutions for their conservation. The future of forest and savanna elephants will be decided in the hearts of people in developed and developing countries. Do we have space on this planet for such a magnificent, complex pair of species?

Personally, I cannot imagine a world without elephants, but we will have to fight for that future. The “critically endangered” label will hopefully mean that the international community takes the plight of the forest elephant all the more seriously.