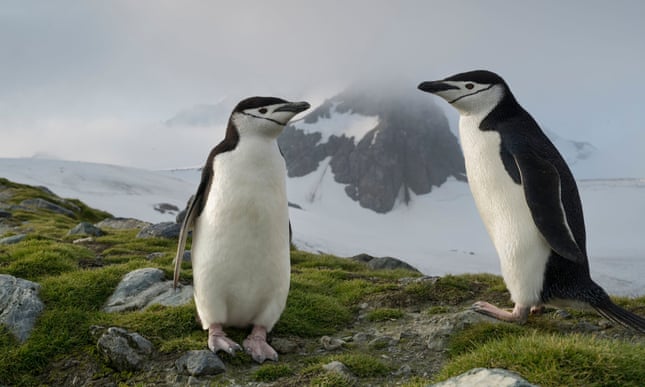 Colonies of chinstrap penguins have fallen by more than half across islands in Antarctica, prompting scientific concern that “something is broken” in the world’s wildest ecosystem.

After more than a month counting chicks in the South Shetland Islands, researchers suspect global heating is behind the sharp fall in numbers of the distinctive birds, which get their name from a black line that runs below the beak from cheek to cheek.

Using drones and handheld clickers, the team of four scientists from Stony Brook University in the US found only 52,786 breeding pairs on Elephant Island, 58% fewer than in the last survey in 1971.

Travelling on a Greenpeace expedition, the scientists also conducted a penguin census in the snow, fog and freezing rain of Low island, where preliminary figures indicated a similar scale of decline in what is believed to be the largest chinstrap population in Antarctica.

It was the same story on Livingston island, where the team braved choppy seas to land by the rocks of Hannah Point and conduct a count that was far down from previous estimates.

The full tally from each island will not be released until the expedition is completed, but the researchers said the trend was clear and disturbing; chinstrap colonies are shrinking, leaving space for another species of penguin, the gentoo, to move in.

“This shows something in the marine ecology is broken, or has drastically changed since the 1970s,” said Noah Strycker, a scientist and author, during a research camp amid tens of thousands of penguins on Low island.

Breeding success rates remain consistent, he noted, which means the cause of the chinstrap decline is something that affects the birds after they become juveniles.

Scientists believe the most likely cause is climate disruption. Human-driven heating has pushed up winter temperatures on and around the Antarctic peninsula by 5C above pre-industrial levels – one of the fastest rises in the world. Recently,the region recorded a new high of 18.3C, smashing the previous record of 17.5C.

Sea-ice is forming later and melting earlier, which is weakening the Antarctic food chain. The ice is vital for phytoplankton, which fatten up the shrimp-like krill on which the chinstraps feed.

“While several factors may have a role to play, all the evidence we have points to climate change as being responsible for the changes we are seeing,” said Dr Heather Lynch, one of the expedition’s lead researchers.

The research confirms separate findings from other less remote areas that suggest the Antarctic has “climate winners and losers”. The orange-beaked gentoo appears to be replacing the chinstrap, a specialist that depends on krill and ice. The gentoo is described by some scientists as the “pigeon of the penguin world” because it a generalist with a varied diet that includes fish and squid and an ability to thrive in a wider range of conditions.

But there are far more losers than winners. Most penguin species are suffering from the warming climate. Two years ago, scientists warned 70% of king penguins could either disappear or be forced to find new breeding grounds by the end of the century. An earlier study found 60% of the Adélie penguin habitat in Antarctica could be lost.

With krill declines of up to 40% in some areas of the Southern Ocean,there are concerns of a knock-on effect on other predators, including whales and leopard seals.

The sharp fall in chinstrap numbers has prompted calls for the bird to be classified as a species of concern. In 2012, satellite population estimates found numbers were down about 39% between 2003 and 2010.

Greenpeace said the decline of the chinstraps highlighted the need for stronger climate action and greater wildlife protection in the world’s most remote corners.

“Governments must respond to the science and agree a strong Global Ocean Treaty at the United Nations this spring, that can create a network of ocean sanctuaries to protect marine life and help these creatures adapt to our rapidly changing climate,” Louisa Casson, oceans campaigner at Greenpeace, said.

In October, the Antarctic Ocean Commission will discuss three sanctuary proposals, which were rejected last year.

This article was first published by The Guardian on 11 February 2020.