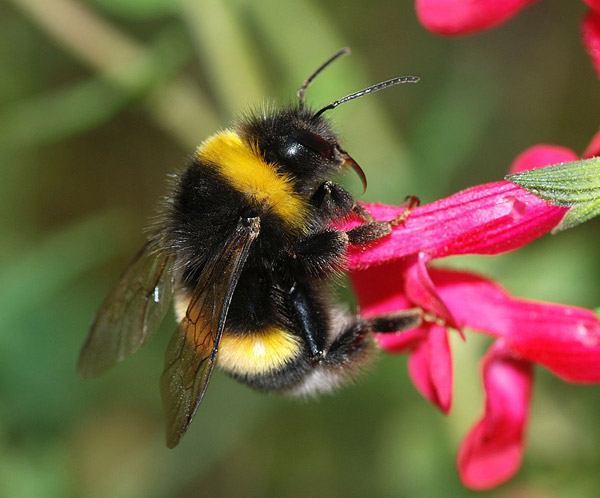 The genus Bombus consists of over 250 species of large, nectar-loving bumblebees. Their bright coloration serves as a warning to predators that they are unwelcome prey and their bodies are covered in a fine coat of hair—known as pile—which gives them their characteristically fuzzy look. Bumblebees display a remarkably capable flight performance despite being encumbered with oversized bodies supported by relatively diminutive wings.

It is then striking that scientists have discovered some species of bumblebee occurring naturally as high as 5,600 m (~18,350 feet) in the Nepalese Himalayas. Curious about how these bees adapt to flight in rarefied and hypobaric (low pressure) atmospheres, and supported by a grant from National Geographic, Michael E. Dillon and Robert Dudley set out to test the aerodynamics of the alpine bees.

They captured six male bees of the species Bombus impetuosus from China at an elevation of 3,250 meters (~ 10,600 feet), and introduced them individually into a flight chamber. There, they carefully lowered the pressure of the chamber in increments corresponding to an increase in altitude of 500 m, noting the altitude at which the bees flew best and at which they experienced complete flight failure. They also analyzed flight pattern videos at various simulated altitudes, while taking careful measurements of the body weight and thorax sizes of each bee.

In their recent study published in the journal Biology Letters, Dillon and Dudley state “all bees successfully hovered at air pressure equivalents exceeding 7,400 m, three flew above 8,000 m, and two flew at air pressures corresponding to altitudes higher than the peak of Mt. Everest.”

Further study revealed that this striking phenomenon was demonstrated not by the bees’ increasing the frequency with which they flapped their wings, but by significantly increasing the angular extent of their wing motion.

Neither the temperature of the air nor individual body mass had any effect on the maximum flight altitude attained by each bee, but there was a slight indication that having larger thoracic mass (or enlarged midriffs) was an advantage.

These findings are particularly impressive due to the many difficulties that insects face when flying at high altitudes. Since forces produced by wing flapping are directly dependent and proportional to air density, the thin air at high altitudes produces a harsh reduction in the force required to balance the body weight of a flying insect. Further, the elevated metabolisms of flying insects require them to have the highest demand of oxygen for their body weights of any other avian creature. These bumblebees appear to have overcome these difficulties with aplomb.

The ability to rapidly adapt to changing altitudinal gradients, the authors suggest, could be used by males in long foraging runs across elevational gradients, or to produce the sudden bursts of speed required in mating behavior or in the avoidance of predators. The authors suspect that female bees, with smaller wings relative to body size, might not be capable of similar feats of aerodynamic flying but further study is required to ascertain the validity of this assumption.