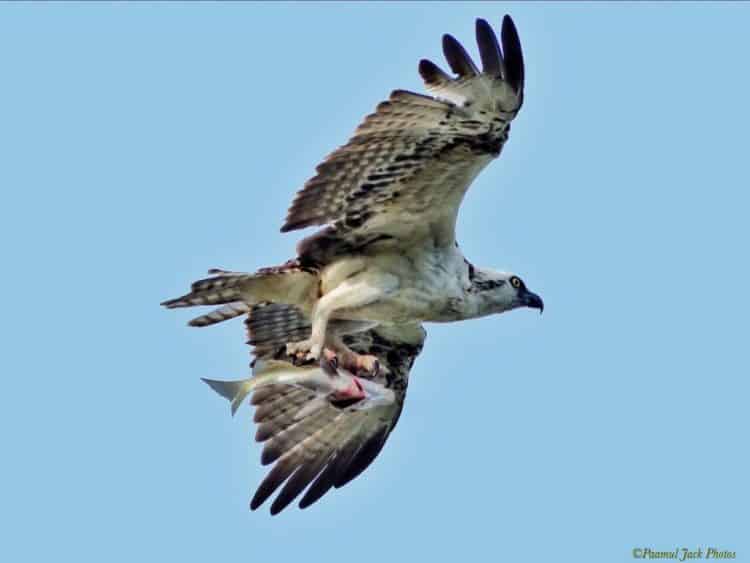 We have all heard or used the expression “Bird-Brain.” Birds have comparatively small brains, and because of that we humans place them at a very low level of intelligence. Yes, we recognize that we can train birds of certain species to react to a limited assortment of commands, but animal science has, until now, been unable to attribute to birds the capacity to THINK.

As it happened, a Riviera Maya retiree and an enthusiastic wildlife researcher, has recently proven beyond any doubt that a local wild bird clearly demonstrated not only its power to think, but to use its logic to manipulate humans.

The following is the retiree/researcher’s account of the discovery, and undeniable evidence to support it:

I have been a Riviera Maya retiree for a good number of years.

The Riviera Maya is a narrow strip of beach between the crystal-clear Caribbean and the thick Yucatan jungle. It offers any serious wildlife researcher a rare combination of sea-creatures on one side, and jungle animals and birds on the other. This resulted in the evolution of a fascinating bird, the osprey, that lives in the jungle, but feeds on sea- life.

Several years ago, my attention was drawn to a few local ospreys. I became familiar with their favorite “observation posts” on selected tall palms along the beach as well as with their feeding schedule.

I discovered that they were wonderfully skilled in spotting prey while hovering over the water at great heights. They quickly dive to grab big fish with their huge claws, then fly back to their favorite palm tree to enjoy the meal. One particular large osprey caught my attention when he seemed to tolerate my presence more than the others.

At first, he would tweet loud warnings at me – and even fly away – when I approached to photograph him. But after a while he almost seemed to welcome my visits, allowing me to stand right under him.

Up to that point, our “friendship” did not seem extraordinary, but I was very puzzled when I noticed that he started dropping down to me fleshy chunks of his catch, as if sharing his meal with me. I had never encountered that sort of behavior before.

This extraordinary expression of hospitality by a wild creature triggered within me a desire to reciprocate by treating my osprey friend with my own offerings. 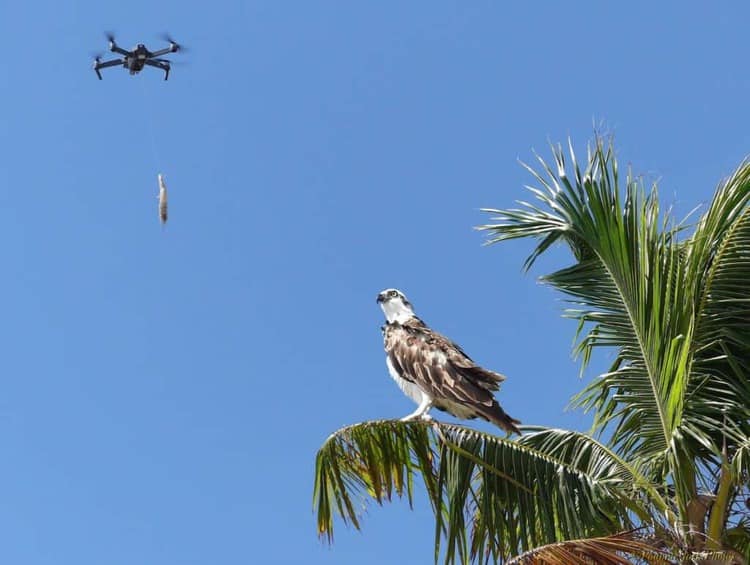 The answer sparked within me while flying my Mavic drone one morning, to video a spectacular sunrise. It happened to be a Thursday – the weekly market day at our community center, where a Progresso fisherman sells fresh shrimp. I brought home a few large shrimp, charged up my drone’s batteries, and headed for my osprey’s favorite palm-tree. He was perched there, as if expecting my visit.

Although I had never attached anything to my drone before, I now used a short piece of fishing-line to tie one of the shrimp to the belly of the drone. I clicked the take-off button to launch the drone and let it hover low for a while, so as not to scare the osprey away. I then maneuvered the drone gently upwards, as he was watching closely, and stopped it a few feet from him. I now remember that, although some of my friends are interested in my drone activities, I deliberately avoided inviting anyone to witness this adventure – for fear of rumors that may spread later about the state of my sanity.

I nearly let out an ecstatic, joyful scream when he spanned his wings and snapped the shrimp off the fishing-line. He placed it between his claws and devoured it instantly. It was obvious that he considered shrimp an irresistible delicacy. I treated him with one big shrimp daily, while the weather was suitable for flying the drone, but after that rain and wind-velocity kept us apart for several days.

When I came back to the tall palm on a sunny morning with another shrimp, his demeanor indicated a mixture of scolding frustration and, at the same time, genuine excitement to see me again. I tried to lure him down, holding the shrimp with my arm extended toward him, hoping he would behave like a pet parrot and eat out of my hand. But the delay in launching the drone only caused him to express his growing anxiety by tweeting loudly at me. I fed him the shrimp with the drone, took a few more pictures, then boarded my golf-cart for the 10 minute ride home.

What I found utterly interesting, was that – for the first time ever – I saw him in the sky high above me several times on my way back. A few minutes later, when I was out on my second-floor sea-front balcony, I could see him flying around nearby, confirming my suspicion that he followed me all the way home.

What a surprise it was for me, to see him there the next morning, flying back and forth not far from my balcony. Then a thought flashed through my mind:

“Since he is already here, why not serve him his shrimp right off my porch, thus saving a trip with the drone to his palm tree?”

I tied a shrimp to a long wooden stick – as I had done with the drone – and positioned it high up forward of the railing. Within less than 10 seconds, as if waiting for it, he flew by, snatched the shrimp and disappeared. 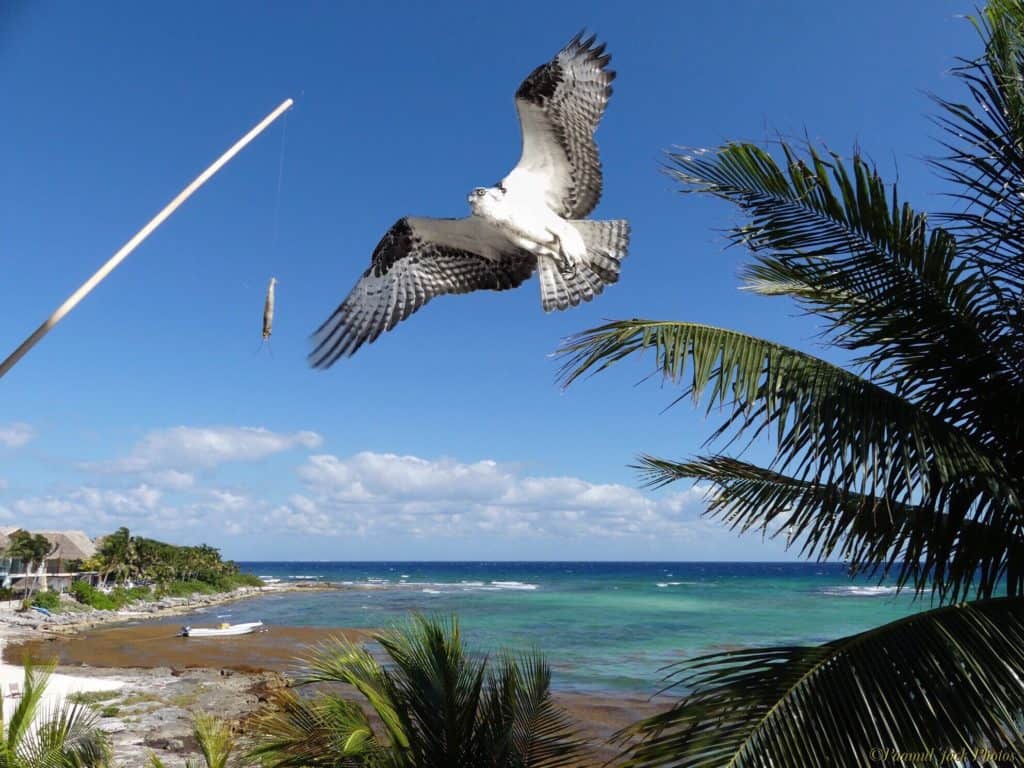 During the next 24 hours, I was tortured by curiosity: “Will he come to the balcony again tomorrow?”

I waited on the balcony till mid-morning, without a sign of him, but just as I was about to leave for the jungle trail, I saw him through the large sliding glass doors – circling and hovering near shore, searching for prey in close proximity to my condo. This puzzled me, knowing that his favorite fishing area is in waters adjacent to the jungle, far from any housing developments. Being well familiar with his fishing skills, I grabbed my camera and rushed out to the balcony, hoping to focus in and get a good shot of him while he flies by me with his catch in his claws.

After several empty-handed dives, he finally came up with a good size fish. I followed his movements through the camera’s viewfinder, waiting for a good side-view that will show the size of his fish. To my astonishment, he was flying straight towards me without wavering sideways. I thought I was dreaming when I saw him land near the railing at the front corner of my balcony.

He hesitated there, looking at me for a few seconds, as if saying “This is for you, Shrimp Man,” then left the fish and hovered around a short distance from the balcony. I brought the long stick out again and treated him to the shrimp. I expected him to return to his fish after gulping down the shrimp, but he took off to the jungle, leaving the fish on the porch for me, as a gesture of appreciation. 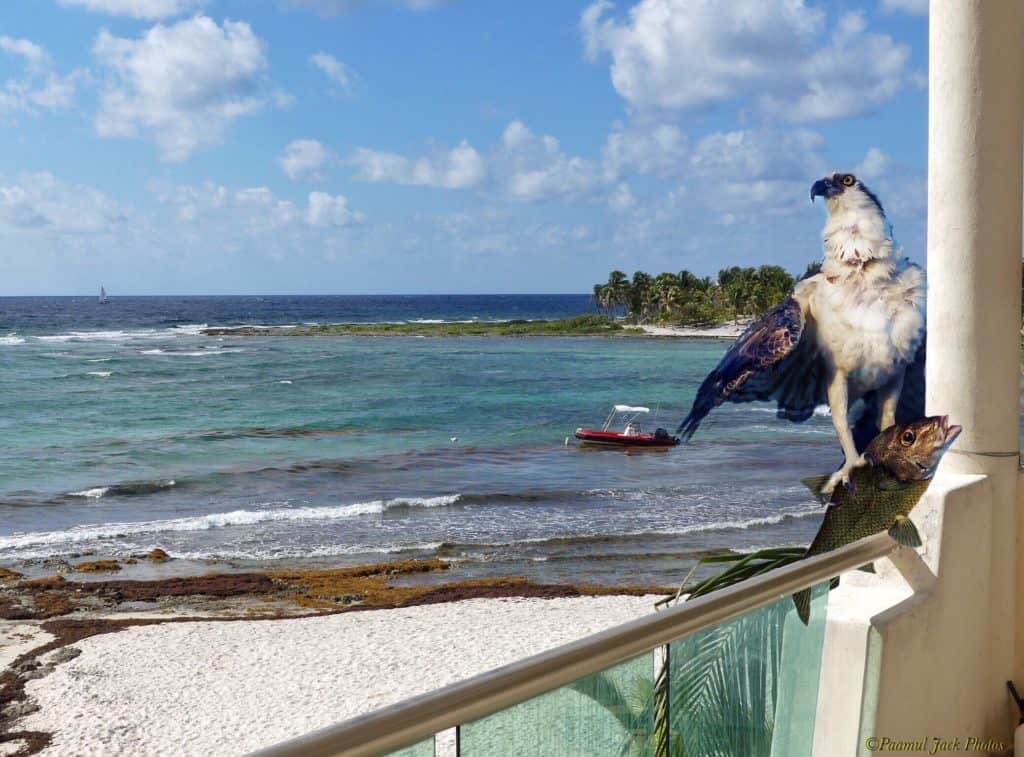 At that point I decided to name him Einstein!

When Thursday came, I bought more shrimp, anticipating this strange exchange to be repeated. Sure enough, he came back, brought me another fish, and waited for his shrimp. This turned out to be a daily ritual, allowing me to enjoy a fresh fish-dinner every evening.

A few neighbors noticed the strange activity on my porch, and began to anticipate his arrival. An obviously jealous and humorous neighbor asked me one morning if I plan to teach the osprey how to descale and clean my fish before bringing them to my porch.

This logic-defying exchange between a human and a wild bird continued for 12 days. On day 13, I was in for another mind-blowing surprise. That morning, the osprey deposited on my balcony a large Snook – my favorite fish. 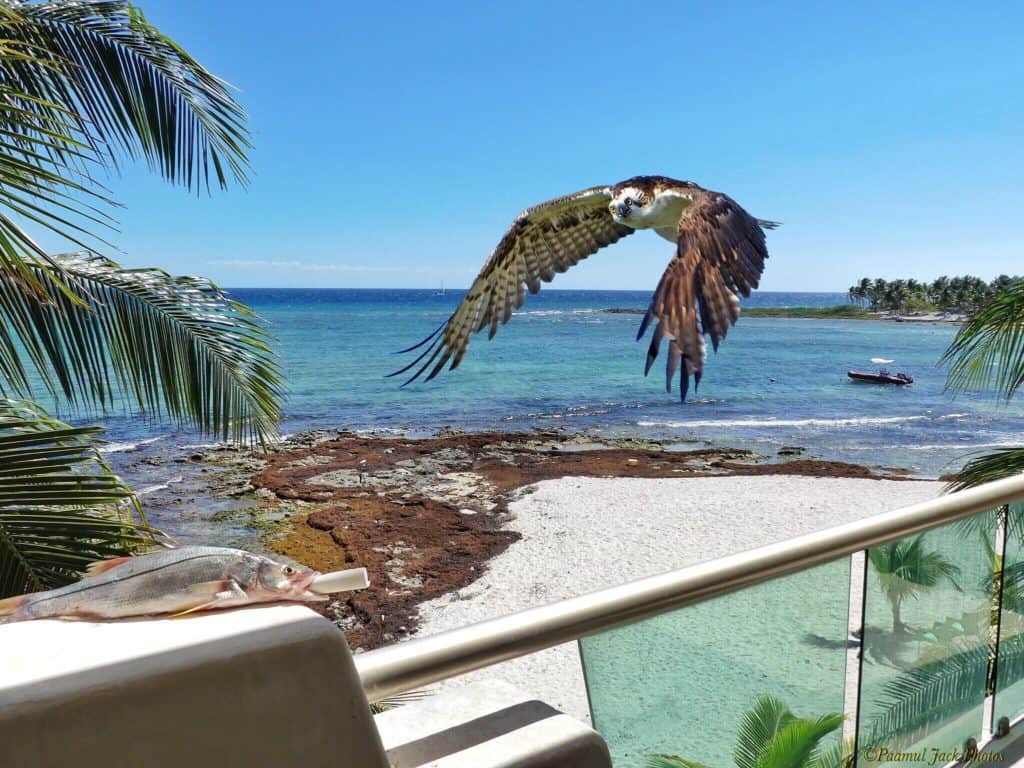 When I first saw the Snook through the sliding glass doors, there seemed to be something odd about him, so I went out, without the shrimp, to get a better look. A cylindrical object seemed to be protruding out of his mouth.

As I got closer, I nearly froze in my track, with an uncontrollable chill running up my spine. It was a neatly rolled-up piece of canvas, akin to the canvas used for printing my photos. I pulled it out of the fish’s mouth, unrolled it carefully, and found myself staring at a short message: