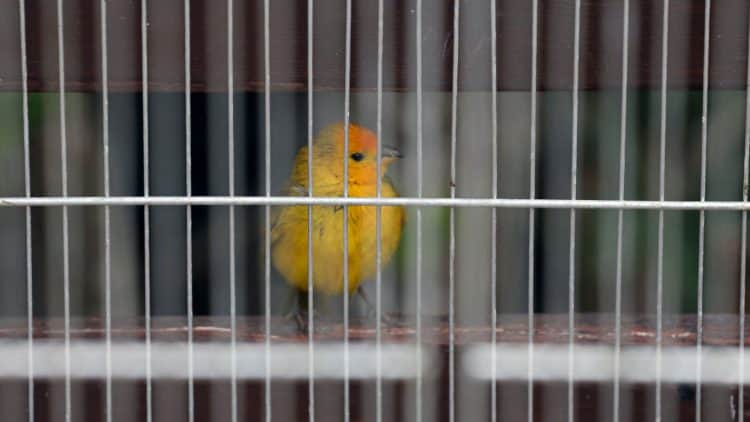 Thousands of saffron finches are being snatched out of South American forests and sold in Brazil for use in brutal, illegal fighting rings. Lax wildlife laws have made it difficult for authorities to crack down on the lucrative trade, leaving traffickers and ring runners undeterred.

Dozens of tiny yellow birds chirped as they flitted from side to side in two metal cages sitting in the back of the São Paulo Environmental Military Police truck. It was January 2020 and biologists had just given officers the OK to release the birds — 46 saffron finches rescued from an illegal fighting ring — back into the wild.

The officer behind the wheel, dressed in green camouflage and dark sunglasses, pulled up to some brush, the sun high in the sky. The engine off, he placed the cages on the hood before opening their doors, allowing the birds, one by one, to fly toward some nearby trees.

The finches had been apprehended from the home of a 56-year-old man in São José do Rio Preto, a city of just over 460,000 located five hours northwest of São Paulo. He was arrested for keeping the birds in captivity and running a saffron finch fighting ring. Police discovered he used to be a legal bird breeder, but his registration had been revoked in 2010 after he was fined for irregularities in his business. He denied running rings, but officers also apprehended ID tags, scales, and a cage for capturing birds in the wild — all equipment used in the illicit practice.

As in illegal dog or cock fights, the pint-sized passerines would have been made to fight to the death for the entertainment of men placing bets. Bird owners and ring runners sharpen the beaks of two male birds and attach a minuscule metal hook to one of their legs before putting them together in a small cage, riling them up by playing a recording of a saffron finch call, or placing a female finch in the cage with them or next to them.

The birds are minute — ideal fighting weight is between 28 and 30 grams, the same as a dozen pennies — but territorial. In the wild, they would fight until one bowed out and flew away. But in a cage, a champion fighter can become a killer.

Abundant in most parts of Brazil, the saffron finch is an easy target for traffickers who want to funnel the tiny songbird to illegal fighting rings, where big money can be made. Cultural tradition, flawed regulation, and the fragmented nature of the illegal practice have made it difficult for authorities to shut it down and punish the perpetrators, leaving traffickers and ring runners undeterred.

The saffron finch is the most trafficked bird in Brazil. According to data from the Brazilian Institute of the Environment and Renewable Natural Resources (IBAMA), the environmental agency seized 3,115 of the songbirds in 2018 and part of 2019. That’s 31 percent of the total number of birds seized by IBAMA in those years, making it the agency’s most apprehended bird. It’s also the bird most seized by the São Paulo Environmental Military Police, which broke up 13 saffron finch fighting rings and seized 4,365 birds in 2020. The department recovered another 16,233 between January 2017 and July 2019. During that same two-and-a-half-year period, it was the most frequently received species by the state’s Wild Animal Recovery Centers (CRAS). While those numbers are high, they’re just a fraction of the saffron finches believed to be trafficked to keep fighting rings running in Brazil.

Common in open and semi-open areas in lowlands in several South American countries, the saffron finch is not a threatened species, making it easy for traffickers to find it in the wild. The Brazilian subspecies, known as Sicalis flaveola, is often run by traffickers from center-west states like Mato Grosso and Mato Grosso do Sul, through to big-city centers like Brasília and São Paulo, and on to the nation’s northeast, known for its coastal beaches and small-town-spotted rural interior, where the majority of fighting rings are located. Some have even reached the United States, and arrests for possession of the birds and fighting rings have been made in several states, including Connecticut and Massachusetts.

Other saffron finch subspecies from across South America are also trafficked into Brazil, where they are hybridized with the local subspecies to make bigger, more aggressive fighters. “It’s a disaster,” says Luís Fábio Silveira, professor at the University of São Paulo’s school of zoology and curator of its Zoology Museum’s ornithological collections. “They’re creating something that doesn’t exist.”

Scientists warn that if those subspecies are apprehended and released in Brazil, severe problems could occur in the local Sicalis flaveola population. Differences in physical characteristics of crossbred saffron finches can also leave them vulnerable in the wild, says Silveira. Their beaks, for instance, might be the wrong size to be able to eat the seeds available in the region where they’ve been released. There’s also a risk of the spread of diseases from other regions or countries. While the effects on the ecosystems they end up calling home could also be substantial, researchers have yet to carry out studies on the subject.

IBAMA’s Environmental Protection Board says that hybrids are kept permanently at its Wild Animal Screening Centers (CETAS) or sent to zoos, while foreign subspecies are repatriated to their country of origin. Finches of the local subspecies are sent to CETAS for care before being released. But while guidelines for the safe reintroduction of wildlife are available, Juliana Machado Ferreira, co-author of Wildlife Trafficking in Brazil and executive director of Freeland Brasil, a nonprofit that focuses on combating illegal wildlife trade, says they aren’t always followed by authorities and hybrids do end up back in the wild.

“We’ve seen seizures of subspecies from other countries then be released into a conservation unit in Brazil,” says Ferreira. “The offspring from breeding between the local species and the invasive species are bigger, giving them a competitive advantage over the local species.”

When shipped by air, saffron finches are stuffed into checked luggage by traffickers and stowed in the plane’s baggage compartment. When transported on land, they travel in vehicles sometimes modified to serve as cages. Other times they’re crammed into slim wooden crates, boxes, bags, or other makeshift carriers.

When they reach their destination, they’re sold for roughly 10 reais ($1.80) in traditional open-air markets and in WhatsApp and Facebook groups created specifically for the illegal bird trade. Some buyers purchase the birds in large quantities, hoping to resell them for double the price or breed them to make bigger, better fighters.

For those involved, the financial benefits of trafficking and running saffron finch fighting rings far outweigh the punishment if they’re caught.

Wildlife protection law in Brazil is extensive, but imprecise. It doesn’t provide a clear definition of wildlife trafficking, and it doesn’t distinguish between professional traffickers, those selling a few animals in a one-off transaction, and those who keep an illegally obtained animal as a pet.

Under Brazil’s Environmental Crimes Law, saffron finch traffickers are likely to be charged a fine that they rarely end up paying and then let go under their own recognizance. The sentence includes up to a year in prison, but they never actually end up behind bars. If they get charged under administrative law, they pay a fine of 500 reais ($91) per bird, since it isn’t a threatened species. If it were, the fine would be upped to 5,000 reais ($915). A champion finch fighter, meanwhile, can go on to be worth up to 40,000 reais ($7,300).

Even reaching the point of arrest can be difficult. According to Vitor Calandrini Araújo, a lieutenant with the São Paulo Environmental Military Police, it’s tips from the public that most often put them on the right track to discovering and dismantling saffron finch fighting rings. They find the birds in deplorable conditions, kept in filthy cages, with old moldy food and injuries left unattended. The fights are vicious, the saffron finches flitting around each other, flapping their wings, and pecking at each other until one rolls to the bottom of the cage, unable to move.

“The bird is small,” Calandrini Araújo says. “The rings happen inside cages. They’re transported inside miniscule carriers. It’s not something that calls attention. It can make it difficult to identify the crime without a tip or complaint.”

Trafficking the tiny songbirds is also a fragmented operation. It isn’t run by one organization, and neither are the fighting rings. Authorities know that when they disband one group, others are still out there. And because of the lenient sentences handed down for these crimes, they often end up arresting the same traffickers and ring runners over and over again.

A 2016 report on wildlife trafficking in Brazil from investigative journalism TV program Fantástico featured one of the country’s most notorious traffickers, Valdivino Honório de Jesus, who illegally trades in birds and iguanas, and was arrested 13 times between 1996 and 2016 and fined 9.116 million reais ($1.67 million), almost none of which he paid. The show followed authorities as they arrested him for the fourteenth time. They found bird carcasses in his freezer and live birds in cages, ready for sale. He was released from custody in less than two hours.

Part of the problem is cultural. Keeping and trading wild animals in Brazil goes as far back as 1500, when the Portuguese arrived to colonize the country. They returned home with what they saw as exotic species, creating a lucrative business that would lead to both the legal and illegal wildlife trades that exist today.

Now, it’s common for Brazilians to keep birds as pets and participate in bird-singing contests. For experts, it’s this legal trade that makes illegal activities like saffron finch trafficking and fighting rings look like lesser crimes, incentivizing others who want to own these birds too and creating a demand in the market.

“We need environmental education,” says Calandrini Araújo, “so that we can, little-by-little, change this culture of keeping wildlife in captivity. Then we might be able to stop these fighting rings too.”

This article by Jill Langlois was first published by E360 Yale on 16 February 2021. Jill Langlois is an independent journalist based in São Paulo, Brazil. She has been reporting from South America since 2010, writing and reporting for publications like National Geographic, The New York Times, Smithsonian Magazine, Al Jazeera, the Los Angeles Times and The Associated Press. Lead Image: A saffron finch at a Peruvian National Forest and Wildlife Service shelter in Lima after being rescued from illegal export. MARIANA BAZO/REUTERS.