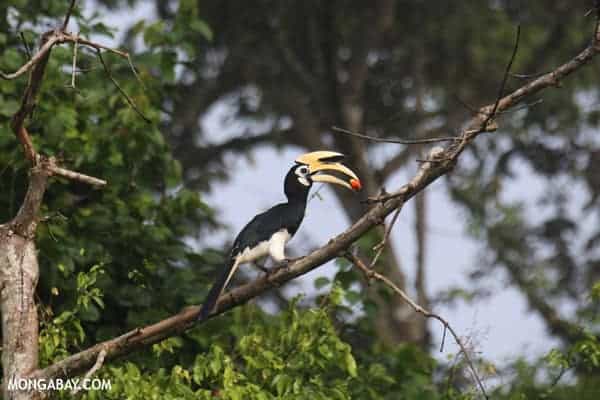 A fruit falls to the floor in a rainforest. It waits. And waits. Inside the fruit is a seed, and like most seeds in tropical forests, this one needs an animal—a good-sized animal—to move it to a new place where it can germinate and grow. But it may be waiting in vain. Hunting and poaching has decimated many mammal and bird populations across the tropics, and according to two new studies the loss of these important seed-disperser are imperiling the very nature of rainforests.

“Animals that eat fruit and disperse seeds are particularly sensitive to hunting. So in hunted forests often you find that there are few animals that can disperse seeds, particularly the largest seeds,” Rhett Harrison with the Chinese Academy of Sciences told mongabay.com. Monitoring a protected forest in Borneo for over 15 years, Harrison and his team have found that over-hunting has led to “pervasive changes” in tree populations “leading to a consistent decline in local tree diversity over time,” according to their study published in Ecology Letters.

Ola Olsson with Lund University found a very similar situation thousands of miles away in Nigeria. Comparing non-hunted sites with hunted sites (where most primates including gorillas had vanished), Olsson and other researchers found that seedling populations—i.e. future trees—were vastly different in a new paper in the Proceedings of the Royal Society B.

“The changed composition among seedlings that we see now will lead to a future tree composition which is different from the present, with fewer large-seeded fruiting trees and more wind dispersed species,” Olsson says.

Although conservationists have long warned about the impacts of deforestation and climate change in the tropics, over-hunting also poses another still largely hidden problem. Scientists are still trying to work out the overall ramifications, but ultimately this “empty forest” trend will lead to less biodiversity and drastically different rainforests even in so-called protected areas.

“Between 1987 and approximately 1999 [Lambir Hills National Park] was defaunated to the extent that all large (over 1 kilogram) animals are either scarce or extirpated,” reads the study.

Unlike temperate forests where most trees depend on wind to move their progeny to a new location, the bulk of tropical trees depend on animals to move their seeds. This means that when prime seed dispersers vanish—such as fruit-eating mammals and birds,—seeds fall from a tree and wait there unmoved. Germination becomes less likely as many seeds see benefits from going through an animals’ guts. In addition, seeds must move to new locations to be competitive in the long-term and the further they can move from the parent tree the better. However, this process is further complicated by some animal species that altogether destroy seeds when they consume them, i.e. seed predators. Teasing out these ecological relationships takes time, which is why Harrison’s long study in Borneo is so important.

“Species by species we examined how [tree] individuals were spaced across the plot and how this changed over time. Obviously if you lose the larger seed dispersers, you would expect seeds to fall nearer the mother tree. However, hunting may also impact seed predators, so it is often difficult to predict how hunting may impact a population,” Harrison explains. “Nevertheless, we were able to show that on-average species with animal dispersed seeds were becoming more clustered over time.”

This clustering makes it difficult for tree species to not only kick-off a new population far away, but also to avoid competing with other members of their species. Like Olsson’s research in Nigeria, Harrison is finding that animal dispersed trees are over time being replaced by those that depend on wind.

“Over time this means heavily hunted forests will become less diverse. However, it has to be stressed that the process is slow. In our study we saw a 2 percent decline in tree diversity over a 15 year period,” Harrison explains.

It may be another continent, but tropical forests in Nigeria are undergoing the same trend as those in Borneo, according to new research. Here, vanishing primates—due to hunting—has left some trees with no-where to go.

“Primates, especially the large apes, are extremely sensitive to hunting, due to their life histories with slow reproductive rates and long life expectancy,” explains Olsson. “So, hunting rapidly decimates the primates, and the primates are the ones to disperse the seeds of many of the trees in the forests.”

Nigeria’s forests are home to a wide variety of primates, including the Nigeria-Cameroon chimpanzee (Pan troglodytes ellioti), the drill (Mandrillus leucophaeus), the putty-nosed monkey (Cercopithecus nictitans), the monamonkey (Cercopithecus mona), the red-eared monkey (Cercopithecus erythrotis), and the Cross River gorilla (Gorilla gorilla diehli), the most endangered ape in Africa. Other likely seed dispersers include rodents, duikers, and red river hogs.

Here, instead of comparing the same forest over 15 years, researchers looked at the difference between forests with primates and those where primates had been largely killed off.

“In the protected forests, where there are still primates, the community of seedlings on the forest floor resembles the community of mature trees in the same forests. Primate dispersed, large seeded species make up the majority of trees in terms of both stems and species,” explains Olsson. “However, in the hunted sites the seedling communities are different. There are much fewer primate dispersed fruiting trees among the seedlings, even though the mature tree composition is the same as in the protected forests.”

Seed dispersal doesn’t just belong to primates, rodents, and birds. One of the most important seed dispersers in the tropics may be the world’s biggest land animal: the elephant. Recent research has highlighted the role of both the Asian and African elephants in dispersing seeds. In fact a study this year found that the decline of the world’s forest elephants (Loxodonta cyclotis) in Gabon was resulting in the decline of over a dozen tree species with a likelihood of eventual local extinction.

“Certain plant species that co-evolved with megafauna such as elephants have developed fruits and seeds adapted to these large seed dispersal vectors,” David Beaune with the Max Planck Institute for Evolutionary Anthropology told mongabay.com in March.”If we can’t replace elephants, then the reproduction of these plant species is hugely compromised.”

But the forest elephant is rapidly vanishing to poachers, who are bent on supplying illegal ivory to East Asia. A recent study in PLoS ONE found that 62 percent of forest elephants have been slaughtered by poachers in just ten years.

While forest elephants should be present in Nigeria’s forests as well, Olsson says they “are really scarce.”

Though less research has been done on Asian elephants (Elephas maximus), seed dispersal experts believe they also play an oversized role. Rhinos may be major seed dispersers as well, but they have vanished from most tropical forests due to a combination of relentless poaching and habitat loss. Even as forests are emptied of medium-sized mammals and birds, many were first emptied of megafauna.

Given what’s at stake—the extinction of rainforest trees and a complete re-shuffling of tropical forests with unknown consequences—how do we stop overhunting and allow important seed-dispersal species to recover?

Olsson says that in Nigeria regional population growth is playing “an enormous role” in the country’s environmental issues.

“More people in areas like these means higher pressure on the land and the remaining intact and protected forests,” he says. “Unfortunately, that insight does not suggest a simple solution.”

According to 2012 CIA World Factbook Data, Nigeria is 22nd in the world for population growth out of 231 countries and territories with a growth rate of 2.55 percent annually. Experts on population growth have long advocated education and rights for women as well as access to contraceptives as some of the best methods to stem overpopulation.

“The only simple answer I have is that the protected areas need proper protection. All of our sites are protected, in one or the other way, but hunting still takes place in parts of them,” says Olsson. “Other than that the answer must be as complex as the question.”

According to Olsson the problem in Nigeria is a mix of poverty and culture.

“The hunters are poor people with short access to protein, and have little options,” he says. “However, it also has to do with attitudes and possibilities to sell the meat on a market. We have an ongoing project where we survey the livelihoods of people in villages around the forest, and interview them about their household economies, diet and attitudes. We hope to be able to report on that project within a few months.”

Some programs have tried to stem overhunting by focusing on providing domestic protein sources, such as chickens, with varying success. In some parts of the world the bushmeat trade has moved beyond subsistence in the forest to an urban market, which sells wild meat at higher prices than domestic. People may purchase it for the novelty of the meat, as a status symbol, or because, for rural refugees, the taste reminds them of home. Like so many environmental problems, the bushmeat trade has become a complex mix of cultural attitudes and local economics.

But the problem has become so large as to strip even some world-class protected areas of their animals. Tourists may travel thousands of miles to see a rainforest only to find it practically empty. Meanwhile, the hunted animals are taking whole tree species with them.

“Obviously we have to do a better job at protecting tropical forests against hunting. Many protected areas in the tropics have little or no on-the-ground enforcement, and this has to change,” says Harrison. “It is also probably going to be necessary to reintroduce species in many places, especially species that are good seed dispersers.”

For communities around Lambir National Park that may require a cultural shift, says Harrison.

“Some communities just love to hunt and will continue to do so even when species become rare.”