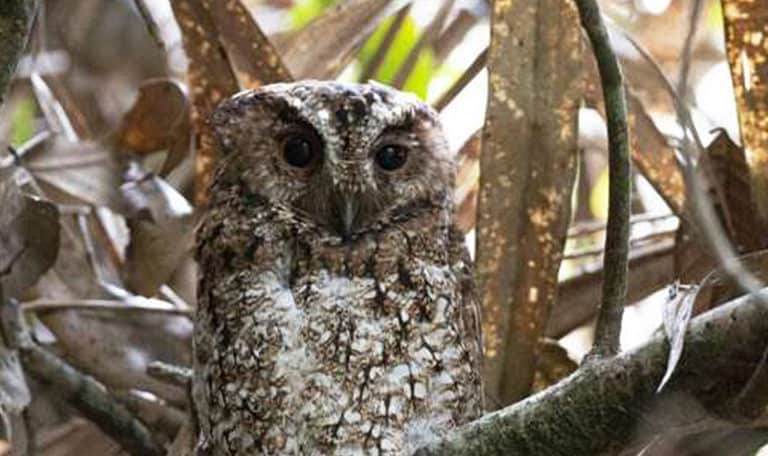 The Bornean subspecies of the Rajah scops-owl (Otus brookii) was first described from the montane forests of the Malaysian state of Sabah in 1892. Since then, however, its whereabouts have been a mystery. It was not until 2016 that a group of researchers documented the first sighting of a live individual in more than a century, and due to its rarity, scientists believe it could be its own species. The findings were reported April 28 in The Wilson Journal of Ornithology.

That May 4, 2016, rediscovery of the Bornean Rajah scops-owl (O. b. brookii) was part of a 10-year study of avian life-history evolution on Mount Kinabalu in Borneo. The project, led by Thomas E. Martin, a wildlife biologist with the Montana Cooperative Wildlife Research Unit at the University of Montana, required intensively searching for nests and gathering ecological information about birds. After seven years of working up to 10 hours per day, six days a week, the team accidentally came across O. b. brookii.

Andy Boyce, an avian ecologist at the Smithsonian Conservation Biology Institute’s (SCBI) Conservation Ecology Center, happened to be working at a lab in Kinabalu National Park when he was notified by technician Keegan Tranquillo about the sighting of a bird that differed in appearance from the more common mountain scops-owl (O. spilocephalus luciae).

“When I got the call about a ‘weird owl,’ I was in a laboratory at the park measuring metabolic rates and cold tolerance for some common species as part of my Ph.D. work,” Boyce told Mongabay.

When he got to the roosting location, he knew they had something special. “I am fascinated by ornithological minutiae and trivia like this lost owl. That information was resting comfortably way in the back of my brain for several years and I was happy it was there when this individual popped up,” Boyce added.

The encounter led to the first in-situ photo of the Bornean Rajah scops-owl. “It was a pretty rapid progression of emotions when I first saw the owl — absolute shock and excitement that we’d found this mythical bird, then pure anxiety that I had to document it as fast as I could,” Boyce said in a statement.

The Rajah scops-owl is a small bird weighing 100 grams (3.5 ounces) and measuring up to 24 centimeters (9 inches) in length. It has a striking appearance with rufous plumage, black streaks on its chest, characteristic ear tufts with white inner sides, and piercing yellow eyes. Almost everything that is known about its ecology is derived from the Sumatran subspecies (O. b. solokensis).

Given that the islands of Borneo and Sumatra have been prone to speciation events, and that owls in the genus Otus have shown rapid divergence following geographic isolation, researchers say the Bornean subspecies is so rare it could be a whole new species on its own.

The conservation status of the Rajah scops-owl is currently listed as being of least concern on the IUCN Red List, but the forests it calls home are under immense pressure from deforestation and climate change, which threaten to shrink the owl’s habitat and shift its range upward. If O. b. brookii and O. b. solokensis are in fact separate island-endemic species, the finding could help funnel conservation efforts toward protecting the remaining habitats on each island. To resolve the taxonomic relationship between both subspecies, researchers recommend conducting night surveys in potential habitat and collecting blood or feather samples if a sighting occurs.

The encounter with the elusive owl lasted two hours before it vanished into the forest once again. There have been no sightings since.

This article by Romina Castagnino was first published on Mongabay.com on 13 May 2021. Lead Image: First photo of a Bornean Rajah scops-owl (O. b. brookii). “Being able to document this vanished bird was really an incredibly exciting moment, and not something I ever really dreamed of because my work wasn’t focused on exploring remote and little-known places, or purposely searching out these forgotten species,” Boyce told Mongabay. Image by Andy Boyce.