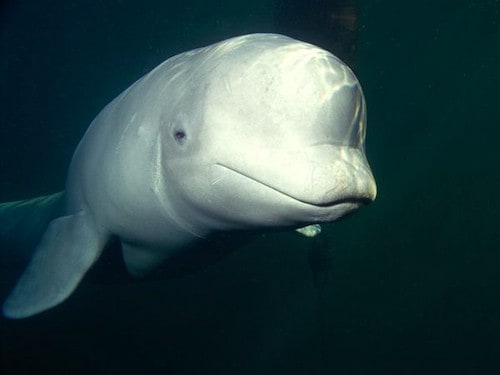 Earlier this year the Georgia Aquarium announced that its beluga Qinu was pregnant with her first calf, and last week she started going into labor. Tragically, just a day later the aquarium followed up with news that the calf had died before even being born.

The Georgia Aquarium said in an update, “The position and shape of the calf prevented the delivery and it was determined the calf had died before it had a chance to be born. Our veterinary and animal care teams intervened for the safety of Qinu and worked around-the-clock to carefully remove the calf. Our teams have continued to care for Qinu throughout the morning as she recovers.”

The latest tragedy follows a string of heartbreaking losses of both calves and adults for captive belugas that point to an urgent need to end their confinement. Not only does captivity cause harm to individuals who are doomed to lives in tanks, the industry continues to pose a threat to those in the wild.

Unfortunately, with a low success rate for breeding and a captive population that won’t sustain itself without new babies, aquariums are going to have to look to the wild to keep their exhibits open and that’s just what the Georgia Aquarium had been attempting to do. After losing a years-long battle to import 18-wild caught belugas from Russia, last year it finally announced that it would stop all attempts to bring in dolphins and belugas from the wild.

The news was welcomed at the time, but despite the growing controversy and opposition that surrounds keeping cetaceans in captivity, the Georgia Aquarium has remained determined to keep its beluga exhibit going, and has been busy swapping them with other facilities in an apparently futile attempt to get them to breed.

Since Maris died suddenly in 2015, shortly after losing a second calf of her own, leaving just Grayson and Qinu, the aquarium has brought in Aurek and Maple from Seaworld Orlando. They have also taken in Nunavik from the Shedd Aquarium and sent Grayson to Shedd. Earlier this year Aurek was also moved to Shedd. Now Maple, Qinu and Nunavik remain.

Hopefully this latest tragedy will encourage more people to learn about the dark side of beluga captivity and continued public pressure will lead to the aquarium accepting the reality that keeping them captive isn’t the way forward when it comes to saving this precious species.

You can help by avoiding facilities that keep captive whales and dolphins, and supporting organizations that are working to protect them in the wild where they belong. True conservation efforts aren’t focused on sustaining captive populations, they’re devoted to habitat protection, and ensuring no more suffer at either an individual or population level as a result of human activities.

There are few things in life as beautiful as hundreds of beluga whales swimming in shallow water estuaries with their newborn calves. We are here to celebrate the recent creation of the Lancaster Sound / Tallurutiup Imanga Marine Conservation Area. These estuaries are where 20% of the world's belugas migrate through and use as nurseries. Thank you @justinpjtrudeau for helping protect these important ecosystems. @sea_legacy @cristinamittermeier #TurningTheTide with @sea_legacy #mpa #whale #ocean #nature #conserve #protect #aerial #underwater #photography #naturephotography #ocean #polar #baby #beluga #whale

You can also help by signing and sharing the petition asking the Georgia Aquarium to phase out its current beluga exhibit for good.