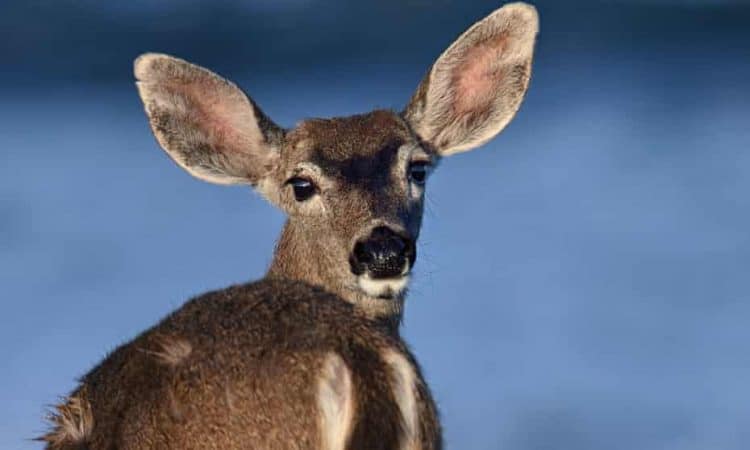 As America’s pandemic – for now – seems to be moving into a new phase with national rates in decline from the September peak and vaccines rolling out to children, a new worry has appeared on the horizon: wildlife passing on the virus.

A new study shows that deer can catch the coronavirus from people and give it to other deer in overwhelming numbers, the first evidence of animals transmitting the virus in the wild. Similar spillover and transmission could be occurring in certain animal populations around the world, with troubling implications for eradicating the virus and potentially even for the emergence of new variants.

One-third of Iowa deer sampled over nine months had active infections, with a peak of 80% testing positive between November and January, according to a preprint study that has not yet been peer-reviewed or published.

It builds on previous findings that one-third of deer in other US states were exposed to the virus and developed antibodies, but it differs in showing high rates of active infections, which last for a much narrower window of time.

The virus very likely spilled over from humans to deer through several different interactions, and then it probably spread to other deer, according to the analysis.

Nearly everything about their study shocked the scientists. They knew deer could be infected with the coronavirus. But they were stunned by the numbers – four out of five deer tested positive at the highest peak – as well as high viral loads that were “truly gobsmacking”, Suresh Kuchipudi, clinical professor of virology at Penn State and coauthor of the study, told the Guardian. They were also surprised by the fairly clear links in the genetic analysis connecting human transmission to the animals and then the rapid transmission to other deer.

“If there is spillover into free-living deer, it will rip through like wildfire,” said Vivek Kapur, professor of microbiology at Penn State and coauthor of the study. This analysis was limited to Iowa, but the researchers believe widespread infection is just as likely among deer in other states.

Deer, which are abundant in North America and a popular target for hunters, are highly susceptible to SARS-CoV-2, and they may contract it by grazing on discarded food, drinking contaminated wastewater, or nosing through undergrowth where a person has spit or relieved themselves.

“If they come in contact with the virus from any means of source, they are going to be infected,” Kuchipudi said. “It is highly likely that the animal will pick up the infection even though face-to-face interaction never happened.”

These results have implications for other wildlife as well. It is possible certain other animals are also contracting and spreading the coronavirus around the world, which would make it difficult to eradicate the virus and to prevent mutations that could lead to new variants.

Around the world, SARS-CoV-2 has been reported in cats, dogs, ferrets, minks, lions, tigers, pumas and gorillas. Hyenas at the Denver zoo recently tested positive, the first confirmed cases in those animals.

In August 2020, an outbreak at a mink farm in Utah led investigators to sample wild mink nearby – and they found antibodies and active infections in some of the wild animals.

In November 2020, Denmark killed 17 million mink after the virus jumped from people to farmed mink and back to people again – the only documented case of animals passing the coronavirus back to people. The virus mutated, but none of the changes were dangerous.

Another coronavirus, which now causes mild cold symptoms, may have driven the 1889 pandemic that claimed 1 million lives – and it probably spilled over from cattle. Notably, cattle have also passed coronaviruses to deer, prompting concerns that SARS-CoV-2 could similarly move between deer, cattle and people to possibly catastrophic effect.

A virus that can circulate among animals as well as people is much harder to eradicate.

“It’s much harder to get rid of a virus if it has a reservoir,” Stanley Perlman, professor of microbiology and immunology at the University of Iowa, said. As people build immunity to viruses, fatalities begin to drop, but the viruses don’t go anywhere – the flu virus behind the 1918 pandemic still circulates today.

“It’s always gonna be with us. What form it’s in, I don’t know – hopefully, it’ll be an attenuated, weakened form,” Perlman said.

This cross-species contagion can result in mutations – and it’s hard to know whether these variations will be milder or more severe. “So far, there’s just been no evidence” of spillback into humans from animals, Perlman said.

But “the more any virus circulates and moves around, the more opportunity it has to mutate,” Ellen Carlin, assistant research professor at Georgetown University’s Center for Global Health Science and Security, told the Guardian.

“Just because a virus mutates, that doesn’t mean it’s a problematic mutation for human or animal health. But it could be, so we need to watch for that,” Carlin said. “Anything is possible at this point.”

The emerging evidence on animal reservoirs increasingly points to the need for several long-term efforts to stem the virus’s spread, Carlin said. Vaccines for humans, for instance, can only go so far in preventing cases when a virus is circulating among animals.

“We need to do a better job detecting these viruses in animals before they reach people, and we need to be doing a better job preventing spillover before it happens. And that requires addressing really tough challenges, like land use change and deforestation and climate change and urbanization,” Carlin said. It also requires investing in health care and monitoring systems, experts say.

The study in deer is “a really hard reminder that we need to do a much better job funding wildlife research, not just for SARS-CoV-2 but for other infectious diseases,” Carlin said. “We have scientists who are more than capable of going out there and figuring out what’s going on with SARS-CoV-2, but there’s no real system in place to do that on a national level.”

More research would also reveal whether or how animals spread the virus across species, including to people.

If research like this hadn’t been conducted, Kuchipudi said, the outbreaks among Iowa deer would have gone undetected. “There was a silent epidemic, if you will, happening in the deer,” he said. “We would have never known unless we tested the samples.”

This article by Melody Schreiber was first published by The Guardian on 11 November 2021. Lead Image: One-third of Iowa deer sampled over nine months had active infections, according to a preprint study. Photograph: Rory Merry/ZUMA Wire/REX/Shutterstock.