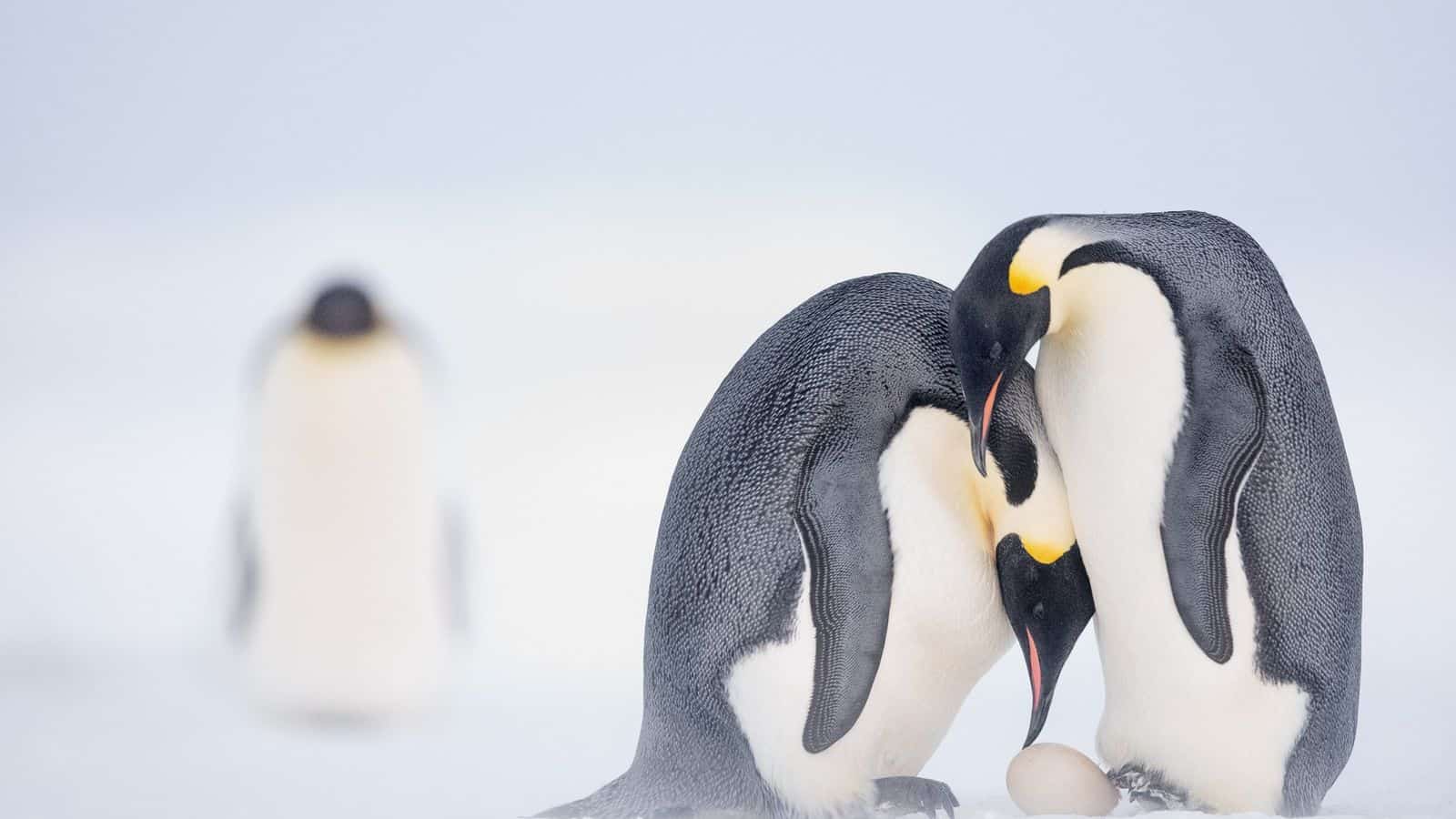 “Then all of a sudden, you hear the first calls,” photographer Stefan Christmann says. That’s when it really hits him: “Wow. The birds are coming back.”

It’s late March in Atka Bay, in Antarctica’s Queen Maud Land, nearly 2,700 miles southwest of the southern tip of Africa. Christmann has been waiting more than two months for theemperor penguins—the biggest of all penguins, standing about four feet tall and weighing up to nearly 90 pounds—to return from foraging at sea.

His plan is to stay with the Atka Bay colony’s roughly 10,000 penguins through the winter, for the second time. He spent the winter here five years ago and has come back to complete his chronicling of the emperor’s breeding cycle—something few, if any, wildlife photographers have done. With temperatures falling to at least 50 degrees below zero Fahrenheit (45 degrees below zero Celsius) and shrieking blizzards that cut visibility to a few feet, the Antarctic winter is not for the faint of heart—especially during July and August, its coldest months.

“To be quite honest, you get used to it after a while,” Christmann tells me matter-of-factly.

What the emperor penguins won’t easily get used to is diminishing—and possibly disappearing—sea ice, which provides a stable breeding platform and base from which they can hunt for food in surrounding waters.

Despite being superb swimmers, adult emperors in the 54 colonies around Antarctica—some 256,500 breeding pairs—must nurture their chicks out of water on the sea ice before spring comes and the ice melts. Antarctic sea ice is highly variable, but five years ago it suddenly declined, with record shrinkage in 2017, according to a study published last year in theProceedings of the National Academy of Sciences of the United States.

Sea ice may now be recovering, but it still remains below the long-term average, and climate models predict continued significant losses by century’s end unless urgent action is taken against climate change.

“Under a business-as-usual scenario, emperor penguins are marching towards extinction,” says Stéphanie Jenouvrier, a seabird biologist at Woods Hole Oceanographic Institution in Massachusetts. Her team’s research indicates that if carbon emissions remain unchecked, 80 percent of the emperor colonies could be gone by 2100, leaving little hope for the species’ survival. Average global temperature is on track to increase by three to five degrees Celsius (5.4 to nine degrees Fahrenheit) by then, but if the rise can be kept below 1.5 degrees Celsius (2.7 degrees Fahrenheit), Jenouvrier says, perhaps nearly 20 percent of colonies would be lost, while the Ross Sea and Weddell Sea populations, potential emperor penguin refuges because of more favorable sea ice conditions, would increase slightly.

With the sea platform in place and the Atka Bay penguins settled in, Christmann sets about capturing the scene as they begin a brand-new turn of their life cycle. An elegant courtship unfolds as penguins pick that year’s partner. A brief and awkward copulation follows, as the males do their best not to fall off.

Afterward, the penguin partners stick together, mirroring each other’s movements. Their close bonds will help ensure their chick’s survival—it’s the only one they’ll have that season. One day Christmann notices a pair peering at a snowball carefully balanced on the female’s feet. He guesses they’re a first-time couple practicing their egg-balancing skills.

By the end of May, the first eggs appear, one per female. Laying has come at a physical cost, so the hungry female carefully passes her egg to her mate and gets ready to leave. The partners will test the strength of their bonds as the females return to sea to feed.

For the males left behind, winter closes in. In 100-mile-an-hour winds and plummeting temperatures, the birds huddle to share body heat. Such cooperation keeps the dads and their precious eggs alive, as do the males’ body reserves—there’s nothing to eat, and they’ll lose almost half their weight before the females return. On the coldest days the penguins fall silent, saving as much energy as possible. All Christmann hears is the eerie sound of their feet scraping over the ice.

Through the six-month-long winter, Christmann and 11 others are the only humans in this part of Antarctica, huddling themselves in a small German research station perched on the ice shelf above Atka Bay. In all but the worst of storms, when the humans stay inside, it’s a snowmobile ride down the steep escarpment and onto the sea ice to be with the penguins.

In late July the polar night ends, and soon the rising sun greets new voices in the colony. If their mothers don’t get back in time with food for their young, the chicks get their first meal from their father—gooey milk from his esophagus. But after enduring the winter, not all the males have been successful. Christmann sees one picking up a dead, frozen chick and balancing it on his feet. “He took the chick and walked towards the colony, acting as if everything was normal.” It was “heartbreaking,” Christmann says.

Females return just when their starving partners need them most. Pairs reinforce their bonds. Mothers see their chicks for the first time and take over feeding duties. For months, parents form a tag team, taking turns to fetch food for the growing chicks. Around September, both parents must go fishing together to satisfy ever hungrier mouths, leaving the chicks to hang out in crèches.

The youngsters learn to huddle, not always neatly. A few nestle together, then others race up and slam into the pile. As the huddle grows, latecomers try pushing in—“right in the warm portion of the huddle,” Christmann says.

Sometimes lone parents stay behind and watch over the crèches. Christmann sees an adult with two chicks. Although only one belongs to the caretaker, the bird reaches down and feeds them both. An accident? Maybe not. Adult emperors frequently perform a ritual of lifting their brood pouch, a feathery flap of skin, to show others their newborn. It’s unproven, but Christmann thinks it’s possible that the parents do this to form close bonds, becoming guardians to each other’s chicks and helping out with childcare.

Toward year’s end, the chicks are nearly as tall as their parents, but they aren’t out of danger. Before the sea ice melts, the chicks must swap their gray down for waterproof, adult feathers; otherwise, they’ll drown. This happened in 2016 at the Halley colony, when a storm broke up the ice before October and the chicks were still in their crèche period. Since then the ice hasn’t been stable enough to support adults, leading to almost complete breeding failure, with no chicks successfully reared. That colony—previously Antarctica’s second largest—is now mostly abandoned. The storm coincided with the strongest El Niño event in 60 years, the kind of extreme weather pattern that’s expected to become more frequent. Counts of penguins in satellite images are under way to gauge how much the birds have been affected by the recent changes in sea ice losses around Antarctica. The results likely will be a warning sign for the future of the species.

Back at Atka Bay, the sea ice begins melting at the end of December, earlier than expected, and Christmann sees molting adults and chicks clambering to safety atop the higher ice shelf—an extension of the much thicker terrestrial ice—using a pile of drifted snow as a ramp.

A month later, he watches the last full-grown chicks leap from the shelf some 15 to 30 feet into the sea. “It looks spectacular,” he says.

Elsewhere in Antarctica, emperor penguin colonies won’t have this option to survive the early disintegration of their sea ice haven. Many ice shelves are simply too high for waddling penguins to climb. Even if they make it up, the ice is scarred with deadly crevasses, and there’s no shelter from the punishing winds. “I’m worried about them becoming the new polar bears,” Christmann says, referencing those famous denizens of fast-shrinking Arctic sea ice.

It was never going to be easy for Christmann, spending a year on the frozen continent, leaving his loved ones behind, but the emperor penguins kept him going. “There’s this bird that cannot fly, that walks funny, that always looks grumpy, and this bird shows you how it’s done,” he says. “They are able to live through the harshest of conditions, and it would be us who send them over the edge. I would feel very, very sad about that.”

This article  was written by Helen Scales, who divides her time between Cambridge, England, and the French coast. She’s written five books about the oceans. Stefan Christmann won the 2019 Wildlife Photographer Portfolio of the Year Award for his work on emperor penguins.  The article was first published by National Geographic on 14 May 2020.