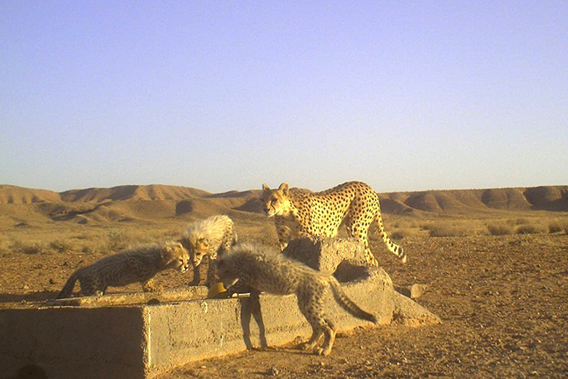 Cheetahs (Acinonyx jubatus) are unique among large cats. They have a highly specialized body, a mild temperament, and are the fastest living animals on land. Acinonyx jubatus venaticus, the Asiatic subspecies, is unique among cheetahs and the only member of five currently living subspecies to occur outside of Africa. Listed as Critically Endangered on the IUCN Red List—with a population of between 70 and 100 individuals—the Asiatic cheetah is one of the rarest felines on the planet. But new proposed road through one of its last habitat strongholds may threaten the cat even further.

The Asiatic cheetah’s historic range encompassed much of central-southern Asia; the current remaining population has been relegated to the desert region of central Iran. Instead of roaming savannahs and prairies, Asiatic cheetahs inhabit steppe and semi-desert areas. This change in habitat brought about changes in life history traits as well, most notably in diet. Unlike the typical smorgasbord of grassland ungulates on the plains of Africa, Asiatic cheetahs have an altered menu consisting of wild sheep, wild goats, ibex, hares, and Jebeer gazelles.

Though its African cousin has been studied in-depth, little is known about the ecology of the Asiatic cheetah. The current population of less than 100 animals is a drastic decrease from the estimated 200-300 animals in the late 1970s. The remaining animals are mostly confined to protected habitats in wildlife refuges and sanctuaries. Some skeptics claim that they are as good as extinct, while optimists believe that these unique animals have a fair chance of survival.

In Iran, threats to the cheetah population include desertification, human-induced modification of their habitat, agricultural pressure, poaching, and, most critically, a declining prey base. With less available prey and less suitable habitat, Asiatic cheetahs are in serious trouble; construction of a new road will further compound the problem.

The Bafq Protected area, a 250,000 hectare preserve in the eastern Yazd province, is an important habitat sanctuary for Asiatic cheetahs. Unfortunately for cheetahs, this habitat gem is under threat. Government officials have proclaimed that since few cheetahs reside in Bafq, they do not warrant special protection and the area is not an area of high environmental priority. Estimates on the number of individuals inhabiting the preserve vary, but it is generally accepted that Bafq boasts the highest density of cheetahs anywhere in the country.

The aim of the road is to shorten the distance between two villages and the main city, which lies on the other side of the mountains. The proposed road cuts through an expanse of the preserve where cheetahs are known to frequent as well as breeding populations of endangered Persian leopards (Panthera pardus ciscaucasica), caracals (Caracal caracal), and the Near Threatened Pallas’s cat (Otocolobus manul). Opponents of the road argue that its construction is not a significant benefit as it would pass through a steep, rugged area; fuel costs to traverse it would be great, and, all in all, the route is not much shorter than the current one.

Cheetahs roam expansive distances in search of prey, so encountering a road is inevitable, even in a protected area. Between 2005 and 2011, 40% of known, human-induced cheetah deaths in Iran were caused by vehicle collisions.

Local conservation groups including the Iranian Cheetah Society (ICS) and the Conservation of Asiatic Cheetah Project are in arrears with developers (CACP). The proposed project has attracted a plethora of media attention and local communities and authorities are in the crux of negotiations. Local conservationists are attempting to work with proponents of the road to come up with alternative solutions. Mohammed Farhadinia of the ICS tells Mongabay that an additional challenge for conservation organizations is to procure the resources and local support to enact these alternatives.

The construction of a road through Bafq not only introduces a direct risk to cheetahs by increasing the probability of cheetah-vehicle collisions, but also increases accessibility to poachers, and reduces habitat connectivity and could isolate breeding individuals. This is of particular concern since the Bafq Preserve houses both the greatest density of cheetahs in the region and is a critical source of dispersing individuals.

Farhadinia tells mongabay.com that the proposed road is set to be constructed through an area of high habitat quality, so, “less suitable habitats will be available for cheetahs to roam.” This could alter spatial occurrence of cheetahs and may reduce numbers as well as occupancy.

African cheetahs suffer from low genetic diversity as a result of a population bottleneck after the last Ice Age. With too few animals breeding and contributing to the gene pool, the species is no longer genetically robust. Evolutionarily, Asiatic cheetahs separated from their African cousins around 30-60,000 years ago. While Asiatic cheetahs did not experience the population bottleneck that African cheetahs did, their population is small, which means that there is relatively low genetic mixing and animals are closely related to one another, so limited genetic diversity remains a pressing concern. With fewer than 100 individuals in the population, conservation is critical to ensure the survival of this subspecies.

Cheetah conservation in Asia has strong supporters. Conservationists are working not only to protect the current population but also to re-introduce animals to their native range throughout the region.

There has been contention as to how genetically similar African and Asiatic cheetahs truly are and whether African cheetahs can be used in re-introduction programs in Asia. Dr. Pamela Burger, a researcher at the University of Veterinary Medicine in Vienna, has conducted studies to delve into the DNA and recent analysis has confirmed that the subspecies are quite different from each other.

“The implications of our discovery are that the confirmation of the subspecies is a basis for future conservation management,” she says. Protecting Iranian cheetahs will conserve the gene pool and preserve the biodiversity for future re-introduction programs. Local conservationists are hopeful that this new-found information will garner additional support for conserving Asiatic cheetahs.

Alireza Jourabchain, the Director of the CACAP, is optimistic about Asiatic cheetah conservation in the region thus far, but admits that much is to be done.

“We have been successful in stabilizing numbers in Iran but we still have a long way to go before we can consider this unique subspecies secure.”