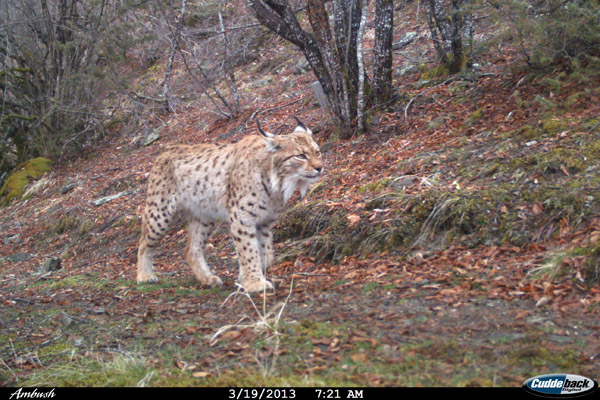 They still call the Balkans “the Powder Keg of Europe.” For good reason too: bloody ethnic and religious conflicts in the past decades have left hundreds of thousands dead and millions displaced. As recently as 2001, the army in Macedonia was fighting with ethnic Albanians, many of them from Kosovo.

However, in the past seven years a rare and charismatic wild cat – the Balkan lynx (Lynx lynx balcanicus) – is serving to unify countries with troubled historical and political relations. Albania, Macedonia, Kosovo and Montenegro are collaborating on a joint conservation strategy for the Critically Endangered animal.

Lynx, like their larger distant cousins the cougars, like to roam and hunt in huge areas (up to 200 square miles). They do not know or respect political borders. Each country is proud of having this species on its territory. However, to ensure lynx’s long-term survival, each has no choice but to cooperate with the neighboring countries.

“For anyone, who knows some basic Balkan history, this is quite amazing,” says Aleksandër Trajçe, one of the Project Managers for the Balkan Lynx Recovery Program.

Lynx on the Balkans

A genetically distinct subspecies of the Eurasian lynx, the Balkan lynx is critically endangered with less than 60 individuals surviving in the wild. It is only known to roam the forests of two Balkan countries: Macedonia and Albania. Researchers believe that there might be some lynx also in Kosovo and Montenegro.

Ironically, the survival of the lynx is likely due to the turbulent political history of the region. Until the 80s, the communist central government of Yugoslavia exercised tight control over hunting and forestry, ensuring there was almost no illegal logging or poaching. In the 90s, the border regions between Albania and ex-Yugoslavia were areas of restricted access for people due to strict border controls and the conflicting relationship between the two countries. This inadvertently protected the natural habitat of the elusive cats and allowed the Balkan lynx to survive in the southwest part of the peninsula even when it went extinct everywhere else on the Balkans.

In today’s peaceful Balkans, the few remaining lynx in the wild face three major threats, all of them coming from humans: illegal killing of lynx, poaching their prey and destruction of their habitat. Illegal deforestation and uncontrolled hunting of the lynx’ typical prey (roe deer, chamois and brown hare) indirectly reduce their chances of survival. When direct killing of lynx is added, the elusive cats become even more threatened. In such a small population even the loss of a single individual can cause a huge negative impact for the future of the entire species.

A key conservation strategy advocated by the Balkan Lynx Recovery Program is the creation and expansion of national parks and protected territories. As a direct result of the rediscovery of the Balkan lynx, Albania has designated two brand new nature reserves spanning 3% of the nation’s territory: Shebenik-Jabllanica National Park in 2008 and Korab-Koritnik Nature Park in 2011. Two more areas in Macedonia are on the way to receive protection for being part of the Balkan lynx habitat: Jablanica and Shara mountain. Fortunately, these areas also boast an incredibly rich diversity of many other species (including bears, wolves, and endemic plants), which by extension are also granted safe havens.
To find out how to protect the species, researchers first need to learn more about their life. For that purpose, three lynx have been radio-collared and their whereabouts are constantly followed. Here researchers just captured Riste and are fitting him with the collar.

Another reason why lynx have survived in this corner of Europe is because locals in the mountains have preserved their traditional lifestyle: living in small villages, herding cattle with guard dogs and protecting them from predators at night. The Balkan Lynx Recovery Program has already distributed micro-grants worth 100,000 Euro to the local communities in Albania and Macedonia as an incentive to preserve and engage in traditional rural livelihoods. The money is used to encourage the sustainable use of forests, collection of medicinal plants, traditional bee keeping and agriculture, breeding guard dogs, promotion of eco-tourism etc. All these mini-projects allow locals to maintain their nature-friendly lifestyle by provide them an extra source of income.

Balkan lynx conservationists also collaborate with hunters through joint workshops and education campaigns. Indeed, hunters have a genuine interest in healthy wildlife populations and therefore can play quite a positive role in maintaining high prey populations that could benefit lynx as well.

“Ninety percent of the hunters do not shoot lynx,” says Panajot Chorovski from Kicevo, Macedonia. He explains that in his 40 years of hunting experience he has only seen lynx two or three times and it never occurred to him to kill it. “They are important for the rest of the animals,” Chorovski says. “If there is a sick deer, the lynx will attack it and this is good for the entire herd.”

“Of course, we need to distinguish honest hunters from dishonest ones – poachers,” says Trajçe. According to the scientist, legal hunters are a valuable partner for the conservation of Balkan lynx as they upkeep the regulations, respect wildlife and do not pose a threat to the Balkan lynx.

Poachers, on the other hand, are the real problem and dealing with them is quite difficult. They can be a direct threat to the lynx by shooting them, or indirect, by depleting their prey species with reckless, illegal and unsustainable hunting.

“Still, I am very much an optimist about the future of the Balkan lynx. When we started a few years ago, we didn’t even know if they still existed. We’ve come a long way since then,” says Trajçe. “If we just keep going this way with dedication and passion, I believe we can save the species.”

Europe already has one successful conservation story of a lynx species: the Iberian lynx (Lynx pardinus) population tripled in the last decade to more than 300 individuals at present. Let us wish similar fate to the Balkan lynx.