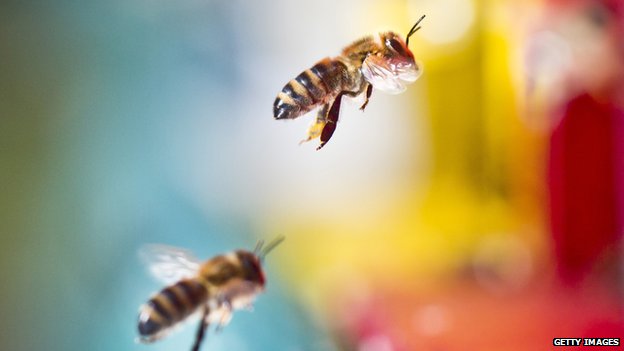 The UK government should suspend the use of a number of pesticides linked to the deaths of bees, a committee of MPs has said. Members of the Commons Environmental Audit Committee are calling for a moratorium on the use of sprays containing neonicotinoids.

Britain has refused to back an EU ban on these chemicals saying their impact on bees is unclear. But MPs say this is an “extraordinarily complacent” approach.

Wild species such as honey bees are said by researchers to be responsible for pollinating around one-third of the world’s crop production.

In their report, MPs say that two-thirds of these species have suffered population declines in the UK.

They argue that a “growing body of peer-reviewed research” points the finger at a group of pesticides called neonicotinoids.

“So we are calling for a moratorium on pesticides linked to bee decline to be introduced by 1 January next year.”

Following on from research published in January by the European Food Safety Authority that suggested these chemicals posed an “unacceptable” threat to bees, the European Commission proposed that neonicotinoid sprays be restricted to crops not attractive to pollinators.

There are already some restrictions in place in France, Germany, Italy and Slovenia. But the idea of a two-year ban did not attract enough support after the UK and Germany both abstained.

Joan Walley says the UK government’s approach to the issue is “extraordinarily complacent”.

“If farmers had to pollinate fruit and vegetables without the help of insects it would costs hundreds of millions of pounds and we would all be stung by rising food prices,” she added.

But the Department for Environment, Food and Rural Affairs (Defra) says that a ban is not justified at present.

“Neonicotinoids will kill bees, let me be absolutely clear about that. It is what numbers do they kill and whether it affects populations – the question is whether banning them in any way would be proportional and at the moment the balance of evidence suggests it wouldn’t be,” he said.

There have been a number of studies showing that the chemicals, made by Bayer and Syngenta, do have negative impacts on both honey and bumblebees.

One study suggested that neonicotinoids affected the abilities of hives to produce queen bees. More recent research indicated that the pesticides damaged their brains.

But Defra argues that these studies were mainly conducted in the laboratory and do not accurately reflect field conditions.

It has published its own work showing that in the field, these chemicals had little effect on bee health, although Defra acknowledges the study lacks statistical power.

They are also calling on the European Commission to agree to a major new field study that would settle the debate.

“That will allow informed decision-making, rather than rushing into a knee-jerk ban based on inconclusive studies,” said a Defra spokesman.

Dr Ian Boyd says that despite being used for 20 years, there has been no satisfactory answer to the key question: what effect are these chemicals having on pollinators in the field?

Given the finely balanced state of the science he says that other factors such as the costs to farmers have to be considered in the decision to keep using these pesticides.

“It is a very difficult analysis to do, we really don’t have full data – but it does suggest that the cost-benefit trade-off at the moment is weighted to retaining neonicotinoids because if you just cost this in financial terms then you move in the direction of having a significant financial cost to take them out of the system,” he said.

But the Commons Environmental Audit Commission rejects this approach, saying that “economic considerations should not form part of environmental risk management decision-making”.

The committee also asks for more openness from the chemical manufacturers who should publish their own research on the safety of these products.

This seems to be one thing on which Defra and the committee agree.

“I personally believe that all those data should be open access; I think that everyone should be able to see them,” said Dr Boyd.

“There are issues around confidentiality but I don’t think any of those are insurmountable,” he added.

Pesticide manufacturer Bayer said it “strongly disagrees” with the idea of a two-year moratorium.

With fellow producer, Syngenta, it has produced its own action plan on how to protect bee health.

“There has been a long history of the safe use of neonicotinoid insecticides and it is clear that when they are used responsibly and properly, any impact on bees is negligible,” said Utz Klages of Bayer.

“This has already been confirmed by the competent EU and member-state authorities in their market authorisation assessments, based on the extensive safety data that had previously been submitted and proven in many monitoring studies.”

The committee of MPs says the government’s lack of action is in marked contrast to the efforts of the UK’s largest garden chains.

The report has been welcomed by many campaigners including the charity Buglife, which praised the “robust stance”.

The issue is unlikely to disappear anytime soon. The European Commission told the BBC that it would continue to press forward with plans for a moratorium.

A spokesman said they were planning to appeal against the recently rejected ban.

In the US, the Environmental Protection Agency is being sued by beekeepers and environmental groups over its “failure” to protect pollinators from neonicotinoids.