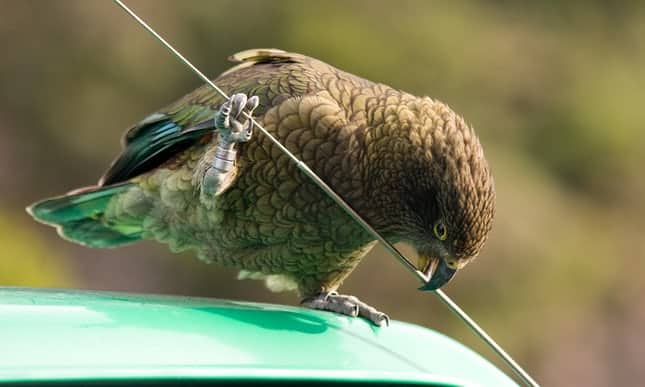 Bird experts in New Zealand have designed a special gym for the country’s playful alpine parrot to keep them away from some of the nation’s most dangerous roads.

For the last couple of years contractors working on the road to Milford Sound in the South Island have captured footage of keas moving their road cones and equipment into the middle of the road when the workers knocked off overnight.

The kea – dubbed the world’s smartest parrot by the BBC – are the planet’s only alpine parrot and have a high IQ, novelty-seeking nature and notorious mischievous streak.

Kea Conservation Trust chair Tamsin Orr-Walker said the birds were probably moving the road cones for fun, but didn’t discount the theory that the clever parrots strategically moved the cones into the path of oncoming vehicles, forcing the cars to slow down and allowing the parrots to beg for food.

Concerned for the bird’s safety, keas are endangered in New Zealand and were last year voted the country’s favourite bird, a team of kea experts have created a roadside exercise gym for the curious birds, designed to keep them intellectually engaged and away from road cones and traffic.

A clip from the BBC’s “The Smartest Parrot”.

Department of Conservation partnerships ranger Sue Streatfield told Stuff that dozens of keas were hit and killed every year on New Zealand roads, and kea gyms were catching on in other parts of the country too, including Nelson and Arthur’s Pass.

Cameras monitor the Milford kea gym and the footage is being reviewed by academics at the University of Canterbury who are trying to create new methods to stimulate the kea’s active mind, as the bird can turn destructive if bored or in close proximity to humans.

Keas are found only in the mountains of the South Island in a vast habitat of some 3.5m hectares. They once numbered in the hundreds of thousands but are now classified as nationally endangered with between 3,000 and 7,000 birds remaining.

Despite their protected status, keas have divided New Zealanders between those who enjoy the cheeky parrot’s animated nature and those who curse its destructive habits such as damaging cars, tents and buildings in alpine environments, attacking stock and habitually stealing food.

This article was first published by The Guardian on 11 Jan 2018.