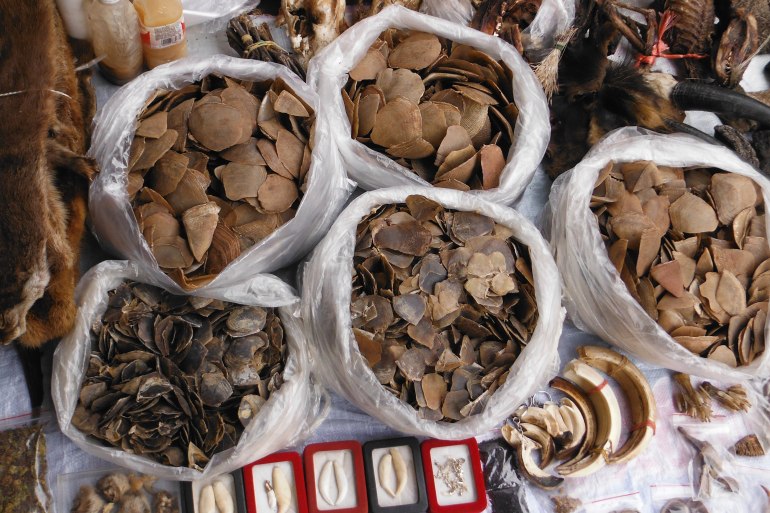 A new study by TRAFFIC, a group that monitors the illegal trade in wildlife, has found thousands of animal parts and products – from pangolin scales to ivory and bear bile – for sale in five countries in mainland Southeast Asia, underlining the region’s struggle to address wildlife crime and the need to intensify anti-trafficking efforts.

The group says its researchers found close to 78,000 illegal wildlife parts and products for sale in more than 1,000 outlets in select towns and cities in Cambodia, Laos, Vietnam, Thailand and Myanmar throughout 2019 and 2020.

The parts and products originated from a wide array of animals including bears, big cats, helmeted hornbills and pangolins, but TRAFFIC said ivory products were among the most prominent.

Individual species, many of them endangered, were found to have been used for multiple products. Researchers found pangolin scales both raw and ground for medicinal use, as well as made into jewellery or talismans. The pangolin is said to be the world’s most trafficked mammal.
“The variety and prevalence of illegal wildlife trade in several locations emphasised that the circumstances facilitating illegal trade have not only remained but, in some cases, proliferated,” Agkillah Maniam, a TRAFFIC consultant said in a statement.

The lower Mekong region has long been recognised as a hub for the illegal wildlife trade and has been a focus of efforts to improve enforcement and policy interventions, as well as providing officials with the tools to effectively combat such crimes.

Poachers operating in Malaysia’s forests, often from Vietnam or Cambodia and working for buyers in China and elsewhere in the region, are blamed for helping push the Malayan tiger to the brink of extinction.

TRAFFIC’s research found that wildlife markets across the five Mekong countries continue to operate in the open, including in the Special Economic Zones (SEZs) that governments have set up to boost foreign investment and create jobs.

“It would be naïve to think that the pandemic alone will dampen wildlife crime in the long term,” said Kanitha Krishnasamy, director for TRAFFIC in Southeast Asia. “Monitoring and investigations must continue.

“There’s also a need for strengthening collaboration and public commitment from all governments in the region. The illicit wildlife trade problem here is not something countries can tackle on their own.”

This article was first published by Aljazeera on 4 June 2021. Lead Image: Pangolin scales for sale in a market in Mong La in Myanmar [Courtesy of Chris R Shepherd/TRAFFIC].