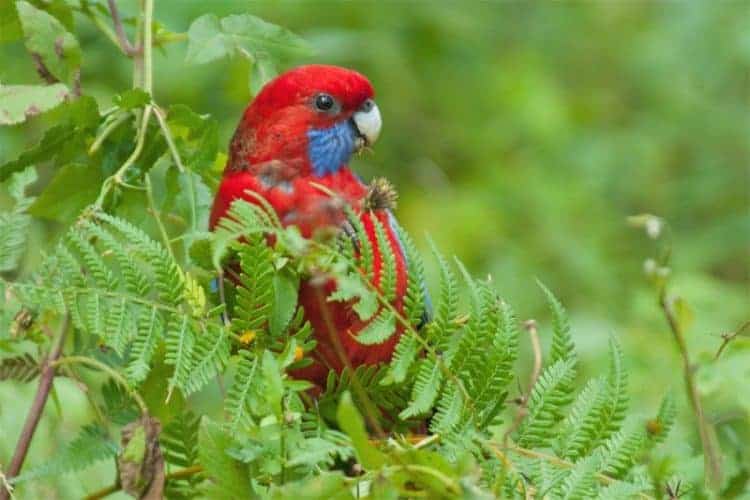 After weeks of rainy weather the sun has finally come out in Sydney and to celebrate I headed out to Royal National Park to hike along the coastline and to do a bit of birdwatching along the way.

I took a train to Otford and the birdwatching started before I even got to the park. A flock of Crimson rosellas was noisily feeding on the fire trail next to the train station.

The first part of the Palm Jungle loop track took me through some wet eucalypt forest where the understory was alive with Fairy wrens, Eastern spinebills, Eastern whipbirds, Brown thornbills and Eastern yellow robins.

On approach to the actual palm jungle a Rockwarbler jumped erratically across the path. This species is not much to look at, but being the only bird species endemic to NSW it is always a good find.

In the past I have seen Superb Lyrebirds in Palm Jungle and I was keen to try to find them again.  However, this part of the trail is quite steep and narrow and it forces you to keep your eyes on the ground, rather than on the surrounding forest. Thankfully you can still listen out for the scraping sounds in the bush. But as hard as I tried, all I got was a Green catbird that swiftly flew across the path and disappeared in the dense undergrowth.

Once the trail climbed up to the headland, the birdlife picked up again with a few Little Wattlebirds, New Holland honeyeaters, brown thornbills and eastern spinebills.

For the last 5 kilometres the track followed a fire trail through eucalypt forest again and turned up a few Yellow-faced honeyeaters, a couple of Laughing kookaburras and Australian ravens.

Follow this link to the detailed review of the Palm Jungle walking trail itself.