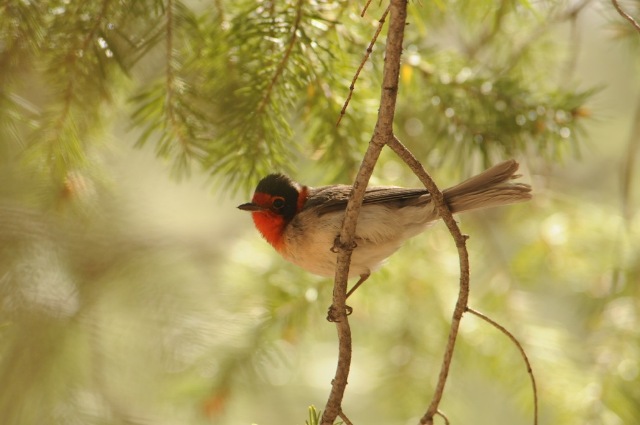 “The first sparrow of spring! The year beginning with younger hope than ever! The faint silvery warblings heard over the partially bare and moist fields from the bluebird, the song sparrow, and the red-wing, as if the last flakes of winter tinkled as they fell! What at such a time are histories, chronologies, traditions, and all written revelations?” — Henry David Thoreau, 1847

Thank you for that, Mr. Thoreau. Our yearly calendar of the natural world has always filled with the anticipation of the arrival of migratory birds in the spring. For most of us, the Spring Equinox signals a renewal and the promise of warmer weather. For bird watchers especially, knowing the when and where of spring migration is part of the seasonal rhythm.

I experienced this rhythm in the course of personal and business trips this spring. In my native Oregon, I saw the establishment of territories by the red-winged blackbird (Thoreau’s “red-wing” comes early, at the end of January). In New Mexico, my former thesis adviser David Ligon and I went to the Magdalena Mountains outside Socorro to find the striking red-faced warbler in early May. More recently, in Alaska’s Kenai Fjords National Park on a field trip amid long meetings, I saw Kittlitz’s murrelets foraging in their tidewater glacier habitat.

I remember my early bird-watching days, armed with an Audubon Society of Corvallis leaflet of typical arrival dates and finding the solitary sandpiper exactly as indicated, on May 14. And yet that joyful experience of spring birds’ annual arrival, which stirred Thoreau and so many others, is being reshaped by the changing climate. Global warming may lend itself to a distracting political controversy, but it is an inexorable scientific certainty and the world of birds are conspicuous indicators of changes it is bringing.

Many spring birds are migrating and breeding earlier, and their ranges are moving northward as climate and resulting habitat conditions shift accordingly. The calendar and geographies of birds are a now a moving target. It is a variable picture, with new conservation concerns arising.

High-elevation songbirds, like rosy finches of the Rocky Mountains, are running out of “up” as they risk losing their key alpine habitats. High latitude birds, like the yellow-billed loon of Arctic Alaska, may run out of northern tundra because the climate is becoming more boreal-like.

Yet that simple overview masks considerable complexity in understanding just how the changing climate directly and, perhaps more importantly, indirectly (through ecological interactions) shifts the world of birds. A miscellany of recent studies of birds and the changing climate reveal that the new threat to birds is not simply warmer temperatures, but rather the unexpected climatological and ecological interactions that result.

That many migratory birds, particularly those of high latitudes, are arriving earlier in the spring and commencing breeding earlier is unarguable. This is particularly evident for shorebirds that we have studied in Arctic Alaska over the past decade.

Yet if these birds are appearing sooner due to milder winters and earlier spring weather, it is not clear whether the calendar of insect emergence so critical to newly hatched chicks is likewise moving up. In the jargon of scientists, there may be a “phenological mismatch” of essential resource emergence that places migratory bird hatchlings out of synch with their larval prey in the northern world.

Red-winged blackbirds are also arriving a bit earlier in the spring (January in the northwest; March in the northeast). Their decline in the heart of our country appears correlated with the changing North Atlantic Oscillation, a large scale driver of climate and a phenomenon that is itself being altered by our changing climate. Ontario populations are declining amid warmer, wetter winters caused by shifts in the oscillation. The associated ecological and behavioral changes of the blackbird are varied and the causal influences of decline are not completely clear.

Southwestern birds like the resplendent red-faced warbler are likely to move further north, yet because of a series of climate-mediated changes face an uncertain future. The same warm temperatures promoting northward movement of birds are also allowing greater access to higher elevation grazing for much of the year by elk. Overgrazing by elk reduces habitat and makes songbird nests like those of the warbler and other species more susceptible to nest predators. As the climate moves warblers north and elk uphill, the collision of their adaptive strategies is leading to unexpected outcomes.

The Kittlitz’s murrelets I saw (again!) in Alaska were observed in their specialized foraging habitat of tidewater glaciers. You will immediately recognize that receding glaciers are one of the more visible and measurable effects of the changing climate.

When these tidewater glaciers recede, as I saw a few years ago in Icy Bay with colleagues Michelle Kissling and Scott Gende, the moraine attracts new vegetation and new wildlife species. Among those invading the previously ice-dominated environs are peregrine falcons, which find the murrelets easy prey when the smaller birds fly up to their high elevation nests.

Mr. Thoreau, I wish I could share the hope of the newer spring in our changing world! What indeed, as he so sagely wrote, “at such a time are histories, chronologies, traditions, and all written revelations?”

This article was written by Steve Zack, Coordinator of Bird Conservation, Wildlife Conservation Society, for the Huffington Post.