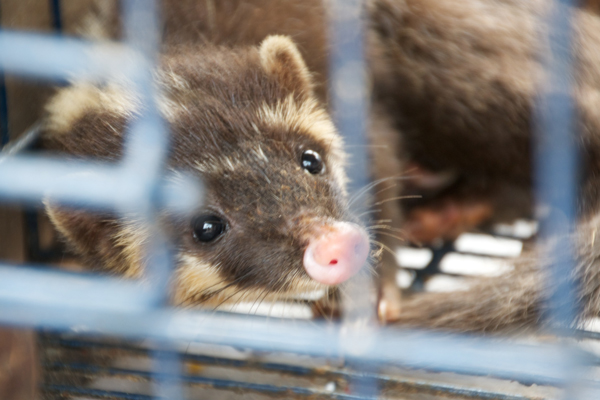 Few people have ever heard of the Javan ferret-badger, but that hasn’t stopped this animal – little-known even to scientists – from being sold in open markets in Jakarta according to a new paper in Small Carnivore Conservation. The Javan ferret-badger (Melogale orientalis) is one of five species in the ferret-badger family, which are smaller than proper badgers with long bushy tails and elongated faces; all five species are found in Asia.

“Very little is known about this species—one of the least known small carnivores in Asia. It is endemic endemic to the island of Java where it occurs in tall forests, although it may be somewhat adaptable to human-altered habitats as well,” the paper’s author, Chris Shepherd the deputy regional director with anti-wildlife crime NGO TRAFFIC, told mongabay.com.

While walking Jakarta’s Jati Negara market in June of last year, Shepherd documented five Javan ferret-badgers for sale. That the species was being sold was notable, since it is rarely documented even in the wild.

“Like many animals in Indonesia, the Javan ferret-badger is traded as a novelty pet,” Shepherd says. Yet next-to-nothing is known about the animal’s dietary requirements or natural history, making any captive situation problematic.

Shepherd says that while the Javan ferret-badger isn’t a strictly protected species in Indonesia, it is illegal to take them from the wild.

“Currently, the Javan Ferret Badger is provided with some protection, as there is no quota for its capture from the wild, and therefore none should be ending up in the markets,” he says. “Further legal protection, with higher deterrents, should be provided. But not just on paper. Far too often, species in Indonesia are provided with legal protection, but trade continues openly in the markets. One only has to pay a visit to any of the large markets in Jakarta to see illegal wildlife trade—slow loris, leopard cats, eagles, and more—all openly offered for sale.”

The species is so cryptic, that the IUCN Red List has categorized it as Data Deficient, noting “almost no available contemporary information on status, threats or distribution.”

Shepherd concludes that since this species is “known only from a few specimens” it is “badly in need of more research, and immediate protection.”