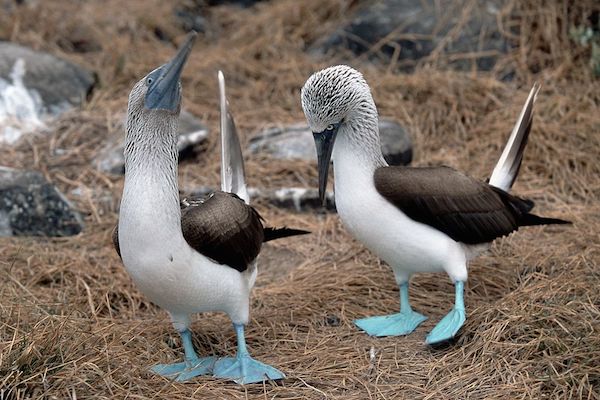 The iconic blue-footed booby (Sula nebouxii) of the Galapagos Islands has suffered a population decline of 50 percent in less than 20 years, according to research conducted by biologists from Wake Forest University.

The study, which appeared in the journal Avian Conservation and Ecology, suggests the unexplained disappearance of sardines from the birds’ diet is the primary reason for drop in numbers.

Professor Dave Anderson, lead investigator of the study, said that the approximate population of 6,423 boobies in 2012 is less than a third of the population recorded in the 1960s.

“It is alarming,” Anderson said. “There has been a drastic change from the 1980s and 1990s, when young blue-foots were common throughout the archipelago. Until 1997 there were literally thousands of boobies at breeding colonies and hundreds of nests full of hatching chicks. Then, suddenly, the boobies weren’t there.”

Relatively few booby pairs bred from 2011 to 2013, and almost no juvenile birds were observed during the study.

Researchers suspect a lack of sardines, a highly nutritious and previously easy-to-find food source, is the reason the booby population has plummeted.

Previous studies conducted at booby colonies show successful breeding occurs only when the birds had a diet consisting almost entirely of sardines. But over the course of the Galapagos study, sardines dropped to less than half of the boobies’ diet.

Johannah Barry, President of the Galapagos Conservancy, which provided funding for the study, said the next step is to ascertain why sardine numbers are dropping.

“Are they being overfished?” Barry said. “Are they leaving Galapagos waters due to climate change and other pressures? And if they are leaving, what other fauna might be impacted?”

Elsewhere in the eastern Pacific Ocean, sardine numbers have decreased significantly in the last 15 years as part of a natural cycle. This cyclic change provides a possible explanation for the decrease in booby numbers.

Anderson stressed that further studies must be undertaken soon, as two decades of booby decline means the population is aging without any younger birds to replace those that are dying.

This article was written by Paul Sutherland for Mongabay.com