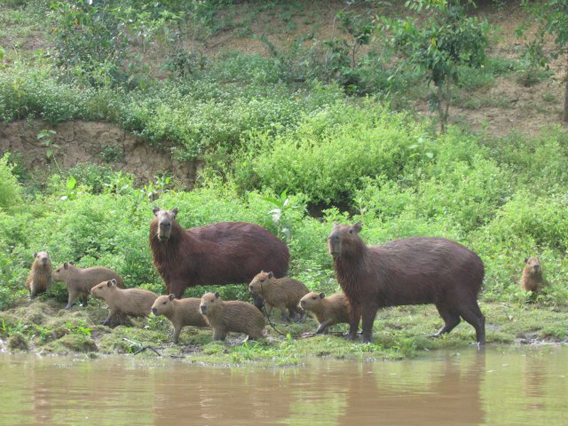 Bolivia continues to be a champion for Amazonian conservation. On February 2, 2013, Bolivia celebrated World Wetlands Day with the designation of more than 6.9 million hectares of the Llanos de Moxos to the Ramsar Convention’s Wetlands of International Importance. In addition to being the largest Ramsar designation to date, Bolivia now claims 14.8 million hectares of protected wetland, making it the leading Contracting Party out of 164 participating countries in terms of Ramsar site surface area.

The Ramsar Convention is an intergovernmental treaty committed to preserving and ensuring the “wise” and “sustainable use” of wetlands. To qualify for a designation, a wetland is evaluated according to the international significance of its ecology, botany, zoology, limnology or hydrology. In the case of the Llanos de Moxos, the technical studies were conducted by the World Wildlife Fund (WWF).

Located near the borders of Boliva, Brazil, and Peru, the Llanos de Moxos wetland consists of tropical savannas that alternate between periods of flooding and drought. The three rivers that flow through the region—the western Beni, central Mamoré, and the eastern Iténez, or Guaporé—converge to form the Amazon River’s major southern tributary, the Madiera River. It contains seven indigenous territories, eight legally protected areas, and a multitude of wildlife, including the endangered Bolivian river dolphin (Inia geoffrensis boliviensis).

Locally known as the Bufeo, the Bolivian river dolphin is one of the many species benefiting from Bolivia’s commitment to conservation. Just last year, the government promulgated a law declaring the Bufeo a National Natural Hetitage, with strong support from the people in the region of Beni, where the river dolphin is found.

Currently, threats to the wetlands include pesticide runoff and land clearing from agriculture in the area, with the potential threats of bad road planning, hydropower, and irrigation infrastructure like dams and drainage systems. However, WWF’s Bolivian rep, Luis Pabón, says the declaration of these wetlands as Ramsar sites should help local and sub-national governments put criteria in place to better ensure the conservation of the wetland and its resources. He adds that “the recurrent floods that inundate almost the entire area and beyond (around 100,000 square kilomters) every year make up a natural barrier to human intervention, as the development of infrastructure is extremely expensive and prone to deteriorate or even collapse during the rainy season.”

The Ramsar designation also marks a significant step forward for Amazonian wetland conservation, which is underrepresented in the Ramsar List, and serves to reiterate the Bolivian government’s dedication to preserving its natural resources and biodiverse ecosystems.

“We recognize the significant role of these wetlands in the conservation of Mother Earth, as well as the importance of the declaration confirming the Llanos de Moxos as internationally protected wetlands,” states Juan Pablo Cardozo Arnez, Bolivian Deputy Minister for the Environment. “Echoing the words of our President Evo Morales, we call upon all countries to incorporate [environmental] rights into their legislation and to comply with existing international agreements in this respect, so that human beings can begin to live in complete harmony and equilibrium with Mother Earth.”

Hi,
The wetlands have a very important ecological function as a “blotting paper” the regulate variations in water levels. The mistake by many European lands where the river shores have been Concreted leading to urban flooding as the “blotting paper” effect disappears.