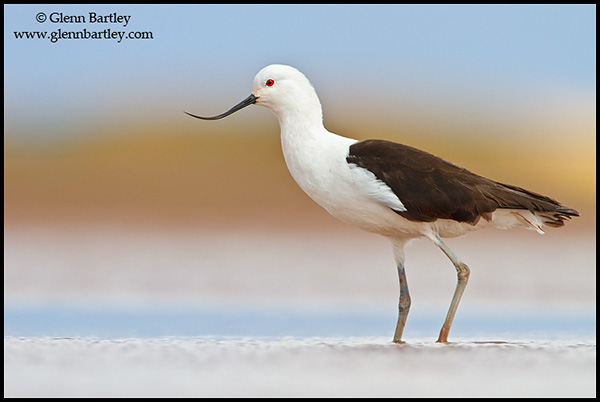 The original plan was to spend the next 2-3 days along the Chapare road looking for all the goodies there. Unfortunately the protest was raging on. Angry locals had blocked the road, flipped over police cars and set them on fire and the smell of tear gas was heavy in the air. It wasn’t that difficult of a decision to move on and skip this area even though it meant missing a few good birds.

I drove towards and past the town o fOruro and to the Lago Uru-Uru. Here I had a messy day of shooting all three Flamingo species as well as Andean Avocet and a few migrant shorebirds. Its always fun to get down and crawl in the mud. Well…as long as you get the shot. Otherwise it is just loco!

Onwards I traveled in the direction of La Paz for the final phase of the trip. The first site to be visited was just a half hour or so from the city. Here up in the puna habitat I was able to coax out Streak-throated Canastero, Plumbeous Sierra-Finch before descending to the Cotopata Trail. The rain was looming so there wasn’t much time to search for birds. In the first 200 metres of the trail I was able to find some cooperative Three-striped Hemispinguses and a Rufous-backed Chat Tyrant and heard the persistent calling of a Diademed Tapaculo. Alas, the skies opened up and I retired to the town of Coroico for the night.

The following day there was a National census taking place and I was informed that I would not be able to drive anywhere. Great! Thankfully Coroico is set in an area where you can hit the trails and wander in to some decent habitat. Not too far out of town I was able to nail Black-faced Tanagers and Variable Antshrikes. This was a great relief after assuming that the day would be a total loss. Back at the hotel I had a good look at a stunning male Swallow Tanager and some Speckled Chachalacas to finish the day.

Sometimes on photo trips you hit patches of bad luck. It felt like I was just grinding it out for the past week or so. It’s not that I wasn’t getting good images. I was just having to work really hard for them and also deal with all of the protests, censuses, flat tires, smashed bumpers, etc, etc. Perseverance always pays off though and I always try to think that if you can just hang in there you will be rewarded.

On November 22 I had one of those epic days of photography that is sure to live long in the memory. Starting out before dawn in Coroico I headed up the main road to the infamous “road of death”. As the sun began to shine the first images of the day materialized as a pair of very tame Mountain Caracaras cooperatively posed for me on a gorgeous perch. A great way to start the day! From then on the pace of the day picked up to an almost dizzying pace. A roadside flock held Scarlet-bellied and Hooded Mountain Tanagers. Not one, or two, but FOUR Hooded Mountain Toucans emerged from the cloud forests to pose for my camera. Mountain Wrens, Band-tailed Fruiteaters and Black Thistletails were all giving amazing photo opportunities. It wasn’t even lunch yet!!! Next up was a charismatic White-collared Jay who cooperated nicely and I finished the day with Superciliaried Hemispingus and, better yet, Orange-browed Hemispingus. What an insane day!!!