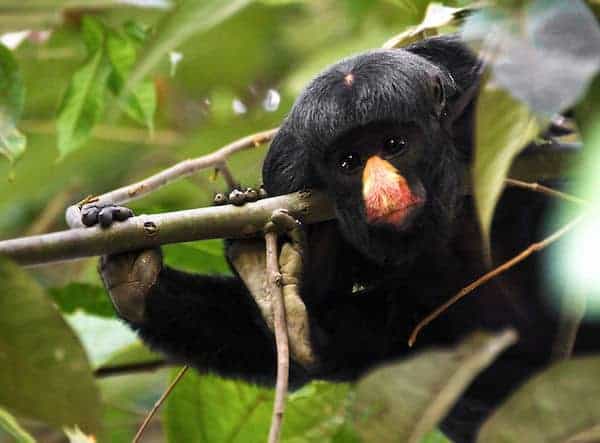 Earlier this week, the Brazilian government announced the declaration of a new federal reserve deep in the Amazon rainforest. The protections conferred by the move will ban deforestation, reduce carbon emissions, and help safeguard the area’s renowned wildlife.

The area is home to hundreds of species of animals, including 13 primate and 600 bird species. Of the area’s primates, several are considered threatened with extinction by the IUCN. The red-nosed saki (Chiropotes albinasus), is one of these. Listed as Endangered, the distinctive species needs large tracts of continuous forest, something that is becoming increasingly rare as deforestation fragments its range. One of the biggest threats to the saki is the development of roads into the area, which has brought with them an influx of soybean farms. This sort of activity will be forbidden in Alto Maues.

For conservation groups, the declaration of a reserve is a boon for area wildlife.

“This is essential to protect unique Amazon species, such as some types of primates,” Mauro Armelin, a WWF conservationist, told Reuters.

However, the creation of the reserve was not motivated entirely for habitat protection. It is actually part of Brazil’s climate policy. By granting federal protection to the area and thereby preventing large-scale clearing activities, the country hopes to reduce its greenhouse gas emissions. Unlike most other countries whose carbon emissions are due primarily to the burning of fossil fuels, Brazil’s largely comes from deforestation, which releases into the atmosphere carbon that had been locked up by trees.

Once the world’s biggest deforester, Brazil has made huge gains in reducing forest loss, with a 70 percent drop in deforestation recorded over the past decade–saving an area of forest roughly the size of Maine. A study published in Science earlier this year found this deforestation reduction prevented the release of about 3.2 billion tons of CO2 emissions – the equivalent of removing all cars in the U.S. for three years.

Yet, deforestation does still continue in Brazil, with Global Forest Watch data showing forest loss of more than 34 million hectares from 2001 through 2012 – or more than 6 percent of the country’s tree cover. The new Alto Maues reserve lies in the western state of Amazonas, at its border with Para. Together the two states lost more than 640,000 hectares of forest in 2012 alone. While the forest contained within Alto Maues has been untouched by human development, Global Forest Watch shows clearing encroaching into the area, with about 50,000 hectares lost in 2012 within a radius of about 150 kilometers (100 miles) from the new reserve.

While designation as a Protected Area does provide certain safeguards, it’s not an all-out guarantee. For instance, an Environmental Protection Area about 400 kilometers (240 miles) from Alto Maues lost 361,000 hectares of tree cover from 2001 through 2012, according to Global Forest watch.

This article was first published by Mongabay.com on 23 Oct 2014.

Delaware is among the smallest states in the United States. This is literally a drop of protection into a very SEA of real need! Of course something is better than nothing…but it's such a tiny bit OF something! Why not more such as, say the size of the state of Alaska?! Now THAT would be more like it!

Being the Amazon as big as it is, protecting an area the size of Delaware is… a joke!

Heading is only helpful if one knows how big Delaware is. Frankly, I couldn't pin it on a map. Which is my ignorance, but shows also that references need to be culturally appropriate to the readership.